From “hard power” to “soft power” and back again: Turkish foreign policy in the Middle East 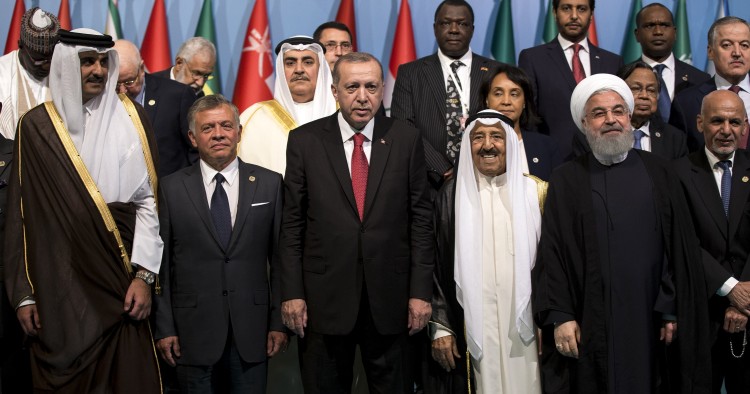 Turkey’s foreign policy has come full circle in the last few years. In the 1990s, its regional policy was mostly military, little diplomacy. Over the course of the decade, Turkey launched one of the largest military operations in its history against the bases of the Kurdistan Workers’ Party (PKK) in northern Iraq, came close to military confrontations with Greece and Syria, and threatened military action against Cyprus and Iran. In the eyes of many, Turkey in the 90s was a “post-Cold War warrior.” The rise of Recep Tayyip Erdogan’s Justice and Development Party (AKP) in 2002 brought about a new era in Turkey’s foreign policy. The “post-Cold War warrior” became a “soft power,” and the militaristic outlook on the region gave way to a focus on diplomacy, trade, and cultural engagement. The Arab uprisings that began in 2010, however, as well as domestic developments, forced another change in Turkey’s relations with the region. Military engagement has regained currency as a tool to project Turkey’s power. From Syria and Iraq to Qatar, Kuwait, and Somalia, Turkey has extended its military muscle. But for a country that aspires to lead the region, relying on military might alone isn’t enough. If Turkey wants to carve out a sphere of influence, it needs non-military tools as well, such as trade, cultural engagement, and an inspiring story to tell the peoples of the region. Those tools were once available to Turkey, but they aren’t anymore.

The golden years of Turkey’s engagement with the Middle East came about before the Arab uprisings. By the time the uprisings spread across the region in 2011, Turkey had developed close political, economic, and cultural ties with almost all countries in the Middle East and was well on its way to becoming a regional superpower. A number of regional and domestic developments paved the way for Turkey’s ascendancy. Thanks to the rise of an Islamist-rooted party and an academic-turned-diplomat, Ahmet Davutoglu, who advocated closer ties with the region, the long-standing historical enmity between Turks and Arabs had been slowly giving way to a cultural rapprochement. Turkey’s image in the Arab world as a Western stooge that turned its back on its Islamic heritage started waning. As Turks rediscovered their Ottoman heritage under the AKP, the image of Arabs as “traitors who stabbed the Turks in the back” during World War I, when they allied with the British against the Ottoman Empire, began to change. Calls for more engagement with the former Ottoman territories became louder.

Turkey embarked on a mission to make the heir of the Ottoman Empire great again. To Davutoglu, the “new Turkey” under the AKP had a real shot at becoming the regional superpower. It set an example for the rest of the Middle East as a Muslim nation that was democratic, secular, integrated into the world economy, and part of key Western institutions like NATO. Using trade and Turkey’s historical, social, and cultural links to the region was the key to ushering in a new era in its relations with the Middle East.

Trade became an important pillar of Turkey’s regional policy. The country’s new elites were accompanied by hundreds of businessmen on their official visits. Turkish products filled the shelves. Turkey became active in diplomacy across the Middle East, and played a key role in regional institutions. It mediated between different Palestinian factions, Syria and Israel, Afghanistan and Pakistan, and Iran and the West. Turkey played an active role in the Lebanese conflict, mediating between different parties and contributing troops to UNIFIL II.

The Middle East welcomed the “new Turkey” and its newfound involvement in the region. At a time of increasing popular frustration with countries’ stagnant economies and lack of political freedoms, peoples of the region saw Turkey as a success story. Turkish soap operas became popular with viewers across the Middle East, and Arab tourists flocked to Turkey. The regimes were also ready to rethink Turkey. They saw it as a strong regional partner that could enhance their interests. Turkey’s narrative of “Muslim solidarity” against Israel was well received. In 2010, then Turkish Prime Minister Erdogan was honored by the Saudi King Abdullah bin Abdulaziz with a prestigious award for his “service to Islam.” The prize underscored Saudi Arabia’s appreciation for the more critical stance Turkey had adopted towards Israel. The declining importance of Arab nationalism also eased Turkey’s reentry into the region with superpower aspirations. A speech by the then Turkish Foreign Minister Abdullah Gul, delivered to the Organization of the Islamic Conference in 2003, reflected the new mood in regional capitals. Gul’s remarks criticizing the Muslim world’s performance on democracy and human rights received a standing ovation.

The ascendancy of political Islam in the region provided Turkey a useful network to be exploited. The AKP leadership capitalized on its ties to Islamists across the Middle East, the roots of which date back to the 1950s, to further enhance its soft power. Turkey became a popular destination for Islamists, particularly the Muslim Brotherhood, to hold international conferences and engage in discussions about the future of political Islam. The Arab uprisings that gave the Muslim Brotherhood and its affiliates the chance to play vital roles in Egypt, Tunisia, and Libya were therefore welcomed by Turkey. Davutoglu called the uprisings the “Turkish spring,” hoping they would sweep away what he saw as the culturally alienated political elites in the region and bring Islamists to power.

In the early days of the uprisings, many thought that Davutoglu got it all right and that Turkey was on its way to becoming the regional hegemon. Those days are long gone now. The peaceful street protests have turned into civil wars in Libya, Yemen, and Syria. The Muslim Brotherhood’s short-lived government in Egypt was toppled by a coup that cast a long shadow on the future of political Islam. In the new regional order, regimes feel less secure and military force is seen as the most effective tool to achieve strategic objectives. Within this regional context, Turkey has little room to maneuver. Its increasingly nationalist rhetoric has rattled the region’s insecure regimes, which are worried about Turkey’s “imperial” agenda. Ankara’s continued support for the Muslim Brotherhood, which is considered a terrorist organization by Egypt, Saudi Arabia, and the UAE, adds insult to injury.

The Turkish brand the AKP has promoted as a model to the rest of the region is badly tarnished as well. Turkey has gone from a “Muslim democracy” to a populist autocracy. Erdogan, once hailed as a reformer who led his country forward, has consolidated power in his hands. Turkey’s relationship with the West, which was once an inspiration to the peoples of the region, is in tatters. Military engagement has become the only viable tool for Turkey to project power in the Middle East. Turkey launched two military operations into Syria in an effort to curb the Kurdish influence in the north. Its military presence and collaboration with Russia have secured it a say in the discussions on Syria’s future. Turkey increased its military presence in northern Iraq, which has made it an actor to reckon with. It also set up military bases in Qatar and Somalia, and signed a military cooperation agreement with Kuwait, all of which helped Turkey to build its political-military influence in the Gulf and the Red Sea.

Turkey’s military activism in the region amounts to a sea change in its regional outlook. It is no longer the soft power that it once was. Turkey now pursues a muscular regional policy sustained by military engagements. The Middle East has changed too: it is no longer the comfortable, familiar setting where Turkey’s new foreign policy elite felt at home. The century-old prejudices and enmity between Turks and Arabs are coming back.

Davutoglu thought that with the rise of the AKP, Turkey ascended to its proper place as the regional superpower and closed “the hundred-year-old parenthesis” in its history by breaking out of the isolation to which its secularist founding elite had confined it. As things stand today, it looks more like the golden age of Turkey’s engagement in the region under the AKP was the parenthesis and its regional policy has now come full circle.

The Strategies and Struggles of the Turkish Opposition under Autocratization

Turkish Views: Crisis and Opportunities for Turkey in 2023