The Hashd: Redrawing the Military and Political Map of Iraq 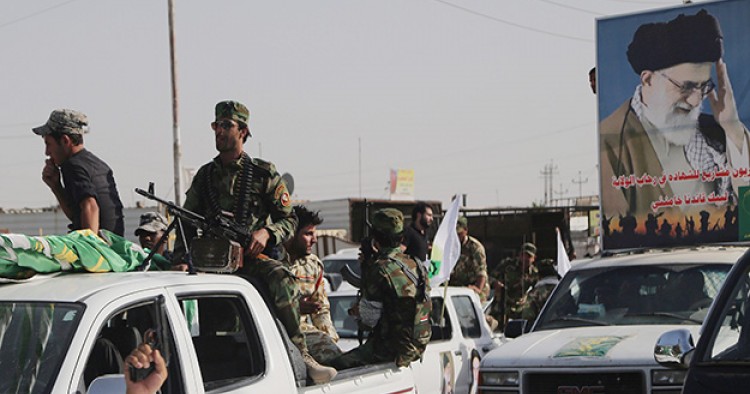 Al-Hashd al-Sha‘bi—also known as the Popular Mobilization Units, the Shi‘i militias, or simply “the Hashd”—has joined Iraqi security forces and the Kurdish peshmerga to spearhead Iraq’s ongoing offensive against ISIS. The coordinated assault has scored significant successes in various parts of Diyala, Babil, and Salah al-Din, including the recapture of Tikrit. With this string of recent triumphs, the Hashd has provided a potent rallying point for a reinvigorated sense of Iraqi nationalism, albeit one with distinctly Shi‘i overtones. One would have to go back to the early 1980s and the beginnings of the Iran-Iraq war to find similarly successful examples of jingoistic mass mobilization in Iraq.

Following the takeover of up to a third of the country by ISIS in the summer of 2014, the highest Shi‘i clerical authority, Grand Ayatollah Ali al-Sistani, called on Iraqis to join the security services to help repel the ISIS threat.[1] The resulting mass mobilization of Iraqi Shi‘a gave birth to the Hashd. In the first place, this included the hundreds of thousands of civilian volunteers, not all of whom could be absorbed by the state. Most of these volunteers have ended up in formations—such as Firqat al-Imam Ali and Firqat al-Abbas—organized by and answerable to the Shi‘i clerical authorities in Najaf and Karbala, and to the Iraqi state.

Perhaps even more consequential than the flood of civilian volunteers has been the involvement of trained and seasoned Shi‘i militias. These groups—including the Badr Corps, Asa’ib Ahl al-Haq, and Kata’ib Hezbollah—have varying degrees of support from and proximity to Iran. They have played a critical role in the fight against ISIS but have had a checkered past on the gruesome and divisive battlefields of Iraq and Syria.

The magnitude of the Hashd phenomenon, in terms of both the raw number of fighters and the group’s potency as a symbol of Iraqi strength, is such that it could potentially redraw not just Iraq’s military map but its political one as well. Indeed, given the Hashd’s popularity, it seems all but inevitable that an increasing number of Shi‘i political figures will try to position themselves as patrons of the Hashd. Already Vice President and former Prime Minister Nuri al-Maliki has baldly attempted to absorb the Hashd’s organic popular appeal.[2]

It is crucial that policymakers grasp the Hashd’s popularity in Iraq and the inescapable fact that some of its more pivotal—and some would say its more unsavory—elements will inevitably have a seat at Iraq’s political table in the near future. Rare is the Iraqi political actor who has anything with which to endear themselves to the Iraqi public beyond slogans, existential communal fears, and financial gain. This means that the Hashd, whose key constituent groups include paramilitary forces that are already firmly established in Iraqi politics, will be uniquely placed for political advancement should Iraq arrive at a “post-ISIS moment.” Along with their Iranian patrons, they are a force on the rise and will command a level of popular legitimacy that will be difficult to rival in Iraqi politics. To ignore this reality, no matter how unpalatable or inconvenient, is to risk increasing irrelevance in Iraq.

Many commentators have rightly raised questions about the Hashd’s composition and backing and what they could mean for Iraq and the region. While the pro-Hashd narrative focuses on civilian volunteers selflessly answering Sistani’s call to defend the country, not even the Hashd’s most ardent supporters deny the involvement of Shi‘i militias and Iran. Indeed, the importance of Iran’s role in Iraq’s fight against ISIS can scarcely be exaggerated, a fact that has naturally raised concerns about expanding Iranian influence.

However, these fears have often led observers to unrealistic and overly emotional conclusions about the Hashd’s role and objectives in Iraq. Some have even gone so far as to suggest equivalence between ISIS and the Shi‘i militias,[3] but while neither may be good news from a Western perspective, there is little room for direct comparison between the two groups.

The Hashd have unquestionably committed excesses—war crimes even—including the kidnapping and murder of many Sunni men and the wholesale destruction of Sunni villages.[4] But there is a difference between even these heinous acts and ISIS’s frank dedication to an ideology of genocide and slavery.[5] The equivalence that some insist on according ISIS and the Hashd belittles, for example, what befell the Yazidis at the hands of ISIS.[6] In contrast with ISIS’s genocidal violence against non-Sunnis, the Hashd has fought alongside—and at times even incorporated—Sunni, Christian, and regular forces.[7]

Insisting on the supposed equivalence between ISIS and the Hashd also overlooks the nature of these organizations. As a recent study of ISIS argues,[8] one of the group’s distinguishing features is that it is a “total organization,” which (as defined by sociologist Erving Goffman) enjoys more or less total control over its members’ everyday lives. Unlike the Hashd, ISIS follows in the bloodstained footprints of the Khmer Rouge, Maoist China, or the early Bolsheviks in trying to wipe out the existing social order and create an entirely new society in its stead.

We are thus dealing with a collection of militant organizations working alongside the Iraqi state on the one hand, and on the other we are confronted with a total organization. While both challenges must be met, there is too broad a difference for equivalence to be considered between an actor seeking strategic advantage within the regional order and one seeking to upend that same order.

From a Western strategic perspective, the Hashd poses a long-term risk in that its most powerful elements are allied with Iran, and as such the Hashd’s success aids Iran’s advancement in Iraq and the region. That Iran and its proxies are a strategic challenge to Western interests is beyond debate, just as Iran’s ability and track record to act as a destabilizing influence in the region is beyond debate. Yet for those who accepted the legitimacy of the Iraqi state and viewed the prevention of its collapse as a strategic objective, there simply was no readily available alternative to the Hashd phenomenon in the summer of 2014.

Finally, Shi‘i militias in Iraq do not present a global terrorist threat in the way that ISIS and their like do. The militias’ political and operational horizons are far more focused on Iraq and its immediate surroundings than on outlandish plans to unleash global havoc. For all their anti-Western saber rattling, neither ideology nor strategy would lead the likes of the Badr Corps or Asa’ib Ahl al-Haq to, for example, target the London underground with a mass casualty attack.

Western powers can currently only dream of matching Iran’s influence in Iraq. Remedying this situation is not beyond the diplomatic and military power of the United States but will require a significant investment of time and effort.[9] Until such an investment is made and until it begins to bear fruit, rolling back Iranian influence in Iraq will remain as ambitious as trying to roll back Saudi Arabian influence in Bahrain.

Looking to the future, the United States and others will have no alternative but to come to terms with the Hashd—and its Iranian backers—as a fact of Iraqi political and military life. It is too organic and too popular a phenomenon to be expunged from Iraq, and there is no viable alternate military counterweight to ISIS in Arab Iraq. However, what has yet to be decided is the Hashd’s relationship to, and role in, the Iraqi state.

At best, the United States and its allies will achieve only limited goals in Iraq, such as ensuring that the state and its security forces do not end up junior partners to elements of the Hashd, thereby mirroring the example of Hezbollah in Lebanon or the Iranian Revolutionary Guard Corps in Iran. It may already be too late to accomplish even that, however, and the task is made more difficult by the fuzziness of the line separating “state” from “Hashd." As has been the case in Iraq since 2003, it is not always clear where “the state” ends and the influence of independent militias begins. What is needed therefore is long-term and patient support to key factions within the Iraqi state—and here, as in much of the Middle East today, the United States is confronted with a list of bad options.

If the United States is serious about countering the many troubling trends in Iraq, it needs to match Iran’s strategic will, patience, and patronage. Every major Iraqi political actor seeks external support, yet none currently look to the West. Though it will be a politically costly and long-term endeavor, the United States must remedy this fundamental issue if it hopes to influence the course of Iraqi political and security development.

[6] Begikhani, “Why ISIS’s Treatment of Yazidi Women Must be Treated as Genocide.”