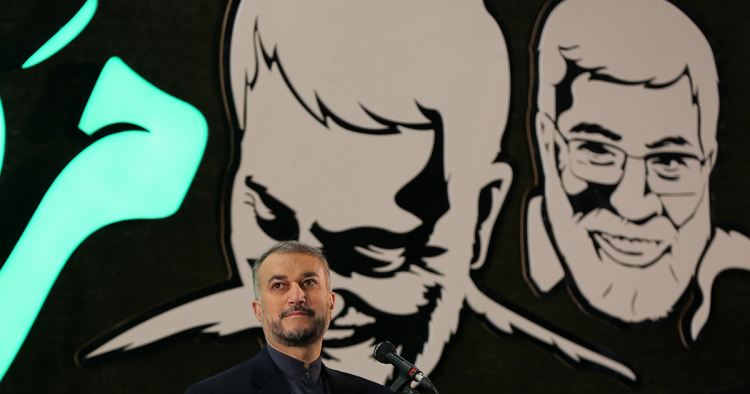 This is the first part of a two-part series. The second part is available here.

Hossein Amirabdollahian, Iran’s new foreign minister, is famous for his exceptionally close relationship with the Quds Force, the foreign operations branch of the Islamic Revolutionary Guard Corps (IRGC), as well as its regional allies.

Mr. Amirabdollahian, born in 1964, holds a PhD in international relations from the University of Tehran. At the time of his appointment to the post of foreign minister, he was the director-general of international affairs in Iran’s parliament, foreign policy advisor to the parliament speaker, one of the advisors to the Ministry of Foreign Affairs, and secretary-general of the Secretariat of the International Conference on Supporting the Palestinian Intifada. Until June 2016, Amirabdollahian was the deputy foreign minister for Arab and African countries, a position he had held since 2011, under the Ahmadinejad administration. Mr. Amirabdollahian was also Iran's ambassador to Bahrain from 2007 to 2010, and held key responsibilities regarding Iraq after the U.S. invasion: he was special assistant to the foreign minister for Iraqi affairs from 2003 to 2006, and was in charge of the Foreign Ministry’s special headquarters on Iraqi affairs from 2006 to 2007.

On Ayatollah Ali Khamenei's website, at least 10 analyses of Amirabdollahian can be found in the form of articles or exclusive interviews; this is unusual and noteworthy, as the publication of even a single exclusive analysis on this website is viewed as a significant privilege for an Iranian official. He is clearly closer to the supreme leader than his predecessor, Mohammad Javad Zarif. The new foreign minister is also more pessimistic about the West, friendlier toward Russia and China, and more determined to defend Iran-affiliated militia forces in the region than Zarif.

However, Amirabdollahian is viewed as not being as hardline as Saeed Jalili, Iran's top negotiator under Mahmoud Ahmadinejad, or Ali Bagheri, the deputy of international affairs of Iran’s judiciary. Bagheri, as one of the closest associates of Jalili, was Amirabdollahian’s rival for the position of foreign minister, and, like Jalili, is a staunch opponent of the Joint Comprehensive Plan of Action (JCPOA).

The new foreign minister can speak English, but videos of him talking to non-Iranians indicate his rather limited ability. As a result, he has generally preferred to speak to English-language networks with the help of an interpreter (for example, see here, here and here). At the same time, although his Arabic is clearly better than his English, he has usually used an interpreter during his interviews with Arabic networks as well (for example, see here, here and here).

In these new circumstances, Western officials may find negotiating with Tehran’s top diplomat more difficult than with his predecessor, not only because of his tougher political stance, but also due to his more limited language skills. Nevertheless, some optimistic analysts in Iran believe that closer relations between the supreme leader, on the one hand, and President Ebrahim Raisi and Amirabdollahian, on the other, might be useful in certain phases of the nuclear talks. They believe that if — and only if — the Iranian regime decides to reach an agreement with world powers in the future, the Raisi administration would face less opposition from hardliners, in comparison with the previous administration under Hassan Rouhani.

Amirabdollahian’s close ties to the Quds Force have repeatedly made news, especially during his time as deputy foreign minister for Arab and African countries as well as when he was in charge of Iraqi relations. This closeness was due primarily to the fact that the strategic policies of the Foreign Ministry in the Middle East must always be in line with the priorities of the Quds Force, such that even the Iranian ambassadors to countries in the region must be approved by the force.

But in addition to these more systematic connections, Mr. Amirabdollahian had a very personal relationship with the former commander of the Quds Force as well. Some of his narratives about Gen. Qassem Soleimani even demonstrate his strange fascination with the general. For example, in an interview for Ayatollah Khamenei’s website on May 23, 2020, Amirabdollahian claimed that Soleimani’s agents had infiltrated "the bedrooms of the senior officials of the Zionist regime." In a television interview on Dec. 31, 2020, Amirabdollahian quoted some Soleimani associates in Syria as saying, "During certain operations against the Zionist forces in the region, some nights the General came to our dreams and showed us the roadmap for the operation."

In another exclusive interview for Ayatollah Khamenei's website on Dec. 22, 2020, the diplomat emphasized his "face-to-face contacts with General Soleimani for nearly two decades," adding that he usually "received the latest advice from the General" before conducting crucial diplomatic talks. Amirabdollahian, for instance, spoke of applying Soleimani's advice during his trip to London in October 2015 to discuss bilateral and regional issues with British officials, as well as during his negotiations with Russian officials over Syria.

In another statement about his 2007 talks with the Americans — in the presence of Iraqi officials — the diplomat said that Soleimani instructed him and his colleagues on how to speak with the Americans during "tens of hours" of briefing sessions before the talks.

It should be noted that the 2007 talks between Iran and the United States on Iraq’s security took place after Ayatollah Khamenei, in an unprecedented comment on May 16, 2007, authorized the Foreign Ministry to hold face-to-face meetings with U.S. officials to "remind Americans of their commitment to Iraq's security." Following the leader’s green light, the Iranian and U.S. delegations held three rounds of trilateral talks in August 2007 where Amirabdollahian headed the Iranian delegation in some sessions.

In addition to his connections to the Quds Force, Amirabdollahian has always had special relations with the Islamic Republic’s anti-Israel proxies in the region as well. For instance, in a TV interview on March 2, 2018, he revealed his very close ties with Hassan Nasrallah, secretary-general of Hezbollah in Lebanon. "The first time I met him directly was in 2010, and since then I have seen him almost every few months," Amirabdollahian said. Noting that some of his meetings with Nasrallah had taken place at unusual times, such as 3 am, Amirabdollahian added, "The meetings we have together are between 3.5 to 6 hours on average." It is worth mentioning that the date of the above interview was about two years after Mr. Amirabdollahian’s removal from the post of deputy foreign minister, which indicated that the special relationship of the interviewee with the secretary-general of Hezbollah was outside his official capacity.

It was in line with this special relationship that on Jan. 13, 2019, following rumors of Nasrallah's heart attack, Amirabdollahian denied them from the position of an exclusive source, commenting that, "Undoubtedly, there will be no Zionists on the day when Hassan Nasrallah and the leaders of the Palestinian resistance will pray in al-Aqsa Mosque."

In general, emphasis on the downfall of Israel has been the subject of many of Amirabdollahian's comments on various occasions. Perhaps the clearest expression of his views on Israel can be found in his detailed interview for Ayatollah Khamenei’s website on May 23, 2020, during which he described Israel as a "cancer tumor" and a "fake regime," considering the "disappearance" of it necessary for the national security of Iran. In this interview, he made various references to the "final solution" to the Israeli problem, stressing that "when the Supreme Leader of the Revolution speaks of the final solution, he does not speak of a plan written on the clouds, but of a fully operational and feasible plan."

Amirabdollahian went on to explain that after the leader’s suggested referendum, a government would come to power in Palestine that would have the "special task" of "determining the fate of the uninvited guests who have occupied the Palestinian territories," i.e., Israel’s Jewish immigrants.