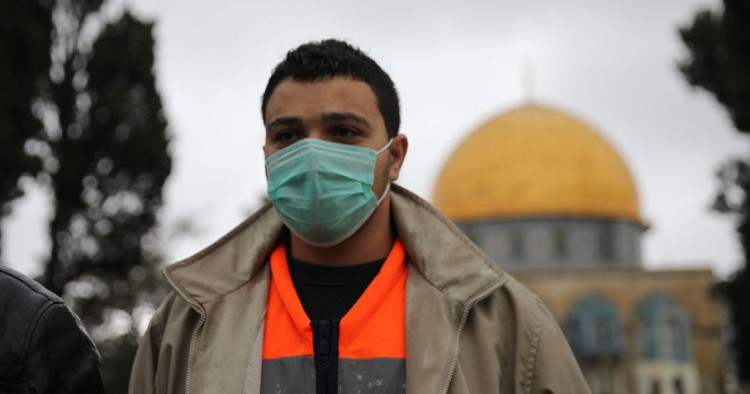 Less than a year after the U.S. State Department removed the term “occupation” from its 2019 human rights report, and just a few weeks after it stopped referring to the residents of East Jerusalem as Palestinians, the coronavirus has exposed the reality of Israel’s occupation of the Palestinian territories like never before. However, despite clearly set obligations under international humanitarian law, the Israeli military continues to flaunt its responsibilities — as the occupying power — to protect the roughly five million Palestinians living under its control in the West Bank, East Jerusalem, and the Gaza Strip.

Despite the fact that all local and global efforts have been focused on dealing with the deadly coronavirus, Israeli forces continue to use brute force to quell Palestinians.

Within a two-week period in March, Israeli forces shot and killed a 16-year-old Palestinian boy and injured another 132 Palestinians. Israeli forces carried out 78 search and arrest operations across the West Bank and arrested 110 Palestinians, including 16 children. In the Gaza Strip, on at least 28 occasions, Israeli forces fired warning shots in the areas adjacent to Israel’s perimeter fence and off the coast of Gaza.

The Palestinian government, established as a result of the 1993 Declaration of Principles signed by Israel and the Palestine Liberation Organization (PLO) on the White House lawn, has been trying heroically to deal with the pandemic in the roughly 40 percent of the occupied areas that it manages. However, the rest of the occupied territories have been ignored by Israel, which has paid attention to Jewish settlements but not the outlying Palestinian-populated areas. Palestinians have reported a spike in Jewish settler violence against them and their properties, as well as the uprooting of olive trees, during this emergency period, according to published reports.

Perhaps the best proof of the Israeli disregard for the occupied territories is seen in the attitude toward the Gaza Strip, which has been under an illegal blockade for over a decade. While the first confirmed coronavirus case in the West Bank was recorded on March 5, it took the Israeli military until March 22 to send the first batch of 200 testing kits to Gaza. March 22 was also the same day that the first confirmed cases of COVID-19 were reported in Gaza. The shortage of testing kits available to West Bank Palestinian health officials forced local officials to seek outside help. 3,000 kits and 50,000 surgical masks were delivered to the Ramallah-based Palestinian government by the World Health Organization (WHO) via Jordan on March 25, the same day that the first Palestinian death due to COVID-19 was reported by health officials.

The Fourth Geneva Convention, which was issued in 1949 and governs the treatment of civilians in times of war and under occupation, dictates (in article 56) that Israel, as an occupying power, is responsible for meeting the health needs of persons living under its military occupation.

The situation in occupied East Jerusalem is not much better. Although Israel has unilaterally annexed the Old City and other Jerusalem neighborhoods occupied in June 1967, the response to the coronavirus has effectively redrawn the Green Line by highlighting the stark inequality between how Israel treats its own citizens and those living in areas that it has controlled since 1967.

East Jerusalem is in the unenviable position of being both stateless and a political orphan. While Israel has prevented Jerusalem’s 350,000 residents from engaging with the Ramallah-based Palestinian leadership — physically, financially, politically, and in every other way — it has also failed to provide them with the necessary health care and attention. To fill the vacuum, a homegrown coalition of 72 local and international NGOs, known as the Jerusalem Alliance, has sprung up to confront the coronavirus crisis in East Jerusalem. Cooperating closely with local WHO representatives and medical experts, the voluntary group has organized disinfection efforts, carried out a wide-ranging social media awareness campaign, and convinced a local hotel to act as a site for a potential spike in cases of affected Jerusalemites. Instead of applauding this effort, however, Israeli officials arrested ten volunteers involved in disinfecting Al-Aqsa Mosque and the Old City (eight were later released). Moreover, Israeli officials have hinted that Palestinians in East Jerusalem might be barred from traveling to the western side of the city, which Israel routinely declares to be its “eternal and undivided” capital.

While the situation on the ground reflects the reality of the occupation, appeals to release Palestinian political prisoners and administrative detainees — particularly women, children, and more vulnerable older people — have likewise fallen on deaf ears. There are more than 5,000 Palestinians held in Israeli jails. Despite a call by six Israeli human rights organization to reduce the overcrowded and unhealthy prison conditions, Israel has only released 500 Jewish criminals to house arrest, while refusing to release any Palestinians. Prime Minister Mohammad Shtayyeh has called for the release of the nearly 80-year-old Foad Shobaki, who has been held in Israeli prison for three decades.

While Middle Eastern countries like Iran, Turkey, and Jordan, as well as others around the world, have released prisoners, the Israeli authorities have rejected these calls — in defiance of both Israeli and international law, which require care for the health of prisoners. This obstinance has continued even after some reports noted that at least four Palestinian prisoners may have caught the coronavirus from an Israeli integrator. Israel denies the existence of any confirmed cases of coronavirus in its prisons.

While the U.S. State Department may continue to deny that areas Israel captured in the 1967 war are occupied territories, Israel’s handling of the pandemic has demonstrated a very different reality on the ground. Not only are the West Bank, including East Jerusalem, and the Gaza Strip still occupied territories, as the occupying power Israel has an obligation under humanitarian law to look after the well-being of all the Palestinians under its legal responsibility.