How Far Can the Turkey-Russia Rapprochement in Syria Go? 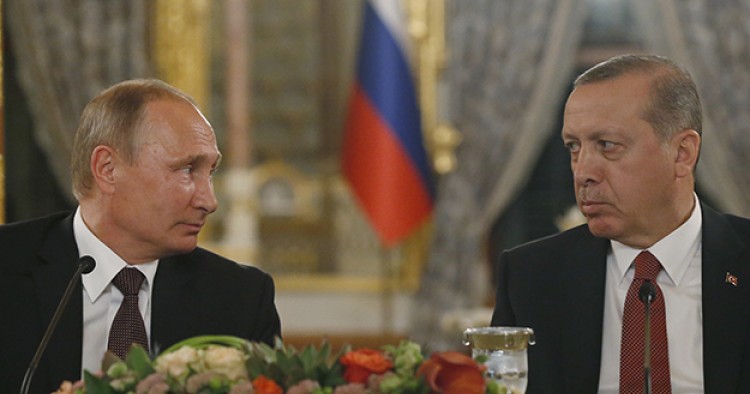 Tensions between Turkey and Russia are thawing, as both countries appear to be advancing reconciliation efforts. Beginning with Turkish President Recep Tayyip Erdogan’s apology to Russian President Vladimir Putin for downing a Russian jet last year, the nations have shown a political will to cultivate closer cooperation in Syria. But the question remains—how far can the rapprochement in Syria go?

Closer coordination between the two in Syria over the last few weeks has raised hopes. Until recently, Ankara was trying to convince Russia not to include Turkish-supported groups such as Jabhat al-Nusra and Ahrar al-Sham on its target list. But last week, Erdogan and Putin agreed to clear the al-Qaeda-affiliate Nusra front from Aleppo. Turkish Foreign Minister Mevlut Çavuşoğlu said Nusra must withdraw from military posts in Aleppo immediately, adding that Syrian opposition forces should separate itself from the terrorist group.

Erdogan has remained silent on the Russian/Assad regime operation in east Aleppo. In the opening of the new legislative year, Erdogan touched on the situation in Aleppo and blamed the West without mentioning the regime assault or Russian involvement.

In return, Russia seems to be turning a blind eye to Turkish bombing of Kurdish fighters around Aleppo. Last week, Turkish air strikes pounded a group of Y.P.G. fighters in three villages, northeast of the city of Aleppo. Given Russian control over the skies of northwestern Syria, Y.P.G. officials think it is unlikely Turkey initiated the strikes without informing Moscow.

While current moves in Syria indicate that Ankara and Moscow are willing to give concessions to advance their recent rapprochement, their cooperation has limits. Russia may have given Ankara the green light to strike Y.P.G. targets, but it is unknown whether Ankara can rely on Moscow to contain the Y.P.G. as Russia has a history of supporting its affiliate, the P.K.K.

The Soviet Union provided safe havens for the Kurds and facilitated Kurdish media and propaganda beginning in the 1940s. The now imprisoned leader of the P.K.K., Abdullah Ocalan, was offered shelter in Soviet-allied Syria until he was expelled and sought protection in Russia in 1998. The P.K.K. legally operated in post-Soviet Russia throughout the 1990s[AI1] [WU2] . Recently, Russia allowed the P.Y.D. to open an office in Moscow and used the Kurdish group to drive a wedge between Turkey and the United States.

Last spring, the Russian government said it had sent troops to fight alongside Kurdish units around Aleppo and that it intended to keep a foothold in the area by cultivating ties with Syrian Kurds through weapons, ammunition, and oil deals.

Another complicating factor in Turkey-Russia rapprochement could be Turkey’s eagerness to retake the ISIS-held town of al-Bab in Syria. The town is ISIS’ last major holding in the Aleppo province and recapturing it is crucial to retaking Raqqa and the fight for Aleppo. For the Kurds, al-Bab provides an opportunity to link their cantons in the east and the west to form a continuous autonomous zone. These Kurdish aspirations make al-Bab particularly significant for Ankara, which wants to block Kurdish efforts to establish a unified Kurdish zone along its southern border. The strategic importance of this town has the regime and its backers, the Free Syrian Army and its Turkish-backers, and the Kurdish-dominated Syrian Democratic Forces all competing to capture al-Bab. Turkey recently announced that the next aim of the operation "Euphrates Shield," which conquered Jarablus and other border areas with help from the Turkish army and a coalition of Arab rebels, is to retake al-Bab. But Russia is unlikely to grant Turkey its wish to take al-Bab, as doing so would place rebel fighters in striking distance of Aleppo, which the regime and Russia are currently trying to seize.

Russia is heavily committed to securing the regime gains around Aleppo. After the U.S. announced its suspension of talks with Russia on implementing the cessation of hostilities, the National Security Council reportedly started discussing possible strikes on Syria’s military to stop Syrian airstrikes around Aleppo. Moscow warned the United States that Russia had deployed S-300 and S-400 missile systems at its facilities in Syria. Escalating tensions between the United States and Russia in Syria has hardened Russia’s stance vis-à-vis Aleppo. Moscow will likely double down its efforts to defeat the opposition around Aleppo. If Moscow intensifies its military operations around the city, not only strengthening the regime but also causing more civilian casualties, can Ankara afford to remain silent?

Despite the euphoria about a “Turkey-Russia spring” in pro-government circles in Turkey, Ankara-Moscow rapprochement in Syria has its limits. Turkey’s push to take al-Bab might become the first litmus test to the newly reached modus vivendi between Moscow and Ankara in Syria.