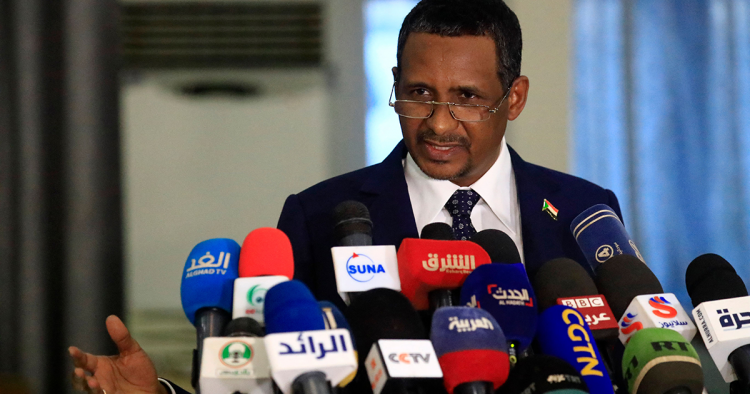 Official reactions in Africa to Russia’s invasion of Ukraine have varied dramatically from country to country. While stopping short of implementing sanctions, most African countries condemned Russia’s invasion in a March 2 U.N. General Assembly vote. A sizeable minority, however, abstained or subtly displayed solidarity with Moscow. Such polarization can be seen in the differing postures of Libya and Sudan, two countries hosting an informal Russian military presence. Libyan Foreign Minister Najla Mangoush’s Feb. 24 condemnation of Russia was followed up six days later by a statement from Libyan Prime Minister Fathi Bashagha decrying Russia’s invasion as “a clear violation of international law and the sovereignty of a democratic Ukraine.” Libya also voted to suspend Russia’s membership in the U.N. Human Rights Council (UNHRC) on April 7. Sudan by contrast has pursued a more cautious policy, abstaining from the UNHRC membership vote and limiting itself to appeals for “Russia-Ukraine dialogue.”

Despite its rapidly deteriorating economic outlook and the military stalemate in Ukraine, Russia remains committed to preserving its influence in Libya and Sudan. As secondary sanctions restrict Russia’s ability to engage with civilian authorities, Moscow’s strategies in both countries are likely to hinge on relations with military strongmen, such as Libya National Army (LNA) chief Khalifa Hifter and Sudan’s Sovereignty Council Deputy Chairman Mohamed Hamdan “Hemedti” Dagalo. These opaque partnerships, backed by Wagner Group private military contractors (PMCs), and the impact of the Ukraine war on food insecurity will likely increase tensions between Russia and civilian authorities in both Libya and Sudan.

After Libya’s elections were postponed on Dec. 23, Russia curried favor with Bashagha to shore up its influence in Libya. In December 2021, Wagner Group chief Yevgeny Prigozhin praised Bashagha as the only western Libyan politician who could rein in militias around Tripoli and called him a “true patriot.” After Bashagha was selected as prime minister designate on Feb. 10, the Russian Foreign Ministry expressed hope that he would “be able to unify Libyan society” and steer Libya toward national elections. This statement was noteworthy, as Russia was the first major power to endorse Bashagha’s takeover.

In light of the Libyan prime minister’s March 2 declaration, Russia’s olive branch was clearly not enough to make Bashagha forget his long-standing friction with Moscow. In February 2020, Bashagha urged the U.S. to counter Russia by establishing a base in Libya and as interior minister, he accused the Wagner Group of using chemical weapons in the country. In turn, Russian media outlets accused Bashagha of “kidnapping” political operatives Maxim Shugaley and Samer Seifan, who were released in December 2020, and the Prigozhin-aligned Federal News Agency labelled Bashagha “the leader of the Libyan terrorists.”

Although Russia subsequently broke with the consensus of neutrality in the U.N. Security Council by backing Bashagha, the Ukraine war could reignite tensions between Moscow and Tripoli. In 2020, Libya was the tenth largest purchaser of Ukrainian wheat globally, and war-induced supply disruptions have forced Libya to consider more expensive wheat imports from the U.S., Canada, Australia, and Argentina. While Bashagha was previously inclined to allow Russia to hold on to key military facilities, such as the Qardabiyah base near Sirte, Western pressure could encourage the Libyan prime minister to revert to his June 2020 vow that Qardabiyah would cease to be a Russian facility.

To hedge its bets, Russia is maintaining its long-standing partnership with the LNA. Ukrainian officials allege that Hifter agreed to covertly transfer LNA forces to Ukraine under the Wagner Group’s auspices. The LNA vigorously denied these allegations and, much like foreign fighters from Syria, Libyan forces have not entered the Ukraine war. Nevertheless, the Wagner Group remains entrenched in LNA-held areas, and Russia’s heavy casualties in Ukraine have not led to even a partial redeployment of these PMCs. As Turkey continues expanding its military training efforts in Libya, Russia’s parallel PMC presence is likely to remain in place for the foreseeable future.

What has the Ukraine war meant for Russia-Sudan relations?

Since the Ukraine war began, Russia has bolstered its partnership with Hemedti. On Feb. 23, Hemedti visited Moscow to strengthen economic cooperation between Russia and Sudan, especially in the fields of energy, agriculture, and mining. Hemedti also insisted that Russia’s invasion of Ukraine would not derail Sudan’s plans to host a Russian naval base on its 730-km Red Sea coast, and he visited Port Sudan, the likely site, on March 16. Hemedti’s trip abroad, which followed similar visits to the UAE, Ethiopia, and South Sudan, burnished his international profile and gave Russia access to a key Sudanese figure with whom it had not previously engaged in any meaningful way.

Although Sudan supported Russia’s annexation of Crimea in 2014, comparing Moscow’s territorial claims to its own designs on Abyei, a disputed area between Sudan and South Sudan, other Sudanese figures did not emulate Hemedti’s embrace of Moscow. Sovereignty Council chief Abdel Fattah el-Burhan’s refusal to acknowledge Hemedti’s meeting reflected tensions between the two men that have been rising since they both spearheaded the October 2021 coup. Rasha Awad, the editor of Sudanese media outlet Al Taghyeer, claimed that Hemedti visited Russia to position himself for his “own coup.” Meanwhile, Port Sudan residents, out of fear that a Russian military base would displace them, protested Hemedti’s visit to Sudan’s Red Sea coast by blocking streets and burning tires.

Economic factors could also restrict the scope of Russia-Sudan cooperation. Sudan imported over one-third of its wheat from Russia and Ukraine, and the compound impact of the war, coup, and poor harvests could plunge 20 million Sudanese into food insecurity. Rising food prices could trigger protests against Burhan and Hemedti, much like they did against long-time President Omar al-Bashir in 2018, and anti-Russian sentiments might rise if Russia does not supply Sudan with additional wheat. Up to 250 Sudanese military-controlled companies that have dealings with Russia could face secondary sanctions. In response, Russia may rely more heavily on illicit economic practices, such as its smuggling of around 30 tons of gold per year from Sudan. The Wagner Group’s presence and Hemedti’s acquiescence could facilitate smuggling, but public exposure of Russia’s sanctions-busting operations has further eroded Moscow’s reputation in Sudan.

As the Ukraine war drags on, Russia is unlikely to abandon or downsize its ambitions in Libya and Sudan. Its long-term influence in both countries, however, depends on opportunistic aspiring autocrats. Thus, Moscow would lose out if either nation takes a definitive step toward democracy.

Samuel Ramani is a tutor of Politics and International Relations at the University of Oxford, where he received his doctorate in March 2021, and an associate fellow at RUSI. His first book on Russia’s foreign policy towards Africa will be published by Oxford University Press and Hurst and Co. in 2022. Follow Samuel on Twitter @samramani2. The opinions expressed in this piece are his own.