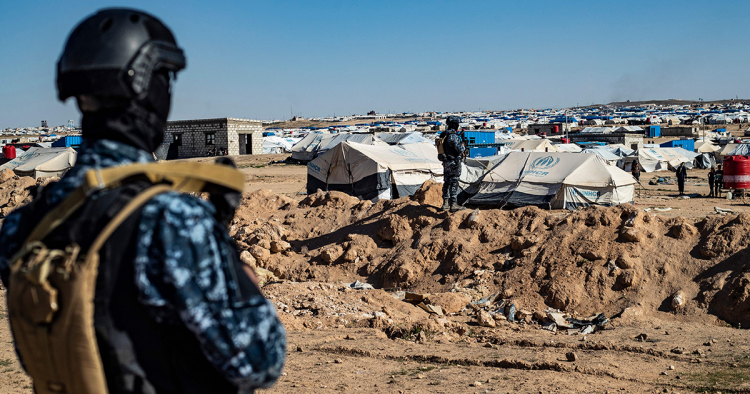 Over two years have passed since the liberation of Baghouz camp in Syria’s Deir ez-Zor Governorate, which was ISIS’s last stronghold in the country. The international coalition and its ally, the Autonomous Administration of North and East Syria (AANES), have been attempting to stabilize areas east of the Euphrates prevent ISIS from making a comeback. The group, however, is still active and carrying out security operations in the region, a trend that has increased dramatically over time, especially in the last two years.

The resurgence of ISIS in the areas under the AANES’s authority is not only due to the tactics that the group itself has employed since its collapse, such as shifting to guerrilla warfare and a “security states” strategy. It is also the result of the wrongheaded policies of the AANES, including the release of ISIS fighters, a failure to manage economic issues, and the failure of governance systems and the administration in dealing with tribal communities.

The release of ISIS fighters

During its war against ISIS from 2017 to 2019, the Syrian Democratic Forces (SDF), the military wing of the AANES, arrest thousands of ISIS members and their families. These prisoners were distributed among several detention centers, including al-Hasakah prison and Kobane Prison. Some others were placed in collective detention centers for instance, the al-Hol camp in the southeast of al-Hasakah Governorate and the Ain Issa camp in the northeast of the al-Raqqa Governorate.

The AANES’s approach to ISIS detainees was unsuccessful, as it aimed to release the organization’s fighters, especially local Syrians, on various pretexts related to tribal mediation, or, on some occasions, through an amnesty granted to them by the AANES itself. ecently, the AANES has released more ISIS fighters from prison due to the spread of COVID-19. The continuous release of ISIS fighters has not been accompanied by measures to rehabilitate the released detainees or reintegrate them into local communities, however. Moreover, there has been no attempt to address ISIS’s religious-ideological legacy and its impact on these fighters, and as a result they continue to hold extremist views and remain loyal to the group. This has created an environment conducive to them falling back into extremism and violence, driven by a desire for vengeance.

ISIS has recruited many of these prisoners into its units operating east of the Euphrates, which strengthened its ranks with experienced, competent fighters who could be useful both militarily and organizationally. This is particularly true for the younger generation of fighters, who have an ideological impulse to rejoin the group. Consequently, the frequency of attacks has increased and ISIS has been able to turn the region into an open battlefield lacking both security and stability.

As is the case elsewhere in Syria, the areas controlled by the AANES suffer from poor economic conditions, due to the Syrian pound’s low exchange rate against the U.S. dollar, high prices for food commodities, and the lack of sufficient job opportunities for the large number of local workers. The crisis has been exacerbated by the COVID-19 pandemic and declining investment rates, leading to a steady worsening of the security situation in those areas.

The AANES attributes the deteriorating economic situation to several factors, such as its inability to prevent the negative repercussions of the decline of the Syrian pound. Additionally, some crossings that connect these regions with neighboring areas under the control of the Syrian or Iraqi regimes have been closed, especially the Yarubiyah crossing, which connected the AANES areas to the Iraqi city of Rabia. The closure of that crossing had a negative impact, resulting in a rise in commodity prices.

The economy in the AANES areas, however, has not deteriorated merely due to poor economic conditions in Syria more broadly. Rather, the administration’s own policies played a role as well. First and foremost, the AANES squandered the region’s resources, especially oil and wheat, by selling them to the Syrian regime, and thus its areas suffered frequent fuel and bread shortages.

Second, the AANES overlooked the smuggling of basic foodstuffs, medical supplies, and livestock from the areas under its control to those controlled by the Syrian regime, driven by the difference in prices between the two regions. Smugglers are supported by prominent SDF leaders, especially in Raqqa and Deir ez-Zor, which are directly connected to the regime-held areas.

Moreover, the AANES allocates the lion’s share of the region’s resources and wealth to the military effort, dedicated to fighting ISIS, Turkey, and the pro-Turkey Syrian factions. This includes allocating substantial funding to support the Kurdistan Workers’ Party (PKK) and its cadres located in the Qandil Mountains. Had funds been invested locally in improving the economy in AANES-controlled areas in northern and eastern Syria instead, the economic situation might be better.

The poor economic conditions have prompted local communities to protest the AANES’s policies. Regions such as Deir ez-Zor, Raqqa, and some parts of Hasakah have seen continuous demonstrations and road blockages and are in need of greater resources and funding to support economic recovery.

ISIS saw an opportunity in the deteriorating economic situation and the resentment of the local population toward the AANES’s policies to ramp up its activities on two fronts. First, as a propaganda effort, ISIS has compared the current economic conditions with the period when it was in control of the area from 2014 until the fall of Baghouz in 2019, in order to sway local communities and create a favorable environment to recapture those territories. Second, ISIS has exploited the chaotic situation accompanying the protests in cities and towns by targeting the SDF and the AANES's civil administration offices, as well as those who interact with them, both civilians and military. ISIS has also exploited the poverty in local communities in such circumstances to push locals to join its ranks in exchange for financial incentives.

Tribes and systems of governance

After ISIS’s hold over northeast Syria weakened, the AANES tried to build trust with the tribes that make up the majority of local communities in the areas under its control, particularly the tribes of al-Akidat, al-Baggara, Shammar, Jabour, and al-Afadala. These tribes managed the geographical areas and natural resources within their zones of influence before the areas were taken over by ISIS.

The AANES attempted to win over the loyalty of tribal communities through governance and by allowing these tribes to participate in managing their own areas. This occurred through the formation of civil councils in Raqqa, Deir ez-Zor, and Hasakah, and the military councils affiliated with them. The leadership of these councils was conferred upon tribal figures, such as in case of the Deir ez-Zor military council, where it was given to Ahmed al-Khabil, from the Akidat tribe. Similarly, the al-Sanadid forces representing the Shammar tribe allied with the AANES were maintained as part of the SDF.

The AANES has faced many obstacles while attempting to gain the confidence of the tribes. Foremost among these is the fact that most of the influential tribal figures had fled ISIS and live outside the areas controlled by the AANES. These tribal figures consider the AANES and its current presence to be a temporary situation. They want to restore the ruling arrangements that existed before ISIS captured their areas. The second obstacle is that the loyalties of many prominent families in northeastern Syria have become divided between multiple parties, among them the AANES, the Syrian regime, and other Syrian opposition parties.

In attempting to overcome these obstacles, the AANES relied on tribal figures in the area, working with them to manage the region. Such attempts, however, soon failed for various reasons. One is that the AANES did not give the tribes actual administrative authority, but rather merely formal authority, while maintaining real power in the hands of figures and leaders with a Kurdish background. The second reason for the breakdown in relations between tribal communities and the AANES was the assassination of many tribal leaders, such as Sheikh Faisal al-Huwaidi in Raqqa and Sheikh Mutashar al-Hafil in Deir ez-Zor, which caused an eruption of tribal outrage. While some accused the AANES of conspiring to carry out those assassinations, others blame it for its inability to secure the region.

Relations between the local communities and the AANES have further broken down due to the failure of the civil councils, their rampant corruption, and their inability to provide for the economic and public service needs of local communities. This has resulted in continuous uprisings against these councils in the region, and, in turn, has helped ISIS to agitate public opinion against the AANES. Moreover, ISIS has also taken advantage of the chaos accompanying the protests and popular discontent against the administration’s performance to strengthen its cells and increase its activities, and as long as tensions between the local communities and the AANES remain, ISIS is likely to continue to expand.

Mohammed Hassan is a university student at the Faculty of Law, Department of International Law. His writings focus on the regions of northern and eastern Syria, especially extremist Islamic groups and tribal societies. He writes for a number of Arab newspapers, including the Lebanese newspaper al-Modon and Daraj website, and has written at Chatham House since 2016. You can follow him on Twitter @mohammed_nomad. The views expressed in this piece are his own.