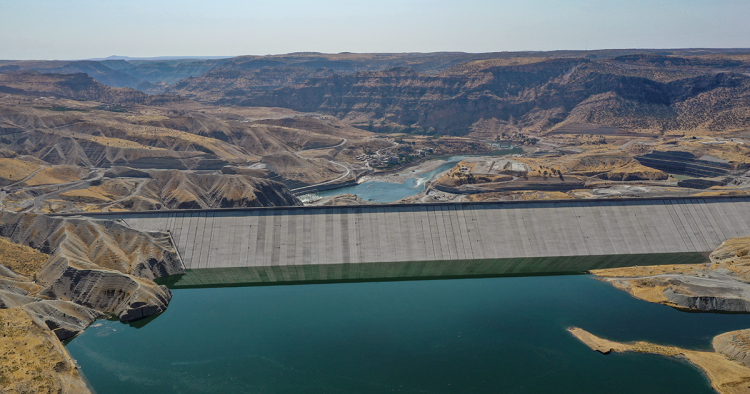 The Middle East and North Africa (MENA) region faces unique challenges to environmental sustainability and human habitation. First and foremost among these is the limited availability of freshwater. As a broad swath of arid to dry-subhumid mountainous desert, the region sees most of its precipitation fall as mountain snow. Surface water is relatively scarce and the major rivers are fed by snowmelt runoff in source areas far from major points of use. The headwaters of the Tigris and Euphrates rivers in mountainous eastern Turkey and the headwaters of the Blue Nile in the Ethiopian Highlands are prime examples. Sustained availability of water to these river systems is therefore dependent on the predictable transformation of mountain snowpack into runoff.

The relative hydrologic “health” of a system is often thought of in terms of the absolute amount of precipitation falling on the watershed. While the quantity of precipitation is important, precipitation alone does not guarantee runoff. The capacity of any basin to efficiently translate precipitation into runoff is dependent on a complex, sensitive interplay of forces that must align if it is to be predictable — and predictability is the foundation of sound planning.

Water stores energy more efficiently than air. The oceans, therefore, are a significant reservoir of heat produced by human activity. Not surprisingly, temperature anomalies in the ocean have skewed overwhelmingly higher since the 1990s. This is important because warming oceans have the potential to contribute more moisture to the atmosphere through increased evaporation. A warming air mass, however, buffers this effect with an increased capacity to retain moisture, meaning that more moisture is needed to reach saturation. This impacts both the amount and the timing of precipitation. In other words, when coupled with a warming ocean, a warmer atmosphere may take longer to reach saturation, but will deliver more precipitation when it does.

Studies suggest that wet regions will get wetter and arid regions will have even less precipitation. For regions already feeling the effects of increased average temperatures and aridification — such as the MENA region — longer, hotter summers and delayed onset of autumn cooling and precipitation may mean both a delay in snowpack formation and a diminished snowpack. This may be the result not only of insufficient moisture in the atmosphere needed to reach saturation, but may also be due to more winter precipitation falling in the form of rain rather than snow. The potential coupling of warmer oceans and a warmer atmosphere has significant and possibly dire implications for the expected lifespan of surface waters in MENA.

Some regions have more naturally favorable conditions than others for generating runoff. Areas with cooler, wetter fall weather at elevation have soils at (or close to) saturation prior to the snow accumulation season. This is important because the state of the “soil moisture budget” is often an influential factor in how much runoff is generated during melt. In this context, soil that is closer to saturation will have a reduced capacity to retain additional water. Thus, snow accumulating on saturated soil will be more likely to generate runoff with the onset of spring melt.

By contrast, a warmer atmosphere with longer, hotter summers will have a drier prelude to snow accumulation season. Warmer air wicks moisture from the soil surface and increases evaporative stress on regional vegetation, resulting in a soil moisture “deficit” in this crucial period. Since a greater percentage of meltwater first must be absorbed into the soil, less runoff will be generated.

The sun also plays a significant role in this process. Snowpack development is sensitive to the daily inbound/outbound fluctuation of solar radiation in the atmosphere. Snow reflects most incoming solar radiation. Snow that has accumulated on saturated soil after a wet autumn reflects most efficiently. Snow that has accumulated after a long, hot summer and dry autumn, however, may continue to accumulate dust on the surface of the snowpack, which absorbs solar radiation, increases the temperature at the snowpack surface, and tends to result in a premature melt.

MENA governments have poured money into developing large-scale hydropower and water projects. Perhaps the most notable of these are Turkey’s Southeastern Anatolia Project (GAP), a series of 22 dams, 19 hydroelectric facilities, and agricultural diversions in the headwaters of the Tigris and Euphrates, and more recently the Grand Ethiopian Renaissance Dam (GERD) on the Blue Nile in Ethiopia. Both mega-projects were designed to stimulate economic growth and ensure greater independence. The benefits of these projects may be overestimated, however, if both the quantity and quality of runoff proves increasingly disappointing.

Seasonal precipitation totals are important, but even the wettest of years will have reduced runoff if the timing of delivery is off, the autumn was warm and dry, and an already meager snowpack melts earlier than expected. In such years, a greater soil moisture deficit must be overcome before the watershed can generate any runoff in spring.

Reduced streamflow can also have adverse impacts on water quality. Reduced runoff means less fresh water available to dilute naturally-occurring salts eroded from upstream areas, resulting in higher salinity in both surface waters and agricultural soils. Hotter, drier conditions over a greater percentage of the year mean less irrigation water available to flush salts that accumulate from the soil. Increased soil and surface water salinity constitutes an existential threat to agriculture as well as an economic liability (in terms of damage to piping, drains, and other infrastructure).

These impacts can be mitigated with careful planning that takes this delicate balance of factors into account, such as coordinated facility management to minimize adverse impacts to all users or funding agreements designed to address the damage caused by excess salinity. Greater cross-border collaboration among MENA countries is essential if stakeholders hope to maximize the delivery potential of the water resources projects in which they have already invested so heavily.

Orestes Morfín is a senior planning analyst with the Central Arizona Water Conservation District and a non-resident scholar with MEI’s Climate and Water Program. The views expressed in this piece are his own.