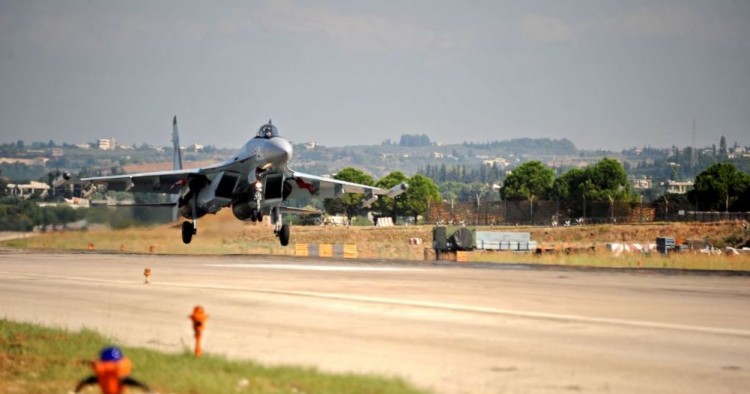 The satellite images published on May 26 by U.S. African Command (AFRICOM) appear to confirm reports that Russian MiG-29 jet fighters had flown to Libya. At least one of the aircraft, never before deployed to the country, was spotted at the al-Jufra air base. It may well be that, as some reports suggest, the aircraft were acquired from Belarus and operated by Belarussian and Serbian pilots, not Russians. Having said that, however, Russia can no longer deny it knows about the deployment of military equipment to Libya and argue, as it did, that the hardware was procured through dummy firms in Serbia without Moscow’s knowledge. In fact, the MiG-29s travelled to Libya via Russia's Hemeimeem air base in Syria, by way of Iran’s Hamadan air base and Russia’s Privolzhsky airfield, and were accompanied by a Tu-154M military aircraft. As this latest episode makes clear, Hemeimeem air base plays a central role in Russia’s growing involvement in both the Mediterranean and Africa.

Russia’s presence in the Mediterranean

Prior to 1991, the Fifth Operational Squadron was the Soviet Navy’s permanent operation force in the Mediterranean theater and served as a counterweight to the United States Sixth Fleet. Unlike the Americans, however, the Soviets never established a permanent naval base in the Mediterranean. Instead, they relied on facilities in Syria, Algeria, and Yugoslavia to repair and resupply their vessels and rest their crews. Following the collapse of the USSR, the Russian naval facility in Tartus became the country’s only support point for long-range trips to the Atlantic and Indian oceans. At the time, the Russian government, faced with chronic economic problems, struggled to commit substantial resources to projecting power abroad, including in the Mediterranean. Thus, in 2012 the Tartus facility consisted of just a pier and two small buildings on the coast, and the apparatus of Russia’s chief military adviser in Syria, for all practical purposes, was disbanded. In 2013 Russia even had to evacuate its officers from Syria, fearing the risks posed by the ongoing civil war.

The situation changed dramatically in 2015 when Russia decided to actively intervene in the Syrian conflict. The Russian military began to refer to the Tartus facility as a military base, equipped with own repair shop and able to accommodate 11 warships, including nuclear-powered ones. The Russia-controlled Hemeimeem air base has also been modernized and expanded since the start of Moscow’s campaign. Thanks to the construction of a second landing strip, it can now service more types of planes, including heavy aircraft such as the Tu-142M3 and missile carriers. Prior to this Russian strategic bombers like the Tu-95MS and Tu-160 had to carry out cruise missile strikes against Syrian rebel forces and ISIS fighters from Russia’s Mozdok and Olenya air bases, refueling in mid-air. The Russian military has also eyed the Kuweires air base in Aleppo as a location to deploy MiG-31 interceptor aircraft, which would be able to reach Malta and Gibraltar within an hour and fire long-range missiles.

This level of Russian presence is adequate to the tasks Moscow has set for itself in Syria, namely waving the Russian flag in the Mediterranean and showcasing the county’s return to the Middle East and North Africa. Beyond those symbolic aims, however, Russia’s real capabilities in the region, although significantly greater than they were a decade ago, are not as vast as they might appear on first glance. Even if Moscow wanted to deploy thousands of troops in Syria on short notice, it would struggle to do so for technical reasons. Russia lacks ships capable of operating in long-distance maritime and oceanic zones and only has a modest array of military transport aircraft, two factors that limit Moscow’s ability to conduct large-scale operations in a distant theater. Whatever Russia lacks in pure military power, however, it aspires to make up for with the appeal of its ideas by promoting its vision for an alternative, multipolar geopolitical order. Under this order, Moscow would serve as one of several poles, while regional players in Africa and the Middle East would have greater leverage in negotiations with larger powers, especially the West.

Africa has taken on a growing importance for Russia since the outbreak of the Ukraine crisis, which further accentuated Moscow’s aspirations to become a global power, as opposed to an isolated, besieged fortress. To this end, Russia made a fresh bid to diversify its diplomatic and economic relations to make sure it could face the West on equal terms, circumvent sanctions, and solicit support from Middle Eastern and African countries in multilateral institutions such as the UN.

To build ties with African states, Russia has been engaged in diplomacy on two tracks. The utility of official diplomatic channels is limited by the cumbersome nature of Russian bureaucracy, which often lacks the initiative to take on responsibility and risks. Therefore, Moscow has sought to cultivate relations with local African players using quasi-governmental actors such as businessmen and private military companies. This informal diplomacy is carried out under the guise of Russia’s official advisers and is apparently overseen by its special services. The Hemeimeem air base in Syria serves as a logistical hub servicing flights to Libya, Central African Republic (CAR), and Sudan, where Russian non-government players are reportedly operating.

Russia’s reliance on this system of “parallel diplomacy” provides flexibility but also has its drawbacks in an unstable political setting. Russia has often lacked a strong military presence on the ground to protect friendly African regimes from coups or domestic upheaval. Thus, while this parallel diplomacy strategy could help to obscure Russia’s dealings in Africa and shield its reputation, it is by no means foolproof.

The ousting of the former Sudanese leader Omar al-Bashir in 2019 is a case in point. Before he was deposed by a coup d’etat after months of popular protests, al-Bashir had been building ties with Moscow. In 2017 the Russian private military firm Wagner Group reportedly opened a camp in Sudan to train local army recruits and soldiers to serve in the Central African army. Sudan also became an object of commercial interest for Russian businessman Yevgeny Prigozhin, the reputed owner of the Wagner Group. A Russian mining company linked to Prigozhin, M Invest, was reported to have gained access to Sudan’s goldmines and dispatched more than 50 experts to the country. Moscow also used its relationship with al-Bashir to lend additional support to Syrian President Bashar al-Assad. While most of the contacts between Moscow and Khartoum went through unofficial channels, it was a Hemeimeem-based aircraft that reportedly carried the Sudanese leader to Syria in 2018 in an attempt to boost Assad’s diplomatic profile and mend his ties with the League of Arab States.

With al-Bashir ousted, however, the once burgeoning Russia-Sudan alliance is now under strain. The country’s caretaker leader and the chief of Transitional Military Council (TMC), Lt. Gen. Abdel Fattah Abdelrahman Burhan, was quick to begin efforts to improve ties with the West, a move that may come at the expense of its partnership with Moscow in the military sphere.

Russia’s pivot to Africa has yielded more lasting results with governments that have a firmer grip on power. One example is the regime of Central African President Faustin-Archange Touadera, who has managed to stay in power despite the continuing UN arms embargo and the loss of French support. The Russian government exploited the opening left by the withdrawal of French forces by sending ammunition and military and civilian advisers to CAR. In so doing it also provided a convenient cover for the presence of private contractors in the African country, something Russia has consistently denied — even after three Russian journalists were murdered there while making a documentary about paramilitary groups. In addition to using sea routes to reach African countries, Russia has also transported supplies and personnel to CAR via Sudan using the Hemeimeem air base.

One important piece in Russia’s African puzzle has been the Kremlin’s growing partnership with Egyptian President Abdel-Fattah el-Sisi. This helped Moscow solidify its position within the network of regional alliances and, to an extent, use the Libya portfolio as leverage in its discussions with Turkey on Syria. It was hardly by accident that Moscow’s consultations on Libya came on the same day that the head of the Syrian regime’s National Security Bureau, Ali Mamlouk, held talks with Turkish intelligence chief Hakan Fidan.

Hemeimeem has also been instrumental in servicing Russian air traffic to Benghazi and al-Watiya air base in Libya. The latter had been used by Moscow to fly aircraft to Venezuela before Khalifa Hifter’s forces lost control of the base. Meanwhile, it is still difficult to ascertain the degree of Russian involvement in recruiting Syrians to fight on Hifter’s side. However, recent reports at the very least support the thesis that Hemeimeem is used as an assembly point from which Syrian recruits are transported to Libya. And even if this assistance is part of a bilateral arrangement between Assad and Hifter, Russia must have acted as a broker — especially given reports that the fighters transported to Libya included not just pro-regime militiamen from the National Defense Forces, but also ISIS prisoners.

Russia has once again displayed its pragmatism in using its facilities in Syria and links to private military groups for geopolitical maneuvering at little financial cost. The deployment to Libya has also showcased Moscow’s role not so much as a direct participant in the country’s conflict as a facilitator of a burgeoning alliance between Assad and Hifter.

Anton Mardasov is a non-resident scholar in MEI's Syria Program and a non-resident military affairs expert at the Russian International Affairs Council (RIAC) focusing on Syria, Iraq, and extremist organizations. The views expressed in this piece are his own.