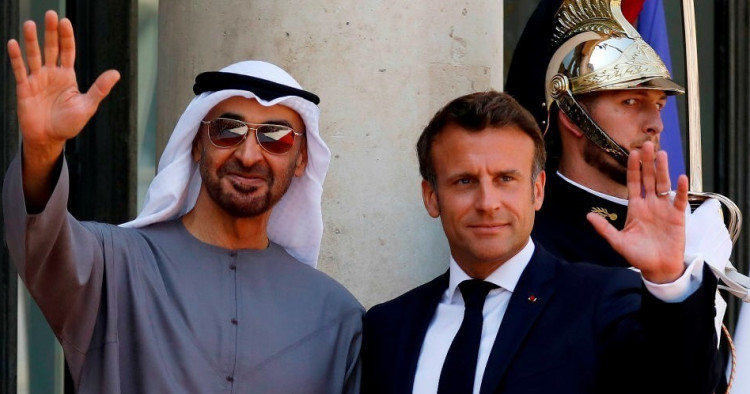 The Russian invasion and the Middle East

The impact of Russia’s 2022 invasion of Ukraine has reverberated around the world, and the Middle East is no exception. Regional leaders, who heretofore generally managed to maintain good relations with both Washington and Moscow, are now being pressured to pick a side. Most Gulf countries publicly condemned the Russian full-scale attack on Ukraine, but they have specifically refrained from taking any punitive measures against Moscow.

Almost immediately after Russian forces crossed into Ukrainian-controlled territory, global energy markets responded with dramatic surges in prices. Thus, two key issues emerged beyond those associated with the politics of the situation: how the world could overcome the challenges to its energy supply needs, and, despite these challenges, how it could achieve a greener and more sustainable future. Indeed, the notion that the world’s dependency on fossil fuels indirectly emboldened Russia’s aggression against Ukraine was swiftly endorsed and promoted by organizations like Greenpeace, Extinction Rebellion, and Fridays for Future (among many others).

As Europe and the United States began imposing ever tighter economic sanctions on Moscow for its aggression, European countries anxiously sought to secure energy supplies from the Middle East to replace their imports from Russia. Europe especially looked to the oil- and natural gas-rich Gulf Cooperation Council (GCC) states to make up for the continent’s growing energy shortfalls. But with energy security becoming a top priority, the sudden need to find new sources of hydrocarbons dampened Europe’s previously pledged resolve to address climate change and greenhouse gas emissions.

The optics of this have been troublesome, giving the impression that when an energy crisis affects the European Union or the United States, their governments will readily justify the need to use more fossil fuels, but when a hydrocarbon-rich Middle Eastern countries make the same argument, the Western powers promptly portray them as obstacles to global energy diversification. Interestingly, several senior EU officials flew to Doha, Qatar, during the early days of the 2022 Russo-Ukrainian war with a clear message: the EU needs your gas as soon as possible. The trip exemplified the Western powers’ double standards: rhetorically promoting global efforts to reduce dependence on fossil fuels while extending their own reliance on oil and gas for domestic economic benefit as well as derailing the Middle Eastern countries’ diversification plans; blaming the surge in energy prices on the Gulf oil producers while ignoring the crucial role they play in stabilizing global energy supply.

An oil market analysis report published in March by the Oxford Institute for Energy Studies ranks Russia as the second-largest producer of crude oil in the world, pumping around 14% of total global output in 2021. Before the war, about 60% of Russian crude exports went to Europe, with another 35% heading to Asia. One of the greatest challenges to much of the European continent caused by Russia’s 2022 invasion of Ukraine was how it demonstrated the fragility of EU countries with respect to their energy security. The associated uncertainty looms on many fronts. And yet recent debate in Europe has turned to how surging energy prices are derailing diversification reforms in the oil-exporting Middle East without taking into account the Europeans’ role in this equation as well as how the war is making some rich hydrocarbon producers even richer. In truth, the current crisis has revealed the degree to which the European countries’ own energy transition plans have come to a standstill and are no longer in line with the new EU “green deal” or the 2015 Paris Agreement on climate change. The major question for the West in the coming months and years, therefore, should not be on whose “side” the Middle Eastern countries fall when it comes to standing up to Russia’s use of energy as a weapon but instead what steps the Western states themselves can take to reduce their fossil fuel demand.

The current energy and economic crisis, sharply exacerbated by the Russian invasion of Ukraine, has seen global oil prices rise to new highs. Before the war, most European countries could generally count on a stable flow of Russian gas, which made up 40% of the EU’s total imports in 2021. But Russia’s unprovoked aggression against its southwestern neighbor has made this relationship increasingly untenable for the European bloc, and the EU and many of its individual members are now scrambling to find other suppliers. Furthermore, in response to the eye-popping energy bills across Europe partially caused by the scaling back of Russian gas on EU markets, governments are slashing fuel taxes and subsidizing energy costs — a course of action that is precisely the opposite of what is necessary to encourage local conservation and a shift to alternative sources of energy. At the same time, these policies deprive governments of revenues that could be used to financially mitigate the economic impact, particularly for low-income households.

The EU’s greenhouse gas emissions during the last quarter of 2021 were higher than in any quarter since late 2018, negating any emission-reduction gains achieved during the early part of the COVID-19 pandemic. Data issued by Eurostat showed that the EU released 1,041 million tons of CO2-equivalent pollution in the October-December period of 2021. That is an 8% jump from the same quarter in 2020 and slightly higher than the fourth quarter of 2019, the last period that was unaffected by the pandemic-induced economic slump. Even before the ongoing Russo-Ukrainian war, EU countries were far behind their climate commitment and leadership goals. The invasion exposed how the imperative of meeting immediate energy needs limited the international community’s leverage to pressure Russian President Vladimir Putin into ending hostilities. As German Chancellor Olaf Scholz put it, an embargo on Russian oil “would mean plunging our country and the whole of Europe into a recession.” Indeed, the crisis undoubtedly revealed how the EU had failed to reduce its dependence on fossil fuels, thus keeping the world vulnerable to geopolitical blackmail and global warming. The young Swedish activist Greta Thunberg rebuked European leaders: “Yet, the EU still somehow identifies itself as a ‘climate leader’.”

The way forward for energy security

One of the main reasons for the current oil crisis is the years of underinvestment in the clean energy sector and non-fossil fuel energy alternatives across the European bloc. Illustratively, despite long-running pledges to move to entirely renewable sources of energy before the middle of the century, Germany is today one of the most dependent EU countries on Russian oil and gas; and under the leadership of former Chancellor Angela Merkel, Germany exacerbated that trend by deciding to phase out nuclear power. This has severely undermined Germany’s ability to cut itself off from all imports of Russian fossil fuels. Yet from a broader and longer-term perspective, what is needed is not a ban on Russian oil or gas per se but rather for the EU and other rich countries of the Global North to drastically reduce their fossil fuel use and act collectively to mitigate the catastrophic climate effects already occurring.

Meanwhile, Europe’s energy disruptions are having worldwide consequences and continue to underscore that the energy transition is neither easy nor possible to impulsively rush. Consequently, sufficient hydrocarbon resources and investments will still have to be made available to satisfy global energy needs while countries progress toward transitioning to carbon-neutral power generation. The current high energy prices are slowing the post-pandemic economic recovery while endangering the political success of the clean-energy transition that the world requires. This risks, either by distraction or destabilization, undercutting the necessary urgency for global climate action and realizing a net-zero emission world.

What is needed in this instance is not to place blame on Middle Eastern countries but rather to push the oil and gas industry to get on board with accelerating the clean energy transition — and in doing so, to acknowledge that the reliance on such fuels over the medium and long term poses hazards to the environment, economy, and national security of every country. Only then will the adoption of clean energy technologies become properly aligned with the new security imperatives made evident by the war in Ukraine.

Neeshad Shafi is an environmentalist and policy-oriented climate change advocate, as well as a non-resident scholar with MEI’s Climate and Water Program.