HTS and al-Qaeda in Syria: Reconciling the irreconcilable 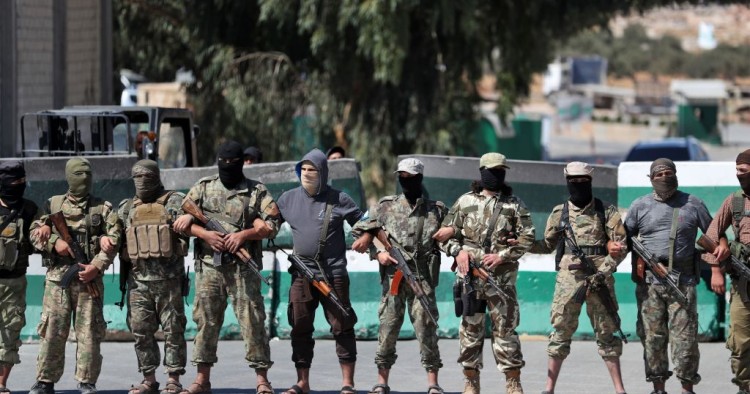 On June 14, the U.S.-led international coalition targeted the car of Abu al-Qassam al-Urdini, a senior leader of al-Qaeda (AQ) affiliate Hurras al-Din (HAD), and his fellow jihadi Bilal al-San’ani on the outskirts of Idlib. Two days later, Hayat Tahrir al-Sham (HTS), Idlib’s dominant jihadi group, arrested a former senior commander, Abu Salah al-Uzbeki, who had defected from HTS to join Ansar al-Din.[1] A week later, HTS also arrested a former member of its Shura council, Abu Malik al-Tali, who had formed a new faction called Liwa al-Muqatileen al-Ansar without announcing his defection from HTS.[2] The common denominator between these four men is their affiliation with the newly established operations room, “So Be Steadfast” (SBS), which is an extension of the “Incite the Believers” operations room of HAD and the like-minded groups Ansar al-Din and Ansar al-Islam, along with two other groups: Liwa al-Muqatileen al-Ansar and Tansiqyet al-Jihad.[3] Disaffected with HTS leader Abu Muhammad al-Jolani’s realpolitik, these SBS factions are HTS’s most threatening rivals.

HTS launched multiple raids on SBS, forcing its factions to close their military bases and banning the formation of any new factions or operations rooms.[4] In doing so, HTS has killed two birds with one stone: demarcating new redlines for its rivals and demonstrating its usefulness to its Turkish “partner” and the international community in their war on terrorism. Nevertheless, SBS, which is spearheaded by HAD and blessed by AQ’s central command, is unlikely to reconcile with HTS, nor will it accept giving up the fight.

HTS’s aggressive behavior against other armed groups is not new. In January 2019, for example, the group launched multiple attacks against the Turkish-backed “National Front for Liberation,” driving its forces out of western Aleppo and the Hama countryside.[5] What is different about the recent offensive, however, is the nature of the rival. Following previous HTS offensives, the defeated factions have dissolved themselves — such as Ahrar al-Sham and Nour al-Din al-Zinki — and, under Turkish pressure, have joined the HTS-dominated operations room “The Clear Conquest.” While efforts to divide SBS have already begun, its factions are unlikely to fight under the HTS banner. A source from SBS told the author: “HTS is now pressuring the factions of SBS to join its room ‘The Clear Conquest.’ None of them have agreed and I do not think they will.” Other than Ansar al-Islam, SBS was mainly established by HTS defectors and their disagreements with HTS seem irreconcilable.

HAD, for example, was formed by former HTS hardliners who rejected its ideological divorce from AQ and its shift from global jihadism to a local focus. Abu al-Abed Asheda’ of Tansiqyet al-Jihad was detained for six months by HTS for publicly revealing its internal corruption,[6] while Abu Malik al-Tali of Liwa al-Muqatileen al-Ansar resigned from HTS for “not knowing some of the group’s policies or not being convinced of them.”[7] It is also possible that al-Jolani sees the wealthy al-Tali as a potential threat, given his reputation for piety, his direct participation in military activities, and the block of fighters he controls. Although Asheda’ was released and al-Tali withdrew his resignation before being arrested, their growing enmity with al-Jolani cannot be overstated. This explains why both men formed their own groups and joined with the hardline factions of “Incite the Believers” in establishing SBS, to protect themselves from HTS’s iron grip and unite in their shared opposition to Turkish-Russian agreements over Idlib.

This brings us to another point of common ground for the factions of SBS, which is the rejection of the joint Russian-Turkish patrols over the M4 highway. It is no secret that were it not for HTS’s help, it would have been difficult to secure the M4 highway and implement the March 5 Russian-Turkish cease-fire. Jihadi-Salafi groups, moreover, consider any secular institution such as the Turkish army as “infidel” and “apostate,” meaning that cooperating with them is undesirable and only permissible in situations of great necessity.[8] HTS has developed an interrelationship with Turkey where both sides have cooperated on different issues. In January 2019, for example, in return for Turkey’s silence regarding the HTS offensive against the National Front of Liberation supported by Turkey, al-Jolani expressed his support for the potential Turkish operation in northeast Syria to uproot the Kurdistan Workers’ Party (PKK).

Factions inside SBS believe that HTS is not only cooperating with Ankara but also helping it fulfil its commitments under the Sochi and Astana agreements in eliminating radical groups from Idlib. “All this pressure on SBS today is to prevent it from having a say in the conflict,” the author’s source noted.

One thing that is clear from history is that while AQ may accept a truce for strategic reasons, its ideology will not allow it to surrender. SBS, which is dominated by radical groups, was forced to close its military bases in different areas of the Idlib countryside (Arab al-Sa’id, Sarmada, Armnaz, Harem, and Jisr al-Shughur). Nonetheless, as senior HAD leader Abu Abd al-Rahman al-Makki put it in his recent statement on the fighting between HTS and SBS, “Our jihad has not come to fruition.”[9] He also reminded HAD fighters that they are “the sect of believers,” conjuring up AQ’s self-narrative that it is the vanguard that never deviates from the right path. AQ, furthermore, adopts what is known by jihadis as qital al-nikkaya, a modus operandi aimed at inflicting harm on the enemy without gaining territory. In other words, depriving SBS and its hardline groups of their military bases will not necessarily result in their dissolution or force them to join HTS’s operations room.

Before the recent fighting, HTS had periodically tightened its grip on HAD as a gesture of goodwill to Ankara and the international community. With the formation of SBS and the risk it poses to HTS, however, more serious measures had to be taken. The recent, unprecedented escalation by HTS might seem to be a harbinger of more aggressive actions against SBS. Nevertheless, a full-fledged confrontation would be costly for both sides and, therefore, it is in no-one’s interest. Should it happen, the SBS factions would have to fight for survival and could target the Turkish army as the closest enemy after the Russians. HTS would face a difficult battle, risking its cohesiveness as some within its ranks might abstain from fighting, and threatening to destabilize the already shaky state of security in northwest Syria.

Instead, what is likely to happen is an increase in economic pressure on SBS to stifle access to its already limited resources. Indeed, HTS has already begun a gradual clamp-down, citing its frequent justification of theft or banditry. As Fadi Hussein, a researcher on jihadi groups, told the author: “Soon, the HTS security office will arrest HAD members one by one” and “the affiliation with HAD in Idlib will be no different from being affiliated with IS.”

And in the meantime, senior AQ leaders continue to be killed. Abu al-Qassam al-Urdini was not the first member of AQ’s top echelons to be eliminated in a drone strike in Syria by the international coalition — it happened to both Abu Khadija al-Urduni and Abu Ahmad al-Raqawi as well — and he is unlikely to be the last.[10] While the source of the information behind these coalition strikes remains unclear, al-Jolani is seeking to ensure HTS’s seat at the table in a future Syria at all costs, suggesting he may well be willing to sacrifice the comrades of yesterday to atone for his group’s radical past.

In al-Jolani’s attempts to neutralize the presence of AQ in northwest Syria, his goals are aligned with those of the international coalition; indeed, Ambassador James Jeffrey, the U.S. special representative for Syria engagement, has highlighted that HTS claims to be “patriotic opposition fighters” and noted that they have not generated “international threats for some time,”[11] suggesting a softening of the U.S. line against the group. Even without open conflict, pressure from both the international coalition and HTS means that AQ-affiliated groups in northwest Syria face an uncertain future.

Orwa Ajjoub is an affiliated researcher at the Center for Middle Eastern Studies in Lund University. Orwa’s focus includes the ideological aspect of jihadi-Salafi groups and the internal dynamics of jihadi groups in Syria. The views expressed in this piece are his own.