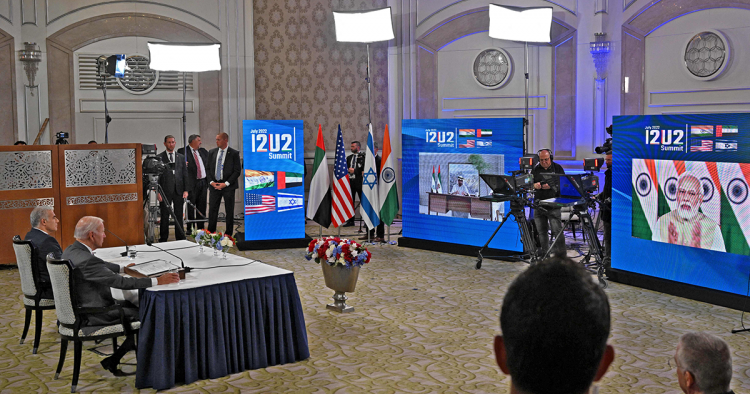 On July 14, President Joe Biden convened the first leaders’ summit between the United States, Israel, the United Arab Emirates, and India, now officially dubbed the “I2U2.” While the summit focused mainly on economic issues like food security and clean energy investment, this new diplomatic framework marks the beginning of a strategic shift that could formalize a West Asian security architecture stretching from the Suez Canal to the Straits of Malacca.

The Biden administration adopted this new geostrategic concept when Secretary of State Antony Blinken convened a meeting with his Indian, Israeli, and Emirati counterparts last October, inaugurating the I2U2 grouping. A year ago, in an essay for the Middle East Institute, I developed the concept of a broader Indo-Abrahamic strategic alignment between India, Israel, the UAE, and the United States in a common framework that creates a balance of power in West Asia. Adopting West Asia as a geographic concept reflects changing geopolitical realities, including the Taliban takeover of Afghanistan and the Russian invasion of Ukraine, codifying existing strategic lines. Regional peace and stability in West Asia cannot be guaranteed solely by the unilateral military presence of the United States, but instead requires a balance of power that will moderate the ambitions of rising states in the region, namely Iran and Turkey, as well as those of great powers threatening to fill a “vacuum,” as President Biden told Arab leaders.

Simply put, the Indo-Abrahamic framework is the strategic concept, and the I2U2 is the mechanism. The I2U2 summit took place in Israel before Biden's trip to Jeddah for a meeting with the leaders of Saudi Arabia, the UAE, Qatar, Kuwait, Oman, Bahrain, Egypt, Jordan, and Iraq: the “GCC+3.” The proximity in timing between the Jeddah and I2U2 summits opens new possibilities for the I2U2 grouping — the inclusion of Egypt, then Saudi Arabia, and later most of the GCC+3.

Part of the reason why the I2U2 summit was largely focused on economic issues is due to the capabilities and limitations of the member states. India does not yet have the ability to project defensive power in the Gulf as it faces rivals on two land fronts: Pakistan and China. Israeli-UAE security cooperation is nascent but remains limited by their small geographic size. The United States has vast capabilities but is limited by its other global security commitments, including the war in Ukraine and the strategic pivot to Asia.

To their credit, the I2U2 leaders already understand the limits of the format’s security capabilities. In a joint statement, the leaders referenced the Negev Forum, a regional security framework that includes the Abraham Accord states (Israel, Morocco, the UAE, and Bahrain) and Egypt. The I2U2’s support for the Negev Forum is an indication that there is a latent security architecture built into the I2U2 grouping.

Cairo and Riyadh can add muscle

Egypt and Saudi Arabia are the two states in West Asia that have both the diplomatic heft and military capacity to transform the I2U2 from a geoeconomic grouping into a true regional security architecture. Egypt is the only Arab state that has strong institutional and historical relations with each state in the I2U2. Cairo was the first Arab capital to normalize relations with Israel in 1979, is a major non-NATO ally to the United States, has strong historical relations with the UAE, and has maintained extraordinary bilateral relations with India since the nonalignment movement partnership between President Gamal Abdel Nasser and Prime Minister Jawaharlal Nehru. Adding Egypt into the I2U2 grouping — by virtue of its demography, geography, civilizational outlook, military power, and geopolitical aspirations — is a logical and strategic next step.

Egypt provides substantial military capabilities and power projection in the broader Middle East. Cairo has the second-largest Arab military in terms of manpower, is the third-largest arms importer in the world, and invests heavily in building its own domestic military production capabilities. Its air force has a diversified, growing portfolio of air assets that include Russian MiG-29 and possibly Sukhoi 35 fighters, alongside F-16s and potentially F-15s, French Rafales, and Italian Typhoons. Indian Tejas could join the fleet soon too. Egypt’s strategy of operating diversified military assets is not limited to its air force; the Egyptian navy is also revamping its assets and power projection capabilities. Egypt’s effective operation of aviation-capable platforms such as Mistral-class helicopter carriers makes it a naval middle power alongside Japan with its Izumo-class multipurpose destroyer and South Korea with its Dokdo-class amphibious assault ship. By acquiring two French-built Mistrals, continuously building up its submarine capabilities, and gradually expanding its local naval industrial base, the Egyptian navy has become a fighting force capable of maritime power projection in both the Red Sea and the Mediterranean Sea. Against this backdrop, in 2017, Cairo separated its navy into two fleets. The northern fleet focuses on the Mediterranean Sea and aims to deter Turkey from altering the Cairo-centered gas architecture that includes France, Israel, Greece, and Cyprus. The southern fleet aims to secure the flow of international trade from Asia and Africa to Europe through the Suez Canal. Egypt’s substantial naval capabilities position it as a principal member of the new naval task force that President Biden announced at the GCC+3 Jeddah Summit.

Saudi Arabia is the second fundamental pillar of this envisioned Indo-Abrahamic framework and the subsequent I2U2 mechanism. As a G20 economy, energy superpower, and spiritual leader among Muslim and Arab nations, the kingdom wields enormous political and economic influence both regionally and globally. Riyadh’s ongoing economic transformation and emergence as a rising military power in the Gulf are reshaping regional geopolitics. The kingdom is benefiting from increasing government spending on military acquisition from the United States, while also diversifying its military procurement beyond the U.S. and building its own domestic military industrial base. Under Crown Prince Mohammed bin Salman’s Vision 2030, Riyadh plans to spend half its military budget within the kingdom by 2030. Given its immense wealth and aspirations to be at the center of regional security and geopolitics to build up its credentials as a resilient global middle power, Saudi Arabia would likely back the establishment of a regional ﻿Terminal High Altitude Area Defense (THAAD) air defense system.

The inclusion of Saudi Arabia into the I2U2 framework is dependent on continuing normalization with Israel. Engagement between Saudi Arabia and Israel will likely continue to increase and take on a more institutional and legal shape following the transfer of the strategically significant Tiran and Sanafir islands from Egyptian to Saudi sovereignty, with Israeli approval. Riyadh’s move to open its airspace to all commercial flights, including Israeli ones, is a clear sign that normalization is proceeding, albeit at a slower pace than many analysts predicted.

The I2U2+2 — India, Israel, the UAE, the U.S., Egypt, and Saudi Arabia — has the potential to coordinate on global and regional security issues and to cooperate in other strategic theaters such as the Mediterranean Sea, the Red Sea, the Horn of Africa, the Arabian Sea, and the Indian Ocean. Together, these six countries have the diplomatic heft and military muscle to transform the I2U2 mechanism into an effective security architecture that will lessen — not increase — the need for a forward U.S. military presence in West Asia.