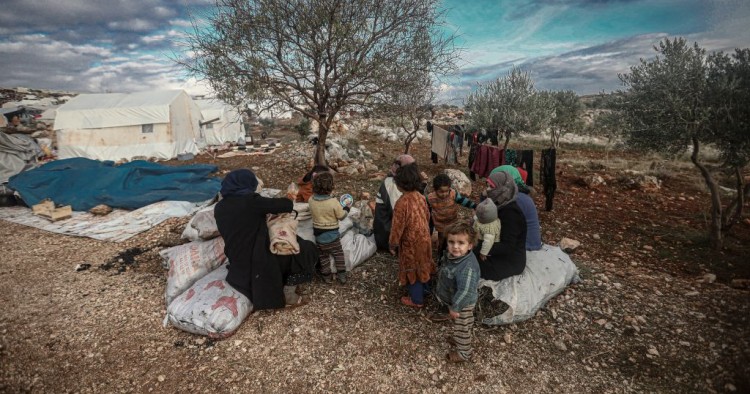 More than 300,000 civilians have been displaced in the last four weeks, since the Syrian regime and Russia resumed their brutal offensive on Idlib. Earlier in 2019, a five-month offensive saw hundreds of thousands displaced and more than 1,000 civilians killed. As many as 3.5 million civilians currently live in the Idlib region, an expanse of territory that represents roughly 3 percent of Syria. According to current population estimates, that means 20 percent of Syria’s 17 million in-country are squeezed into a tiny pocket of territory. They are easy targets for Syrian and Russian planes, which have developed an art of singling out civilian communities and their infrastructure, whether schools, hospitals, or markets.

All the while, the world sits in almost total silence, seemingly indifferent to developments on another front in Syria’s nearly 10-year-old war. Yet the consequences of what happens in Idlib could come to define the future of Syria — a country already destined for many more years of instability and suffering. On the one hand, the Syrian regime and its Russian partners are carrying out their most brutal, most criminal campaign of the war and the world’s silence can only be interpreted in Damascus and Moscow as de facto support. Considering the enormity of the humanitarian stakes at play, that is a travesty. Unlike all previous regime operations, the communities in Idlib have no escape route. Moreover, as many have shown over the years, much of northwestern Syria’s people have consistently opposed the domineering presence of extremists — and they continue to today. By doing nothing, we risk pushing some into the arms of our terrorist enemies.

In fact, our collective decision in the West and East to stop supporting anti-Assad movements in Syria in 2016 and 2017 has played a direct role in paving the way for the Syrian regime’s succession of military victories in recent years. Today, what was once termed the moderate or mainstream opposition has shrunk into strategic irrelevance. Many of our former partners have now abandoned the fight altogether and sought asylum in Turkey, Jordan, or Europe. Some have submitted themselves to Turkey, selling their revolutionary credentials for a salary and a job as a mercenary, whether in northern Syria or Libya. A small number of others remain engaged in the fight in Idlib, but their ability to exert themselves is now limited, overwhelmed long ago by extremist groups linked to al-Qaeda.

As I’ve written before, Bashar al-Assad has not won the war in Syria — he has merely survived it. The geographical country, state, and nation that he now controls is shattered, divided, destroyed, and broken. There is no prospect of meaningful reconstruction and Russian attempts to instill “reconciliation” are failing. ISIS and al-Qaeda remain deeply embedded, as do Hezbollah and an array of Iranian-controlled militias. Corruption is more widespread than ever before and the economy is wrecked. Using its veto at the United Nations, Russia meanwhile appears determined to end all cross-border humanitarian assistance into Syria, forcing the international community to channel all aid through the regime in Damascus. Therefore, millions of Syrians living outside regime-controlled areas look set to go without aid in 2020.

Within this miserable environment, the anti-Assad revolution remains undefeated, but it has changed. The erosion of the mainstream opposition into near-irrelevance inside Syria provides extraordinary opportunities to extremists, including ISIS and al-Qaeda. However, the greatest potential beneficiary is Hayat Tahrir al-Sham (HTS), the former al-Qaeda affiliate now dominating much of Idlib. Though disliked or distrusted by many within Syria’s revolutionary circles, it is HTS that remains best placed to inherit the revolution in Syria, whether Idlib survives or not. While ISIS and al-Qaeda’s affiliate, Tanzim Huras al-Din, maintain a clear and public global agenda, HTS remains solely focused on the Syrian theater.

In a speech released on Dec. 24, HTS leader Abu Mohammed al-Jolani presented HTS’s assessment of the state of the Syrian revolution and provided a window into its future vision. Jolani argued that after nine years of war, the shattered state of Syria was evidence of revolutionary success, not failure. He argued that Assad mattered little today but that Syria was under a Russian and Iranian occupation, which necessitated an armed struggle for “independence.” Though he used Islamic terminology in many places, the message appeared intended for a broader audience of Syrians still loyal to resisting the Assad regime and its allies. With al-Qaeda divided and distant and ISIS still talking about a global struggle against “Zionists and Crusaders,” HTS’s message is intended to be approachable to what’s left of the revolution. This is a dangerous message.

As 2020 begins, Idlib looks set to remain the most intense zone of conflict in Syria. In addition to continued Turkish-Kurdish, Arab-Kurdish, and Israeli-Iranian hostilities, ISIS is also likely to sustain a slow and steady resurgence, particularly in the central desert. But most significantly, 2020 is likely to be the year when armed resistance spreads into more pockets of Syria. Driven by a continued rejection of the Assad regime, its brutal and corrupt practices, and the deep desperation felt by so many with no source of hope, the likes of HTS stand well-placed to drive a nation-wide guerilla insurgency. As a Levantine version of the Afghan Taliban, that should be a source of great concern for the Middle East. The only antidote to an intractable Syrian insurgency and all its inevitable regional spillover effects remains genuine justice and accountability in Syria. It is Syria’s neighbors that are best placed to push international policy in that direction.

2021 will be a defining year for Syria

Syria's Constitutional Committee: The Devil in the Detail

Weighing the scales of violence in northwest Syria