Idlib offensive: The view from Damascus 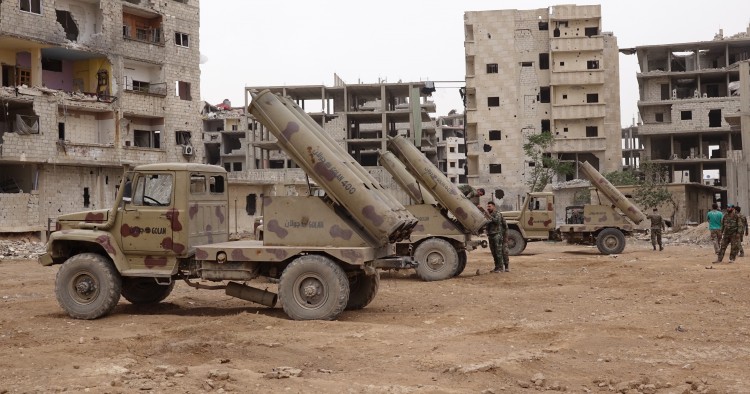 As fighting rages across the last opposition-held province of Idlib, the war in Syria has reached its brutal endgame. The Syrian army’s offensive, launched in early May, will not be quick, but rather marks the start of what will likely be a prolonged, violent, and ultimately costly campaign. If the first few weeks of the operation are anything to go by, resistance will be fierce — fiercer than initially expected — and as the world’s attention shifts toward Idlib, the stakes are now higher than ever.

The aims of the offensive are clear: Reopening the Damascus-Aleppo highway and retaking Idlib city, the provincial capital held by the opposition since 2015. The campaign started off well for the Syrian army, which rapidly pushed back opposition forces in northern Hama, scoring early victories in the strategic medieval fortress town of Qalaat al-Madiq, a major crossing point into Idlib, and capturing the town of Kafr Nabudah, now the epicenter of a battle that may decide the outcome of the offensive.

However, the advances were short-lived and a quick counter-attack by Hayat Tahrir al-Sham (HTS), the National Liberation Front (NLF), and Jaish al-Izzah seized back the town, forcing the Syrian army to retreat and rethink its plans. Kafr Nabudah has since changed hands yet again, with the Syrian army retaking it for a second time in the space of a week after a ferocious three-day bombardment, but it remains to be seen whether they will be able hold the strategic town.

Pro-government activists blamed a truce that Russia had brokered the previous week for the initial fall of the town, with Hassan Tashban noting how “the attacks on Kafr Nabudah were only possible because of the temporary truce put in place between Russia and Turkey.” Rabea Kalawandy, a reporter embedded with the Syrian army, reiterated the aims of the offensive: “The army decided to start an operation initially from Hama countryside and Latakia with the aim of advancing as deep as possible into Idlib, and that hasn’t changed.”

It is clear that the Idlib operation will be a long-drawn-out affair and more challenging than initially anticipated for the Syrian army, which has struggled on the frontlines. Attempts to capture the crucial town of Kabani in Latakia, spearheaded by Colonel Ghiath al-Dala’s elite forces of the 4th Armored Division, generally thought to be the government’s most effective troops, have been bogged down after being repelled. Although it has complete air superiority and significant firepower, the Syrian army will need a well-coordinated ground assault to penetrate Idlib. While that is possible in the long term, the costs will be high — perhaps too high for it to fully capture and hold on to the area.

In government-held Syria, the escalation in Idlib is being portrayed as a fight against Turkey. Brigadier General Suheil al-Hassan, known as the “Tiger,” who is in charge of the Hama sector of the operation, drove home this message as he rallied a group of soldiers near the frontlines around Kafr Nabudah: “You are fighting the fiercest type of enemy and the worst kind, you are fighting U.S. and Turkish special forces.” While the extent of Turkish involvement is unclear and possibly exaggerated, it is still seen as a hostile foreign power and backer of the opposition forces. Referring to Turkish assistance for militant groups in Idlib, Syrian official Fares Shehabi said in a social media post, “The country is now subject to external aggression.”

The involvement of HTS, an al-Qaeda affiliate, in the defense of Idlib has been crucial and controversial, and will continue to be so as long as the offensive goes on. Its pivotal role in the recapture of Kafr Nabudah for the opposition will ultimately be used by Russia and the Assad government to further the claim that Idlib is controlled by “terrorists.”

The fight for Idlib will be difficult: The terrain is rough and mountainous, ideal for ambushes, and provides plenty of cover for opposition fighters, who have effectively used anti-tank missiles to devastating effect, knocking out several Syrian army tanks and vehicles. Speaking about the difficulties of the fighting, retired Syrian General Mohammad Abbas Mohammad said, “We are fighting an army who are well-prepared, well-organized, and supported through a large number of suicide bombers in armored vehicles and drones.” He continued, “The Syrian army is attempting to safeguard its forces through withdrawal, so retreating at times is understandable.” Abbas also played down rumors that the offensive will end soon: “Withdrawing from positions doesn’t mean that you will escape from the battle itself; it will be a very long war and the militants have had plenty of time to prepare for the defense of Idlib.”

Yet, the immediate cost of the Idlib operation on the Syrian army is already being felt around the country. A Facebook post by Jableh News Network reflected a now-daily headline: “Fighting with pride and bravery we announce the martyrdom of Nebras Naseem Mia, who fell in the battles for Kafr Nabudah.” The Syrian Observatory for Human Rights noted that hundreds of fighters had died on both sides in the battle for the town.

Ultimately, the offensive will continue. The Syrian army has made that clear, dropping leaflets in opposition-held territory asking people to leave as the area is a zone for “military operations.” Simultaneously, the Russian Ministry of Defense announced the opening of two humanitarian corridors in the towns of Suran and Abu Duhur to allow civilians to evacuate the warzone in Idlib, usually a sign that the fighting will intensify and escalate further.

The Syrian army is not just fighting an array of different rebel groups in Idlib; it now also has to deal with the long-term consequences and end result of its policy of evacuations and negotiated deals, as rebels, militants, and civilians alike have been bussed from all corners of the country to this one final province. This has turned Idlib into a “Wild West” for armed groups from all over the country, and the fight to retake it is likely to be among the fiercest yet.

Danny Makki is a journalist covering the Syrian conflict. He has an M.A. in Middle East politics from SOAS University and specializes in Syrian relations with Russia and Iran. The views expressed in this article are his own.