If at first you don’t succeed: Turkey gears up for Istanbul election rerun 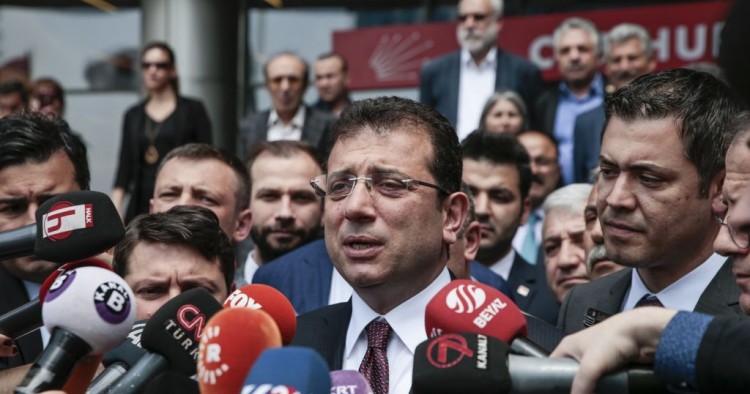 The March 31st local elections in Turkey were a breath of fresh air for those long resigned to the fact that the ballot box doesn’t matter anymore and that President Recep Tayyip Erdogan was invincible. To the surprise of many, the opposition captured all of Turkey’s major cities, including Istanbul, its biggest metropolis and economic powerhouse, as well as the capital, Ankara, boosting hopes that March 31st would mark the beginning of the end of Erdogan’s 17-year rule. The decision by Turkey’s Supreme Election Council (YSK) on May 6th to nullify the results of the Istanbul mayoral election and call for a new vote quickly changed the mood, however. Giving in to pressure from President Erdogan, who contested the Istanbul election won by the Republican People’s Party (CHP) candidate, Ekrem Imamoglu, by about 13,000 votes, claiming voter fraud and other irregularities, the YSK ordered a rerun on June 23rd. Pessimists now think they were right all along and that Erdogan will do everything not to lose Istanbul a second time.

Imamoglu, who was the mayor of Istanbul for 19 days before his victory was overturned, is not one of those pessimists. In an impassioned speech after the YSK’s decision, he vowed to fight on, and what he learned during his short time in power about the dealings of the mayor’s office might well provide him with ammunition. He is expected to reveal documents detailing the scale of waste and corruption at the Istanbul Metropolitan Municipality under the rule of the Justice and Development Party (AKP). He has already spoken about the dozens of cars at the disposal of the mayor, the millions budgeted for officials’ residences, and the precarious finances of a city sinking into debt.

The opposition’s strategy ahead of the June elections includes other measures as well. Imamoglu wants to reach out to the 1.7 million voters who stayed home on March 31st (out of a total of more than 10.5 million). The overwhelming majority of them are disgruntled AKP supporters frustrated over the mounting economic and social problems and the ruling party’s aggressive and divisive policies, which have exacerbated the country’s economic woes. Imamoglu is hoping to appeal to their “sense of justice” by highlighting how both he and Turkish democracy more broadly were victimized by the YSK’s decision. This strategy could work. Not everyone within the AKP is happy with the decision to rerun the Istanbul election. Among the most outspoken members of the party are those who once were closest to Erdogan. Former Prime Minister Ahmet Davutoglu and former President Abdullah Gul both criticized the YSK’s decision, arguing it has dealt a blow to Turkey’s democracy.

Imamoglu is also promising tangible solutions to the city’s mounting problems, including fighting corruption, providing services to the poor, helping students and the elderly, and cutting back on the “crazy” infrastructure projects launched by Erdogan that lined the pockets of his cronies. Even during his brief time as mayor, Imamoglu managed to build a track record by reducing the cost of public transport for university students and mothers with young children. This is likely to appeal to the disgruntled AKP base in poor neighborhoods at a time when the Turkish economy is struggling and unemployment levels are high.

Imamoglu also wants to appeal to Kurds, of whom there are several million in Istanbul. The supporters of the pro-Kurdish Peoples’ Democratic Party (HDP) overwhelmingly voted for him in the March elections, which was the key to his victory. But conservative Kurds who have traditionally voted for the AKP seemed to have stayed home. The ruling coalition’s belligerent tone vis-à-vis the Kurds, as opposed to Imamoglu’s moderate rhetoric before and after the March elections, puts the opposition’s candidate in a more favorable spot than his rival on the ballot in June, Binali Yildirim of the AKP.

The decision by several minor candidates to drop out and some of the smaller parties to withdraw their candidates could make a difference in a race that was won by a razor-thin margin in March. The decision of the Islamist Felicity Party (SP) to field a candidate is likely to work in the opposition’s favor as well. SP and the AKP share the same Islamist roots, but the former made an alliance with the opposition bloc in last year’s presidential and parliamentary elections. The SP candidate was ready to stand down and support the ousted opposition mayor, but many in the party thought SP voters were more likely to vote for the AKP’s candidate if the party did not field one rather than Imamoglu due to the CHP’s troubled history with the country’s pious masses.

In the run-up to June, the AKP is focusing its efforts on mobilizing supporters who stayed home last time around and appealing to conservative Kurds. The ruling party could have a shot at swaying its disgruntled supporters, particularly if well-respected members of parliament and local party officials go door to door to hold one-on-one talks with voters, which AKP officials have said they would do. Appealing to conservative Kurds, however, will not be easy given the AKP’s alliance with the hard-right Nationalist Action Party (MHP).

Yet, several significant challenges lie ahead for Imamoglu. Curbing pessimism within his own base and convincing them they could win again is one of them. A bigger concern, though, is the other tricks that Erdogan can pull out of his hat. Since the March elections, some voters have reportedly been removed from the rolls while hundreds of thousands of others who are registered elsewhere have been added. Reports of the AKP bringing in new voters made headlines in the opposition newspaper, prompting lawyers and opposition lawmakers to urge those who have been struck off the rolls to file a request for the mistake to be corrected. How effective these calls will be in preventing the government’s moves to alter the playing field in its favor remains to be seen.

But one thing is clear: It will be an uphill battle for both parties. More importantly, this election may also serve as the ultimate litmus test for what’s left of Turkey’s democracy. On June 23rd, Istanbulites are not only picking a new mayor for their city, but also a future course for their country.