The India-U.A.E. Strategic Partnership in Regional Context: A Zero-Sum Game? 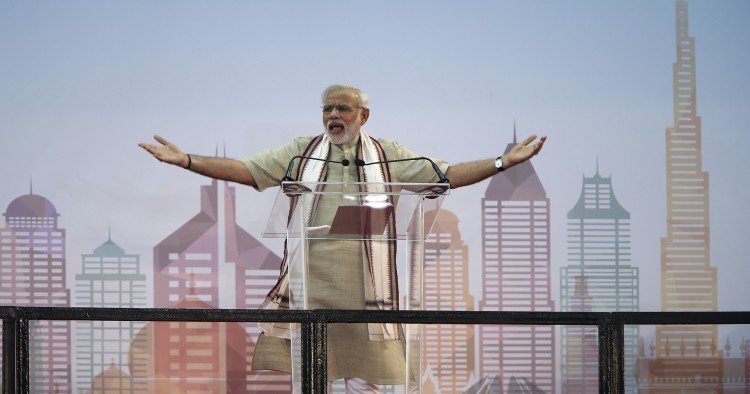 During the Cold War, India’s relations with the United Arab Emirates (U.A.E.) did not extend much beyond minimal trade and expatriate labor. Meanwhile, India’s diplomatic ties with the Gulf Arab countries, including the U.A.E., were negligible, primarily for two reasons. First, India’s passive alignment with Egypt and other socialist-leaning secular republics that sided with Russia automatically set it against the United States, and by extension, at odds with the latter’s Gulf security partners. Second, the Gulf Arab countries’ strategic and military partnership with Pakistan naturally meant that they sided with Islamabad on the Kashmir issue.[1]

In contrast, Pakistan, one of the first countries to officially recognize the newly independent U.A.E. in 1972, thereafter established a strategic partnership that has lasted for more than four decades.[2] Over the years, the Pakistani military has helped train the Emirati armed forces, while the U.A.E. has been a key donor of humanitarian aid to Pakistan and has been home to 1.5 million residents of Pakistani origin.[3]

However, with the end of the Cold War, India’s relations with the United States began to improve. So, too, did India’s economic performance and prospects. These changes created an environment more conducive to the development of India-U.A.E. economic relations. By the mid-2000s, India’s economic ties with the Emirates had grown stronger. This was underpinned by the contributions of the 2.6 million Indian expatriate workers and the injection of billions of dollars of Indian foreign direct investment into the Emirates’ economy, particularly in the real estate sector.[4]

Since the government of Narendra Modi took office in 2014, India and the U.A.E. have moved relatively quickly to consolidate their existing ties and to explore new areas of cooperation. During this time, they have elevated the relationship to a comprehensive strategic partnership, with the expressed intention of extending their cooperation to the security and defense spheres. This essay discusses these recent developments, with particular attention to the role of Pakistan as a constraining factor in India-U.A.E. relations going forward.

As of 2014, Prime Minister Narendra Modi’s first year in office, India-U.A.E. trade had climbed to $60 billion.[5] Since then, there has been further progress on the economic front, including signs of increased Emirati interest and involvement in the Indian economy. In 2016, for example, the U.A.E. committed to investing $75 billion in the infrastructure sector, an amount exceeding the previous total trading volume between the two countries.[6]

Significantly, there is also evidence that India and the U.A.E. have begun to break free of the constraints that have impeded the development of their relationship on the diplomatic and strategic fronts. Following the terrorist attacks on Indian military base in the Uri district north of Kashmir in October 2016, the U.A.E. issued a clear statement of solidarity with India,[7] and later expressed support for the cross-border surgical strikes carried out by India against the perpetrators, who were based in Pakistan.[8]

Prime Minister Modi’s two-day visit to the U.A.E. in August 2015, and Crown Prince H.H. Sheikh Mohamed bin Zayed Al Nahyan’s state visit to India in February 2016, provided the impetus for the two parties to explore new areas of cooperation.[9] Summit-level talks this past January culminated in the issuing of the Agreement of Comprehensive Strategic Partnership.[10] Commenting specifically on the substance and importance of the security and defense elements of the new agreement, Prime Minister Modi stated:

Security and defence cooperation have added growing new dimensions to our relationship. We have agreed to expand our useful cooperation in the field of defence to new areas including in the maritime domain. The MoU on Defence Cooperation, signed earlier today, will help steer our defence engagements in the right direction. We also feel that our growing engagement in countering violence and extremism is necessary for securing our societies … His Highness and I believe that our closer ties are of importance, not just to both our countries. They are also of significance to the entire neighbourhood. Our convergence can help stabilize the region.[11]

In January 2017, Emirati troops participated in India’s Republic Day parade, becoming one of the only two foreign military contingents ever to have taken part in this event — a further indication not just of the elevation of the bilateral relationship to the strategic level but of the shedding of political inhibitions. India and the U.A.E. now regularly host officials at all levels, underscoring the deepening ties between the two countries.[12]

These developments have taken place in a period marked by intensified engagement by the Modi administration with West Asian and Southeast Asian nations on the one hand, and the increased pressure experienced by the Gulf Arab countries, particularly the U.A.E. and Saudi Arabia, as a result of plummeting oil prices and the rising costs and risks of the military campaigns in Yemen and Syria.[13]

Simultaneously, while the aforementioned circumstances have drawn India and the U.A.E. closer together, the U.A.E.’s relations with Pakistan have experienced a downturn for a few notable reasons. Pakistan’s initial refusal to participate in the Arab military coalition in Yemen in 2015 was instrumental in pushing the Gulf nations towards India, if only as a way of signalling their displeasure with Islamabad’s decision. The suicide bomb attack in Kandahar, Afghanistan in January of this year that claimed the lives of five Emirati diplomats, though not directly attributable to Pakistan, nonetheless further strained the U.A.E.’s relations with Islamabad.[14] This begs the question whether further progress in the development of India-U.A.E. relations depends upon, or for that matter might lead to, the unravelling of Pakistan’s relationship with the Emirates.

Most national news channels in both India and Pakistan observe any diplomatic overtures made by the ‘other’ in binary terms. Thus, recent relations between India and the U.A.E. have been touted as the latter’s shift away from Pakistan. While this may have some truth to it, such a view of diplomatic relations lacks nuance. India’s foreign policy under Prime Minister Modi is more about seeking greater global status and power than simply outflanking Pakistan. Indeed, Modi’s warm relations with the Gulf nations date back to his time as Chief Minister of Gujarat.

Furthermore, Pakistan’s longstanding close ties with the U.A.E. will ensure it will not entirely lose its standing with the government. Pakistan reversed its decision to abstain from participating in the Gulf countries’ anti-terror coalition — something which had become a huge bone of contention back in 2015.[15] Thus, ruffled feathers have been smoothed. India can be said to become a more favored partner than Pakistan only when the U.A.E. armed forces are trained by the former rather than the latter. The chances of that happening anytime soon are remote.

Yet, the trajectory of Indo-Emirati relations will nonetheless be affected by, and have implications for, not just Pakistan but others. Until now, economic ties with the Gulf countries have been heavily skewed toward India’s purchase of hydrocarbons and receipt of remittances. However, bilateral trade is now expected to diversify into infrastructure, defense, agriculture, and maritime sectors. For instance, in the defense sector, Indian contractors will have the chance to produce more arms for the Gulf countries, which could eat into U.A.E.-Pakistan arms trade. This however, is more dependent on the technological and financial advantages provided by the Indian companies over Pakistani producers than pure diplomacy.

Second, there is clear evidence that the U.A.E. is determined to crack down on terrorist groups that have previously taken refuge in its jurisdiction. Thus, Dawood Ibrahim, one of India’s most wanted terrorists, departed the country for Pakistan and, according to Indian media outlets, the U.A.E. authorities have seized his assets.[16] More importantly, Pakistan-based terror groups, which target India, will find it harder to raise money in the U.A.E. due to the increased scrutiny on money transfers.

Third, it is now realistic to expect that the Gulf Arab states, and specifically the U.A.E., might henceforth adopt a more neutral stance on the Kashmir issue. India has been lobbying to decrease the country’s support for Pakistan within the Organization of Islamic Countries (OIC), which has historically condemned India.[17]

Fourth, as India and the U.A.E. exist and conduct their relations within the larger ambit of Asian politics, regional actors could influence their relations with each other. For example, China’s role in Pakistan, especially the China Pakistan Economic Corridor (CPEC), has great potential to strengthen Pakistan’s economically, which is likely to reduce Pakistan’s dependence on the Gulf States and thus increase its diplomatic heft. Given that Sino-Indian relations, notwithstanding their economic cooperation, are fraught, Beijing may try to out-invest India and hope thereby to gain influence in the Gulf.[18] The Saudi factor also looms large in India-U.A.E. relations.[19] Saudi Arabia could seek to steer the U.A.E. away from too close an embrace of India, should the latter’s relations with Iran increase substantially.

Fifth, the United States has been an actor in India-U.A.E. relations and will continue to be so. The United States’ shift away from the West Asian nations due its own production of shale oil was one reason why the U.A.E. sought other, stable markets. The United States’ displeasure with Iran is another reasonably affecting factor in this mix.

Sixth, Indian internal politics and bureaucracy will also play a role in the long-term aspirations of the Modi administration. Procedural delays, which are quite normal in India (as seen in the India-Iran Chabahar port construction), could scupper the execution of any trade deals. Indeed, U.A.E. Ambassador, Dr. Ahmed Al Banna, mentioned that the delay in the $75 billion infrastructure fund was due to India’s inability to institute the necessary governance infrastructure.[20]

Beginning in the early 1990s, India’s relations with West Asian nations gradually improved. Since Prime Minister Narendra Modi took office in 2014; however, the pace of progress in the development in India-West Asian relations has quickened. The forging of a comprehensive strategic partnership with the U.A.E. is indicative of this dramatic change. The expansion of the scope of this bilateral relationship to encompass defense and security elements signifies that the continued advancement of India’s relations with its West Asian neighbors is no longer hostage to the Indo-Pakistan rivalry, though it remains subject to other regional and domestic pressures and constraints.

[16] Abhishekh Chakraborthy, “Dawood Ibrahim’s Properties Seized, PM Narendra Modi’s Masterstroke, Tweets BJP,” NDTV, January 5, 2017, accessed April 28, 2017, http://www.ndtv.com/india-news/underworld-don-dawood-ibrahims-propertie…. This news has not been verified by the UAE government, but Indian media houses have mentioned that it is a direct result of Modi’s diplomacy in UAE.