Informal Networks, Formal Politics and The Politicization of Islam in Indonesia 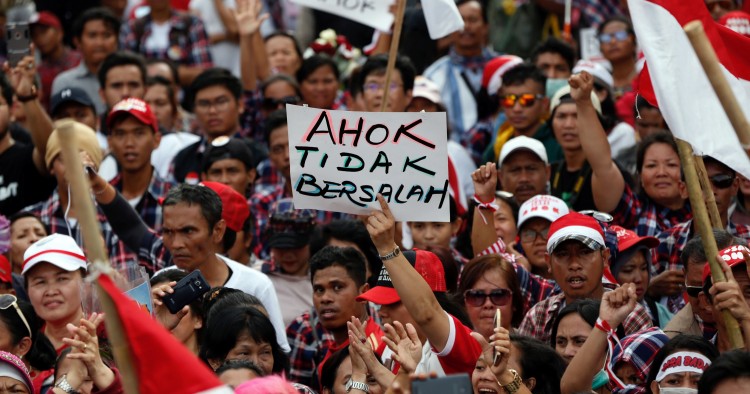 When Basuki Tjahaja Purnama, the Christian governor of Indonesia’s capital Jakarta, was sentenced to two years in prison for “blasphemy” in May 2017, it created world headlines. The verdict was seen as emblematic of a broader “Islamization” of Indonesian politics and society that has allegedly been under way since the collapse of the New Order military dictatorship in 1998.[1] Discriminatory laws and regulations against LGBT communities, religious minorities and women; attempts to ban the consumption of alcohol and “pagan” festivals; as well as calls for harsh jail sentences for “atheists,” “blasphemists,” and “communists” have led analysts to speculate that there is a deep societal transformation under way that casts a “shadow”[2] over Indonesia’s “civil Islam.”[3]

However, the aforementioned developments have more to do with the democratization of politics since 1998 and the changes in state-society relations that resulted from it than they have with changing religious attitudes and social mores. In other words, Indonesia is experiencing a politicization of Islam rather than an Islamization of politics.

Democratization and the Rising Importance of Informal Networks

While Suharto had ruled Indonesia with an iron fist for 32 years, institutional reforms that were adopted after he was forced to step down in the context of the Asian Financial Crisis in May 1998 created a newly competitive political environment. Indonesia has seen legislative elections at the national, provincial and district level every four years since 1999. In addition, the president, as well as governors and district heads have been directly elected in regular intervals too.

As a consequence, Indonesian politicians have faced new challenges. The biggest obstacle that they have had to overcome on the way to a post in the executive or legislative branch of government is the mobilization of voters. Indonesian politicians have come to rely on informal networks in their quest to accumulate votes. This is for a variety of reasons. First, despite 20 years of democratization, politicians cannot and do not rely on policy platforms to mobilize voters. Indonesian politics remain deeply transactional. Corruption and rent-seeking is systemic and endemic at all levels of government. While the Indonesian press is free, the quality of reporting is poor and often amounts to little more than a weaponized narrative in the services of the government.[4] Overall, the quality of the public discourse and political debate remains extremely low. Instead, vote-buying and “money politics” reign supreme in all election campaigns. Second, Indonesian political parties have few resources to offer to candidates. As a result of three decades of authoritarianism, during which political parties were not allowed to establish party structures below the national level, the majority of Indonesian parties lack genuine grassroots. They are also cash poor. Consequently, most political parties in Indonesia can provide neither institutional support nor financial assistance to their candidates. In addition, political parties enjoy very little support among the Indonesian electorate, as they are seen as corrupt and elite-driven. This includes parties with an Islamic platform, many of which abandoned their ideological stance after entering Indonesian Realpolitik.

Unable to employ either policy platforms or party apparatuses to mobilize voters, Indonesian politicians have tried to use informal networks in their quest to accumulate votes.[5] Such networks usually include extended family structures[6] but also any other group that may have a strong presence in a given constituency. Informal networks that have been incorporated into past election campaigns have ranged from diaspora associations[7] to organized crime syndicates[8] and religious networks.[9]

Many of the religious networks that have been approached by Indonesian politicians in recent years have their origins in the formative years of the Republic of Indonesia. After Indonesia declared independence in 1945, it adopted a secular-nationalist constitution. This upset groups that wanted a state based on Islamic law. Subsequently, some of these groups aligned under the name “Darul Islam” and began revolting in several provinces. The Indonesian national government ended the last such revolt in 1965. While the informal networks behind these revolts were defeated, they were not eliminated. During the New Order military dictatorship they simply moved underground, only to re-emerge after the collapse of the authoritarian Suharto regime in 1998, renewing their call for a state based on Islamic law.

To understand why these informal networks have become influential in politics only after 1998, one has to take the aforementioned changes within the formal political system into account. Secular-nationalist politicians that need to find ways to mobilize the electorate have entered alliances with informal Islamist networks because they have helped them accumulate political, ideological, and financial resources that can be dispersed during election campaigns. In exchange, secular-nationalist politicians have upped their religious rhetoric during campaigns and have adopted hundreds of shari’a regulations in recent years.

The recent arrest of Jakarta governor Basuki Tjahaja Purnama mentioned at the beginning of this essay is a timely reminder of the rather worldly motivations driving the politicization of Islam in Indonesia. Accused of having insulted the Qur’an during a campaign rally, the Christian governor’s poll numbers began to decline after his opponent Anies Baswedan decided to use the “blasphemy” charges against his opponent. Baswedan also teamed up with Islamist networks situated outside formal politics in a “religiously tinged” election, as the New York Times described it.[11]

Anies Baswedan had no previous affiliations with these Islamist networks and had never publicly supported political Islam before he decided to run for governor of Jakarta. In fact, after having received a PhD in Political Science and accolades from Northern Illinois University in the United States,[12] he became a favorite of the international development industry and foreign governments.[13] Casting himself as a “progressive” and a “reformer,” he managed to become Minister of Education and Culture of Indonesia in 2014.

In short, rather than a sign for a deep societal transformation, Indonesia’s many shari’a regulations and religious rhetoric should be seen as the result of political power plays between politicians for whom support for an Islamic agenda is not an emotional imperative but rather a transactional necessity in a newly competitive political environment.

The Indonesian case offers various insights into the role informal networks may play in democratizing Muslim-majority countries. As I argued in my book, The Politics of Shari’a Law: Islamist Activists and the State in Democratizing Indonesia,[14] Indonesia’s experience shows that political parties may struggle to incorporate, aggregate, and represent Islamist sentiments that exist at the margins of the political arena. Furthermore, the Indonesian case also attests to the importance of closely studying the conditions under which informal political networks gain and maintain influence in formal politics. At present, research on informal networks and social movements focuses almost exclusively on the conditions that facilitate the mobilization of such networks. Finally, and perhaps most importantly, the Indonesian experience shows the urgency of studying dynamics within the formal political arena and the interaction between formal and informal politics that result from it. Informal networks with an Islamist agenda have existed in Indonesia for decades. While they were relegated to the margins of the political arena during the authoritarian New Order era, democratization and the ensuing political dynamics among secular-nationalist politicians have allowed these groups to become more vocal, visible, and influential. In other words, without the help and active support of the Indonesian state and secular-nationalist politicians, these groups would have remained as inconsequential as they had been during the three decades prior to 1998. The forces driving the adoption of shari’a regulations in Indonesia as well as recent dynamics surrounding the arrest of Jakarta governor Basuki show that, if anything, rather than the state having an Islam-problem, Islam in Indonesia has a state-problem.[15]