International Politics of Syrian Refugee Return: The Case of Lebanon 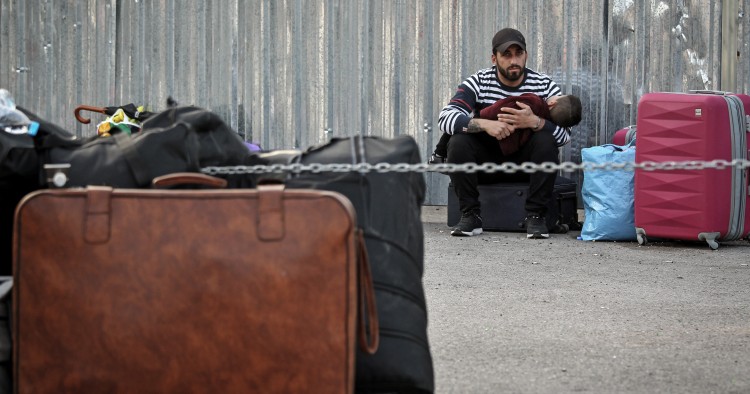 The Syrian refugee crisis has been one of the major challenges facing the Lebanese government in recent years. Since the eruption of the civil war in Lebanon in 2011, over one million Syrians, many of whom are not officially registered as refugees, have flooded the country. Given the magnitude of this refugee influx and its implications for the country’s economic, social and political stability, Lebanese authorities have sought — and received — substantial assistance from international actors. International financial support is primarily through multilateral channels — namely, United Nations (UN) institutions — that the international community has contributed resources and deployed staff to assist and support Syrian refugees in Lebanon and elsewhere. The UN has played the most prominent role in this domain, providing financial support and shelter for the Syrian refugees in camps dispersed across the country.

However, at the political level, the international community has been divided over how to tackle the refugee issue, especially as the fighting has ebbed and the Assad regime’s hold on power seems assured. The United States and the West in general have rejected the repatriation of refugees, while Russia and Iran — the Assad regime’s principal allies — have called for their immediate return. There are three sets of actors whose involvement has significantly affected the Syrian refugee situation in Lebanon: UN agencies, humanitarian organizations, and key regional countries (notably, Iran) and major powers (especially the US, EU, and Russia). This article briefly examines the international politics of Syrian refugee return in the case of Lebanon.

By the beginning of 2018, it had become clear that the Assad regime had consolidated its influence and control almost all over Syrian territories. In other words, the war was, in effect, ‘over.’ The regime was able to defeat the opposition in the most important cities: Damascus, Homs, Hama, Aleppo, Latakia, Tartus, Palmyra, and Abu Kamal.[1] It was also able to besiege the major opposition groups in Idlib, northern Syria. This made Assad the de facto power in the country.

Yet, foreign aid to refugees in Lebanon had dropped off even before 2018. The percentage of aid required for UN agencies dropped from 54% and 46% in 2015 and 2016, respectively, to 43% in 2017.[2] By mid-2018, reports began to surface highlighting assistance ‘gaps’ and suspension of aid to certain families; only 18-22% of required aid was received.[3] In 2018, the UN High Commissioner for Refugees (UNHCR) received just $887 million of the $2.68 million required to aid the refugees.[4] Due to funding shortages, UNHCR support to refugees was limited “to the most vulnerable families that were unable to afford their basic needs of food, shelter and healthcare.”[5]

As the Assad regime’s control of the majority of Syrian territories at the outset of 2018 took hold, the subject of ‘refugee return’ began to gain prominence domestically and internationally. At the domestic level, Lebanon was divided between pro- and anti-Assad coalitions. Two concepts were coined which reflected the positions of the contending political parties: ‘safe return’ and ‘voluntary return.’ Hezbollah and the Free Patriotic Movement — close allies of the Assad regime and of Iran — called for their return to ‘safe areas’ (i.e., areas under Syrian government control). Lebanese President and founder of the Free Patriotic Movement, Michel Aoun, insisted on the immediate repatriation of the refugees, regardless of any political settlement to end the war between the warring parties.[6] Foreign Minister and head of the Free Patriotic Movement, Gebran Bassil, “urged Syria … to offer guarantees on property rights and military service to encourage Syrian refugees to return home.”[7]

Their positions stem from two main considerations. Firstly, they fear that the continued presence in the country of a large number of Syrian refugees will upset the demographic balance, since the majority of them are Sunnis. In fact, they regard the demographic balance as being so precarious that any fluctuation might lead to instability and sectarian conflict. Secondly, they believe that the refugees’ return will remove one of the major obstacles to the Syrian regime’s consolidation of power in the country and thus signal its victory over the opposition.

However, anti-Assad parties, such as the Future Movement, Progressive Socialist Party and the Lebanese Forces Party — close allies of Saudi Arabia and the United States — have insisted that the refugees cannot be ‘forced’ to return, i.e. their repatriation should be voluntary. Their reasoning is that many of those displaced fled Syria to avoid military conscription or because they are dissidents. Their position also stems from their opposition to Assad and their willingness to exert pressure on the regime in Damascus and its Lebanese allies to provide more concessions to the Syrian opposition.

The domestic division between supporters and opponents of Syrian refugees’ repatriation mirrors the international division between international actors in the Syrian conflict. The US, European Union, and several Arab states (e.g., Qatar and Saudi Arabia) have rejected the notion of ‘safe return.’ They instead called for voluntary return. Their position stems from their attempt to exert pressure on Assad to offer concessions to the opposition.

The United Nations, for its part, has judged that the conditions “are not right for the safe, orderly return of large groups of refugees from Lebanon to the homes they fled in Syria, although fighting in that war-torn country has largely subsided.”[8] ‘Repatriation’ (i.e., voluntary return) is one of the four “durable solutions” traditionally advanced by the UNHCR — the others being “support [for] host country resilience; enable refugee self-reliance; [and] expand access to resettlement and other safe pathways to a third country.’’[9]

Many of the Syrian refugees have the same concerns about repatriation since they are apprehensive, as a climate of fear persists. They regard “the move [as] premature and risky, as the country is still not prepared and safe enough for the return of refugees.”[10] Meanwhile, the United States has insisted that the return should be “under these conditions — safe, voluntary, dignified returns at the time of their choosing and when it is safe to do so.”[11]

Thus, the circumstances surrounding the question of repatriation are highly politicized, with donors to organizations supporting Syrian refugees holding positions that reflect their respective — and often conflicting — political agendas. The flow of financial support provided by the leading donors — the US and Kuwait (via UNHCR), UNICEF, the World Food Programme (WFP), ECHO (via UNHCR and Danish Refugee Council (DRC) — has been inconsistent.[12] The sometimes conflicting political agendas of donors has also hampered the establishment of a clear common policy and impeded coordination.[13]

More troubling, the international players, especially the opponents of the Assad regime, have reduced their financial support to refugees. In so doing, they have sought to exert pressure on the regime to tackle the refugee problem, as well as on Lebanon and other host countries to refrain from normalizing relations with Damascus pending a political settlement between the warring parties. The most important factor behind this policy is that repatriation “helped fuel the perception that Syria’s war is ending and it is now time for Syrians to return, which was capitalized upon by the Assad regime and its ally, Russia.”[14]

At the political level, several international initiatives were submitted by foreign states to tackle the refugee crisis. The most prominent was the Russian Initiative, which set in motion a series of steps for the return of the refugees in Lebanon, Jordan and Turkey.[15] Although the details of this Initiative have not been made public,[16] it reflects a firm decision by Moscow to expedite the political process in Syria and secure its ally’s power and influence throughout the country. In the words of one commentator, “The return en masse of refugees as a political strategy would provide a measure of international legitimacy to the Syrian government.”[17] The point of proposing this Initiative is that Moscow “knows [that] the file of refugees will be the passage to convince the rest of the world of rehabilitating the Syrian regime and start financing reconstruction.”[18]

Despite the importance of the Russian Initiative, it faces several obstacles. Firstly, the Russians are convinced that the Initiative cannot be implemented without international support from Europe, the Gulf states, and the United States.[19] This is because these countries have significant influence in the conflict. For example, the United States has a close alliance with the Kurdish political parties in northern Syria. French President Emmanuel Macron proclaimed that the refugees cannot return unless a political settlement has been achieved, “as these refugees massively fled, above all, abuse committed by the [Syrian] regime.”[20] Secondly, refugee return en masse is not possible without funding for and investment in the country’s infrastructure.[21] Moscow is incapable of financing reconstruction on its own. Thirdly, the Initiative is unlikely to gain traction absent support from UN agencies and associated organizations: “Any efforts to repatriate refugees bilaterally or outside the umbrella of UNHCR raise red flags because the fundamental international legal premise on which repatriation occurs cannot be ensured, monitored or enforced.[22] Fourthly, the Initiative might face obstacles from the Syrian government. For the Assad regime, the return of a massive number of refugees will have significant implications legally, financially and security. Damascus “fear[s] … the influx of large numbers of people, as it faces many challenges to deliver needed services to those already in the country.”[23]

The approaches taken by foreign actors regarding the Syrian refugee crisis in Lebanon largely reflect their political positions with respect to the Syrian regime. The Russian government has sought to solve the refugee crisis as soon as possible while Washington has sought to delay their return until a final settlement is reached with Assad. In this respect, “the organization of returns from Lebanon is more a tactic of war than a sign of peace.”[24] Amidst the political wrangling over the issue of refugee return, the funding made available to the Lebanese government, the relevant UN agencies, and other humanitarian organizations to tackle the crisis has dwindled.

Meanwhile, over the past year, Major General Abbas Ibrahim, head of Lebanon’s General Security directorate, has led the effort to organize the return of thousands of refugees in coordination with Damascus.[25] For the many Syrian refugees who have rejected repatriation and are facing increasing pressure to return but are fearful of doing so, especially given that they have not been afforded individual property rights or security guarantees, the future appears bleak. Changing this dynamic will require a political settlement in Syria endorsed by the international and regional states to end the conflict.

[12] Dalya Mitri, “Challenges of Aid Coordination in a Complex Crisis: An Overview of Funding Policies and Conditions Regarding Aid Provision to Syrian Refugees in Lebanon,” The Civil Society Knowledge Centre, May 23, 2014,. https://civilsociety-centre.org/paper/challenges-aid-coordination-complex-crisis.

[17] Jesse Marks, “Why Syrian Refugees are at Risk of a Forced Return to Syria,” Washington Post, February 13, 2019, https://www.washingtonpost.com/news/monkey-cage/wp/2019/02/12/syrian-refugees-face-growing-pressure-to-return-to-insecure-conditions-heres-why/?utm_term=.eb55a99e4d7-0.

[20] Ibid. It is noteworthy that the states of the European Union face divisions over how to tackle the refugee issue, although the official position of EU is to boycott the Assad regime. Several EU states, such as Poland and Italy, have called for normalizing the relations with the Syrian regime to coordinate the return of the refugees. (See Labib Fehmy, “Pledges of the Third Brussels Conference: Assisting the Syrians without Supporting the Regime,” Alaraby, March 14, 2019, https://www.alaraby.co.uk/politics/2019/3/14/عهدات-مؤتمر-بروكسل-الثالث-مساعدة-السوريين-دون-دعم-النظام). Their concerns stem from the cultural, economic and political implications of the refugees in these countries. Their positions coincide with the rise of right-wing populism. The absence of clear refugee policy would further complicate the efforts for refugees’ repatriation.

[22] Marks, “Why Syrian Refugees are at Risk of a Forced Return to Syria.”