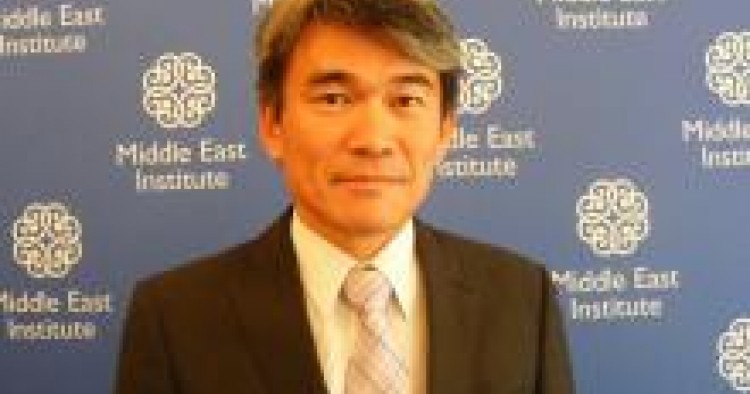 Cultural Encounters with the Middle East

Question: Mr. Hashimoto, you are trained as an Arabist and have spent considerable time in the Arab Middle East during your professional career. What unexpected views did you encounter among your Arab colleagues and friends regarding Japanese or, more broadly, East Asian culture?

Answer: I was initially surprised to learn that Arabs consider themselves as Asians, and feel close, culturally, to East/South Asians.

Question: You said you were “initially surprised”. Why did the notion of Arab-Asian cultural affinity surprise you, and how did your thinking about this subject evolve?

Answer: Of course, I had been well aware of the geographic contiguity of the Middle East (West Asia) and South/East Asia — our being distant neighbors within a vast “maritime Asia”. I also immediately recognized some broad similarities between Arab and, say, Japanese and indeed Asian cultures generally. The most obvious similarity is the strong commitment to the family, extended family and community, as opposed to the individualism that characterizes some other societies. But what surprised me was the prevalence and intensity of the view among Arabs that there is a cross-cultural connection that is deeper than perhaps objective reality would suggest.

Question: In your judgment, Mr. Hashimoto, what could explain this deeply felt cultural affinity?

Answer: I suspect that this strongly felt cultural affinity has grown out of the Arab historical experience, especially over the last few centuries. That experience has been marked by an association with the West that many, if not most Arabs do not characterize as positive and uplifting. I believe that their affinity with Asia represents, above all, their assertion of identity — a desire to embark on a new path, one that is not tied as tightly nor subordinated to the West as in the past.

Question: But surely, Mr. Hashimoto, there is more to the Arab affinity to the East than making a clean break with the past?

Answer: Yes, there is more to it. Most Asian countries are success stories today. To varying degrees, they have emerged from the colonial experience and/or from destructive wars as far stronger and much more inclusive economically, socially, and politically. I suspect that many Arabs gravitate to Asia partly because they represent both the achievements and the possibilities of modernization.

Question: Your reference to “modernization” is intriguing. If you are correct, that Arabs’ identification with Asia is somehow related to their pursuit of a better future, can you offer any thoughts about the modernization processes in these two regions?

Answer: I would begin by observing that Arab and Asian countries alike are continuously striving to modernize. However, for a variety of reasons, the Arab world and much of Asia are at different stages of that process. Let’s focus on Japan for a moment. The mid-19th century marked the beginning of the beginning of Japan’s modernization process. The Meiji Restoration (1868-1912) led to enormous changes in Japanese political and social life. The leaders of that revolution realized that Japan had fallen behind the rest of the world and felt threatened by the colonial powers of the day. After initially consolidating their power, they abolished the rigid class structure, introduced land reforms, and enacted other measures that accelerated Japan’s industrialization. These efforts helped forge a “New Japan”. That is not to say that modernization for Japan was linear. There were detours and distortions for which the Japanese people ultimately paid a heavy price. But some of the key reforms enacted during the Meiji period — reaffirmed, reinforced and much further expanded after the Second World War — transformed Japan. The reason why I dwell on this aspect of the Japanese experience is that I see the Arab world today as being at a crossroads, akin to that of Japan on the eve of the Meiji period. The Arab Spring represents a unique opportunity for the peoples of the Arab world to decisively shape their future.

Question: Reflecting for a moment longer on the Japanese experience, what do you hope that future might, or should look like for Arab countries?

Answer: It is not for me personally, Japan or anyone else to chart their future. Shaping the future of the Arab world lies with the Arab people. But what I hope, as do many others, is that the current period of transformation will lead Arab countries to become progressively more inclusive economically, socially, and politically. In that sense, I hope that Japan’s achievements and those of many of its Asian neighbors would serve as a source of inspiration.

Question: You mentioned several times the word “inclusiveness”. In your assessment, what are some of the factors that could inhibit progress in the Arab world in developing more inclusive societies?

Answer: At the present time, in my estimation, there are two such factors. The first is the polarization between secular and religious forces. The second is religious extremist elements, though they represent a very small fraction of society. It is difficult to find an analogue in modern Japanese history. There is no Buddhist equivalent of shari‘a — no religious doctrine or body of laws or strictures governing ordinary daily life and thus no comparable struggle over what is or isn’t within the private domain. However, elsewhere in Asia, where these questions of identity have been, and are still being played out, we see that progress can be achieved, that secular and religious forces can find common ground. Here, I believe that it will take enlightened leadership: the wisdom to realize that it is in everyone’s interest — it is in the national interest — to compromise and the political courage to do so.

Japan and Middle East Policy: Priorities and Conduct in a Time of Transition

Question: What are Japan’s priorities with respect to the region and how, if at all have they changed in recent years?

Answer: Japan’s policy priority remains unchanged: it is to contribute to international and regional efforts to maintain and restore stability in the Middle East, particularly in light of our country’s dependency on the region’s energy resources.

Question: Do the current trends and patterns in the Middle East and in Japan itself provide an opportunity, or indeed necessitate that Tokyo adjust its approach to the region?

Answer: Japan has sought to be a generous and reliable partner. Over the years, Japan's primary contributions to regional stability have been through humanitarian and overseas development assistance. Japan remains committed to providing financial and technical assistance for humanitarian and development purposes. Japan has also supported peace efforts in the region, both financially and diplomatically.  One could imagine scenarios in which Japan could add more of a political focus to its activities in the region, in close coordination with partners and other outside players.

Question: Do you foresee any obstacles in Japan sustaining or possibly even augmenting its economic and diplomatic activities in the region?

Answer: Looking to the future, it might be difficult for Japan to sustain the current volume of financial assistance to the region, given its own demographic profile — that of an aging population. At the same time, however, technological innovation could enable Japan to surmount some of the challenges it faces at home while remaining a significant source of development assistance. Meanwhile, one can imagine China playing a more assertive political role in the Middle East as its interests in the Middle East become even more extensive. This will require that Japan reassess its own role and activities in the region.

Question: Earlier you also mentioned “adding political focus” to Japan’s activities in the region. What exactly do you mean by this? And what could inhibit Japan from doing so?

Answer: Essentially, I am referring to a more proactive Japanese diplomatic role in the region. Until now, Japan has tended to play the role of facilitator. Opportunities may arise for Japan to play multiple diplomatic roles — as facilitator, mediator or in other capacities. In principle, there is no limitation. Japan is widely perceived in the Arab world as a “benign power”. It has had no territorial ambitions, carries none of the “historical baggage” of the colonial era or Cold War period, and has not sought to project military power into the region. Provided that there is “political space” (i.e. assistance is welcomed by the regional players and could be constructive), I can envision Japan playing a more active role.

Question: So, are you referring exclusively to a more proactive diplomatic role aimed at conflict resolution?

Answer: No, to the contrary. Let me put it this way: the so-called “Arab Spring” is still unfolding, as are its consequences. In this climate, I feel that it is extremely important to help stabilize the economies and consolidate those Arab states in transition (and those that will be in transition sooner or later). For this to occur, these countries need not just a short-term economic boost but also serious political/social reform. The latter can only be accomplished, I believe, by making the state structure more inclusive. From this perspective, Japan can play a meaningful role, sharing its own experience, as well as the lessons learned through its cooperation with the rapidly growing Southeast Asian countries that underwent a transformation.

Question: What initial steps would you suggest that Japan take to explore and then reach out to offer the fruits of its own experience?

Question: What was the focus or particular emphasis of Japan’s cooperation with Southeast Asian countries to foster an “inclusive state structure”?

Answer: Public-private partnerships (PPP) were critically important elements of efforts to support infrastructure development and capacity building in Southeast Asia. In fact, these partnerships, by definition, broaden the base of participation. The help “open” the political system. They encourage and reinforce what is, or should be the overarching aim of the transformation process, namely, inclusivity.

This publication is the summary of an interview conducted by Dr. John Calabrese with Mr. Naofumi Hashimoto. The remarks herein represent Mr. Hashimoto's personal views and not necessarily those of the Government of Japan.