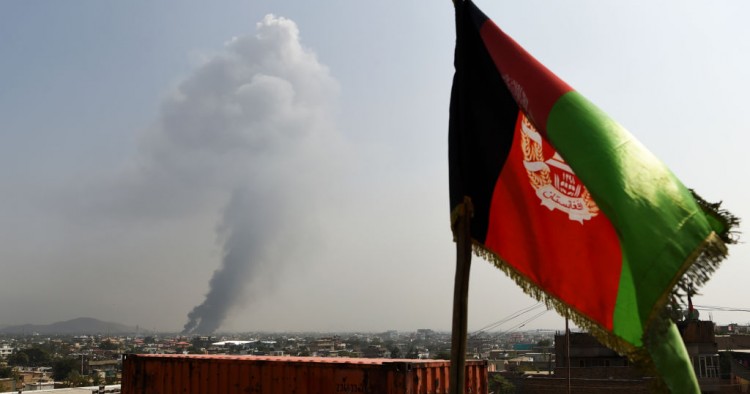 Frantic efforts are being made to clear the way for intra-Afghan talks, the logical next step forward in the implementation of the February U.S.-Taliban deal. Abdullah Abdullah, the head of the High Council for National Reconciliation, is getting ready to hold the talks, while the Taliban chief, Hibatullah Akhundzada, has reportedly asked members of the group’s Rehbari Shura (Leadership Council) to share their proposals to finalize the agenda. This is all well and good, so long as one understands that the talks will not take place in a vacuum and cannot happen on their own. The recent meeting in Doha of Zalmay Khalilzad, the U.S special envoy for Afghanistan reconciliation, and Gen. Scott Miller, the commander of U.S. forces in Afghanistan, with Mullah Baradar, the Taliban deputy leader, should be seen in this context.

To be sure, when the stakes in a conflict are lower, the key stakeholders can afford to have intense political disagreements, but in a conflict as bloody and intractable as Afghanistan’s, all parties concerned must have an indivisible unity of purpose. But unfortunately, at a time when most Afghans are desperately seeking to live in peace, the Taliban’s perception seems dominated by a narrative obsessed with conflict and confrontation. Distracted and with declining interest in Afghanistan, U.S. President Donald Trump remains focused on getting American forces out of the country, while Pakistan seems determined to shore up its position against India ahead of potential intra-Afghan talks.

Showing greater seriousness about the intra-Afghan process, Pakistan’s Army chief, Gen. Qamar Javed Bajwa, visited Kabul to hold key talks with President Ashraf Ghani and Abdullah. According to Abdullah, “Bajwa expressed Pakistan’s support for our efforts and for the earliest possible start of intra-Afghan talks. … I reiterated Pakistan’s constructive role in this regard.” These words, coming from a pro-India and anti-Pakistani figure like Abdullah, must have been music to the ears of Pakistan’s security establishment, which has the final say over the country’s Afghan policy. By highlighting its public support for peace just ahead of the intra-Afghan talks, Pakistan is keen to improve its largely negative image among the Afghan people. That Bajwa’s “Kabul sojourn was a military-led initiative” was evident in the inclusion of the Inter-Services Intelligence chief as part of his delegation. The Pakistani government has also appointed a special envoy for Afghanistan, Mohammad Sadiq, who previously served as Pakistani ambassador in Kabul from 2008 to 2014. His appointment is an unmistakable sign of Pakistan’s attempts to maneuver itself into a strong diplomatic position in the intra-Afghan dialogue.

The imminent start of the intra-Afghan dialogue will increase the pressure on the Indian government to abandon its policy of non-engagement with the Taliban, which has left it boxed into a corner. In one of his recent trips to New Delhi in May 2020, Khalilzad asked the Indian government to give up its long-held opposition and begin direct talks with the group. According to a recent report by the UN’s Analytical Support and Sanctions Monitoring Team about the Taliban, however, there are nearly 6,500 Pakistani terrorists in Afghanistan, largely members of Lashkar-e-Taiba and Jaish-e-Mohammad. This is likely to prove a major irritant even if New Delhi is contemplating stepping back from its maximalist approach. Pakistan’s intelligence agencies have long supported these terrorist groups against India, and according to the UN report, “senior leadership of Al-Qaida remains present in Afghanistan, as well as hundreds of armed operatives, Al-Qaida in the Indian Subcontinent, and groups of foreign terrorist fighters aligned with the Taliban. … Relations between the Taliban, especially the Haqqani Network, and Al-Qaida remain close, based on friendship, a history of shared struggle, ideological sympathy, and intermarriage.”

But it should not come as a surprise that despite these revelations on the continuing links between the Taliban and al-Qaeda, the report has received little attention from those who matter. Moreover, it still remains unclear how to convince Pakistan to change its behavior and address the issue when most of the key stakeholders have come to believe that it is key to the intra-Afghan dialogue, which cannot progress meaningfully without Rawalpindi’s acquiescence. While it is true that Pakistan has significant leverage over the Taliban and many influential Pakistani strategists have often rationalized Islamabad’s support for the group as a bulwark against India’s influence in Afghanistan, the Taliban is no Pakistani puppet and it is capable of maintaining strategic autonomy over issues it believes are crucial to its survival.

What’s next for the Taliban?

Speculation is rife about an imminent Taliban summer offensive, suggesting cynicism may be justified regarding the disconnect between the group’s rhetoric and its violent actions. The Taliban’s enthusiasm for deal-making has not been matched by a noticeable political commitment to peace, not least in helping to resolve the conflict. What is left open to interpretation is whether the Taliban will accelerate the trend toward a Hobbesian Afghanistan or whether it will help to build a more peaceful and democratic one. It should be kept in mind that the Taliban’s commitment to jihad and its Islamic identity are not simply integral components of its identity as an insurgent group, they are also fundamental pillars of its legitimacy among non-state actors.

While there is a natural convergence of interests between the U.S. and India on Afghan stability, there is no active military-diplomatic collaboration on ongoing efforts to end the long-standing conflict. In fact, President Trump is so wedded to the idea of recalling every single American soldier from Afghanistan that the Pentagon seems to have largely accepted Pakistan as a valuable partner in this enterprise. Even Khalilzad’s Russian counterpart, Zamir Kabulov, believes that India’s policy of not having any official contact with the Taliban has outlived its usefulness in view of the “eventual transformation of the Taliban movement into an influential legal political force in Afghanistan.”

President Trump’s recent Tweet about Afghanistan — “After 19 years, it is time for them to police their own country. Bring our soldiers back home but closely watch what is going on” — must be seen as clear sign of American determination to end the costly military burden that the U.S has been carrying for so many years now. With that in mind, Trump has realized that he can’t have an antagonistic Pakistan until U.S. troops have pulled out completely.

The decline in American interest in Afghanistan will doubtless usher in a period of renewed instability and conflict. For better or worse, having withstood the world’s mightiest military for almost two decades, the Taliban is in a favorable position to ensure that an intra-Afghan settlement is broadly on its terms. With Washington appearing too distracted to be a worthwhile partner, new political thinking must therefore emerge in New Delhi regarding its Afghan strategy. However, this does not mean it should eat the poisoned fruit of American retreat and abandon its long-standing allies in the Kabul regime.

There are many more hurdles still to come

The launch of the intra-Afghan talks will be just the beginning of many potential roadblocks. As Abdullah is now turning his mind to the details of the agenda for the intra-Afghan talks, the first question that comes up will be: Does the Taliban have a democratic bone in its body? Given its obvious disdain for Afghan politicians, it can be argued that in its lexicon words such as dialogue and negotiation are just a smokescreen designed to hide the group’s true colors and avoid pressure from civil society and human rights groups.

Since the Taliban has concentrated so much on making battlefield gains in order to have an upper hand in the negotiations, there are many questions about its commitment to peace. Hence, it would be prudent on the part of the Taliban to demonstrate its seriousness by reducing the level of violence against Afghan security forces and agreeing to long-term cease-fire. The commander of CENTCOM, Gen. Kenneth McKenzie, voiced these concerns during an event at MEI on June 10, saying that since the Kabul regime is trying to “coalesce around a potential bargaining position that will allow them to go into negotiations,” it is time for the Taliban to shun the role of spoiler and “demonstrate that they’re going to be faithful partners, too” in creating a suitable institutional framework for talks.

It is also unclear whether Hibatullah, who took over the Taliban’s leadership after Mullah Akhtar Mohammad Mansur was killed in a U.S. drone attack in May 2016, commands the sort of unconditional obedience from the rank and file needed to enforce a deal should one be struck. On top of speculation that some top Taliban leaders are suffering from COVID-19, rumors about the group’s cohesion are not just academic — they have serious repercussions on the prospects for talks.

The trust deficit remains a major barrier to the success of the intra-Afghan dialogue. It may be debatable whether the continued links between the Taliban and al-Qaeda represent a breach of the U.S.-Taliban peace deal, but there can be no doubt that the Taliban must seek to address the contradictions of its positions. Having gained de-facto legitimation of its desired status, the Taliban must now go the extra mile to assure its detractors that it has no plans to sabotage the Kabul regime while having a superficial dialogue with it. Its failure to do so will only breed disillusionment and disappointment over the entire process.