Introduction To In the Shadow of Benazir 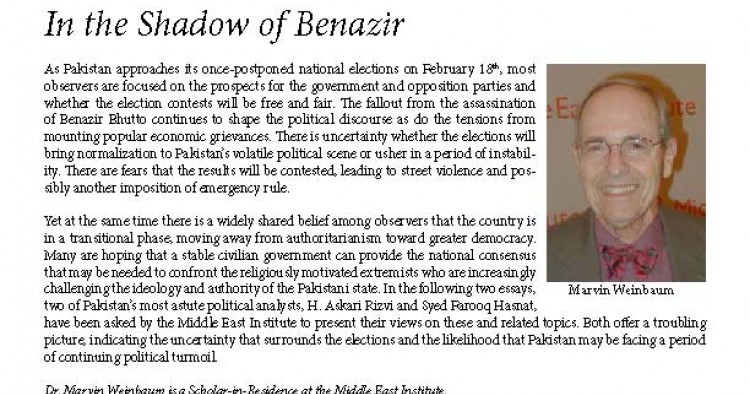 As Pakistan approaches its once-postponed national elections on February 18th, most observers are focused on the prospects for the government and opposition parties and whether the election contests will be free and fair. The fallout from the assassination of Benazir Bhutto continues to shape the political discourse as do the tensions from mounting popular economic grievances. There is uncertainty whether the elections will bring normalization to Pakistan’s volatile political scene or usher in a period of instability. There are fears that the results will be contested, leading to street violence and possibly another imposition of emergency rule.

Yet at the same time there is a widely shared belief among observers that the country is in a transitional phase, moving away from authoritarianism toward greater democracy.  Many are hoping that a stable civilian government can provide the national consensus that may be needed to confront the religiously motivated extremists who are increasingly challenging the ideology and authority of the Pakistani state. In the following two essays, two of Pakistan’s most astute political analysts, H. Askari Rizvi and Syed Farooq Hasnat, have been asked by the Middle East Institute to present their views on these and related topics. Both offer a troubling picture, indicating the uncertainty that surrounds the elections and the likelihood that Pakistan may be facing a period of continuing political turmoil.