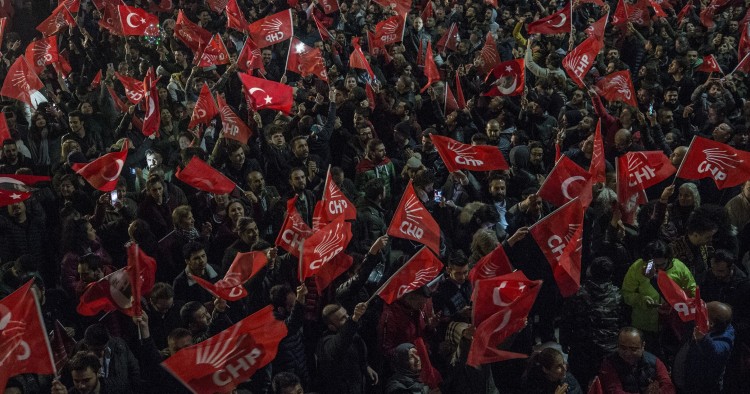 Twenty-five years ago, Turkish Islamists’ march to power began in the country’s capital, Ankara, and its largest city, Istanbul, when the ruling Justice and Development Party’s (AKP) predecessor, the Welfare Party (RP), captured the two municipalities. The loss of these cities in Sunday’s local elections could well mark the beginning of their descent.

Millions of voters cast their ballots on Sunday to elect mayors and local officials amid an economic downturn. President Recep Tayyip Erdogan was not on the ballot himself but he campaigned as if he were. He framed the elections as a matter of “national survival” to deflect attention away from the economy and held up to eight rallies a day, focusing on Istanbul in the final stretch.

But election results suggest his efforts failed to convince voters, who have been feeling the heat as food prices soar and unemployment rises. Erdogan’s ruling AKP suffered major setbacks as the opposition regained control of the country’s biggest cities, including the capital. In Istanbul, the president of the country’s election board put the opposition alliance narrowly in the lead, but AKP officials said they would contest the results, claiming “voting irregularities.”

Losing Ankara, and especially Istanbul, could be the beginning of the end for the AKP’s 17-year rule if Erdogan and his party do not take swift action to tackle the country’s pressing economic problems. President Erdogan knows the risks of losing Istanbul from personal experience. He launched his political career in Istanbul in 1994 when the Islamist RP captured some 200 municipalities across the country and Erdogan became the city’s mayor. He provided social services, especially to the poor and the marginalized, and used clientelist policies to reward his supporters and expand his base. That served as a springboard for his rise to national prominence and later domination of Turkish politics in less than a decade.

Ankara and Istanbul are the economic powerhouses of the country and along with Adana, Antalya, and Izmir, the three other major cities captured by the opposition on Sunday, represent almost 40 percent of Turkey’s population. Losing those cities deals a huge blow to the clientelistic network Erdogan has built over the last 25 years. Through this network, he has ensured the loyalty of the business elite and put their resources to work to consolidate his power. At a time of economic downturn, co-opting those elites might become increasingly difficult.

The loss of Turkey’s major cities has also shattered Erdogan’s image as an invincible politician. Quiet criticism and frustration over his one-man rule and the direction in which he is taking the country have been building up within AKP circles. Every now and then, rumors spread that a new party led by former President Abdullah Gul and other former senior AKP figures is in the making. But in a Turkey where Erdogan keeps winning election after election, they fear a new party led by former AKP figures stands little chance. Sunday’s results might embolden those within AKP circles to finally launch a rival party.

Capturing these cities also provides a golden opportunity for the main opposition Republican People’s Party (CHP) to build a track record in running big municipalities successfully, something Erdogan claims as the AKP’s turf.  On the campaign trail, he often belittles the secularist opposition and the “old Turkey” he claims the opposition represents: a place where garbage piled up on the streets, public hospitals were overrun, and roads were dimly-lit. If the opposition manages to run these cities efficiently and free of corruption and uses the opportunity to connect with the country’s conservative underclass, it may be able to shake off its image as the party of a haughty elite that is out of touch with the people and their everyday problems. The CHP already made inroads into the Anatolian heartland, which has long been in the hands of the AKP, suggesting that with the right candidates it can expand beyond its coastal strongholds and become a truly national party.

The stakes are high for President Erdogan. Sunday’s elections marked the first ballot-box test for him since he became the country’s first executive president with sweeping new powers. He led an aggressive campaign, accusing opposition parties of links to terrorism and blaming inflation on foreign powers seeking to undermine the country. But the electorate sent him a clear message: drop the aggressive rhetoric and deal with the economy. Istanbul will be the test case for whether he received the message or not. The country’s election board put the CHP candidate in a narrow win, but AKP officials are still dragging their feet and have yet to concede. If they don’t, they will not only tarnish their domestic and international legitimacy but also worsen the country’s economic woes. If the AKP accepts defeat and transfers power peacefully, they can refute claims that elections in Erdogan’s “new Turkey” do not matter and assuage growing investor concerns.

What Erdogan and his ruling AKP do in Istanbul in the coming days matters, and Erdogan knows this. After the city voted no in a referendum to switch to an executive presidency in 2017, he warned his supporters: “If we stumble in Istanbul, we lose our footing in Turkey.”