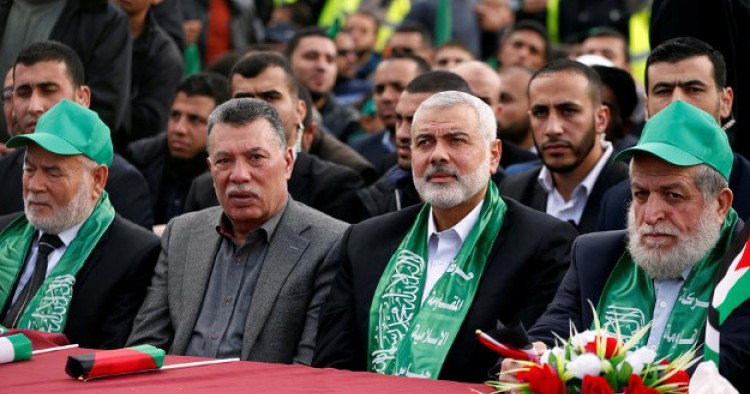 The spokesman for the Palestinian militant group Hamas thanked Iran for its support to the “anti-Israeli resistance front.” In an interview with Tasnim News Agency, which is affiliated with the Iran’s Revolutionary Guards, Mushir al-Masri added that he believes that Iran’s Supreme Leader Ayatollah Ali Khamenei is “at the forefront of support” for the Palestinian cause. Referring to a recent letter by Hamas leader Ismail Haniyeh to Khamenei, al-Masri emphasized that his group wants to further strengthen its ties with Iran, particularly in the wake of US President Donald Trump’s decision to recognize Jerusalem as Israel’s capital. The letter is a note of appreciation of Iran’s support for the “axis of resistance,” he added. Al-Masri also emphasized that the Palestinian National Authority in the West Bank should cease “security cooperation” with Israel.

Comment: In a recent letter to Khamenei, Haniyeh, the political chief of Hamas, had praised Tehran’s support for the militant group, particularly Iran’s “unwavering and valuable” stance on the issue of Jerusalem. According to the Iranian media, Haniyeh denounced Trump’s decision to recognize Jerusalem as Israel’s capital and emphasized in the letter that launching another intifada against Israel would be the best course of action at present. "With the outbreak of the roaring popular Intifada in the West Bank and al-Quds, we will foil with God's permission the conspiracy of the tyrant of the time and the rulers of hypocrisy in the capitals near and far, who want to put an end to the Palestinian issue." He also thanked Khamenei for his guidance to the “resistance movement” and cautioned that Washington’s Jerusalem announcement was part of a broader “conspiracy” to “destroy the pillars of resistance” and pave the way for Israel’s normalization of relations with the Islamic countries in the region.

Two days ago, the representative of the Palestinian Hamas in Lebanon, Ali Barakah, also noted that Haniyeh’s letter is meant to further enhance relations between Hamas and Tehran. “This letter is important as it was sent after the cruel decision by Trump on the transfer of American embassy to Jerusalem, which shows Washington sides with the Zionist regime. The significance of this letter is that it aims to unite the efforts of the Islamic world to fight against the Global Arrogance, which is America, and the regime occupying Jerusalem [Israel]. Today, the Arab and Islamic community should support the intifada and resistance of the Palestine because the fight against Islam and Palestine is an international war,” Barakah added.

Iranian leaders have been trying to exploit Trump’s decision to recognize Jerusalem as Israel’s capital to further strengthen Tehran’s ties with the Palestinian militant groups. Soon after Trump’s announcement, both President Hassan Rouhani and Quds Force Commander Qassem Soleimani called leaders of Hamas and other Palestinian militant groups to pledge Iran’s “all-out support” for their struggle against Israel. “We are confident that a new intifada will continue its path to attain the rights of the Palestinian nation,” Rouhani told Haniyeh over the phone, according to the Iranian media. Meanwhile, Soleimani told the leadership of the Palestinian Islamic Jihad and Izz ad-Din al-Qassam Brigades that other groups within the “resistance axis in the region” are also ready to defend the al-Aqsa mosque in Jerusalem.

Tehran also hopes that Washington’s decision to unilaterally declare Jerusalem as Israel’s capital would help Iran’s efforts, as one analyst wrote in IRGC-affiliated Tasnim News Agency, to further strengthen the “resistance front” in the region against the United States and Israel.