Iran and Russia: A tale of unfulfilled economic potential 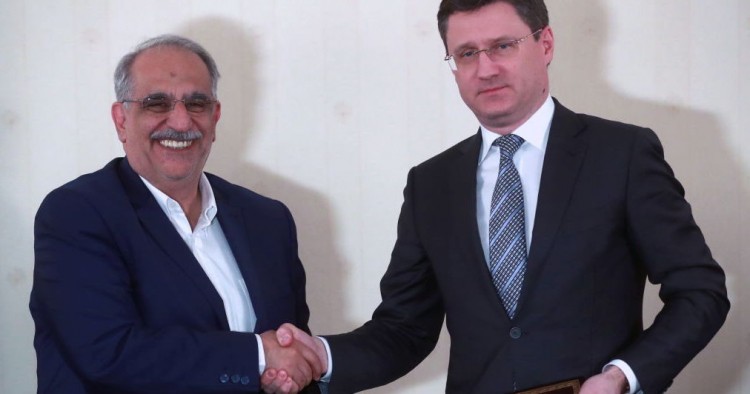 The outbreak of a Russian-Saudi oil price war earlier this month might offer some comfort to Iran, a country which has in recent years become unnerved by the increasingly close ties between Moscow and Riyadh. However, it is premature to see an Iranian geopolitical win emerging from the Russian-Saudi spat, and history should give Tehran plenty of reservations about Moscow’s ability to deliver on its economic promises to Iran.

With Iran and Russia both large exporters of oil and natural gas, closer economic cooperation would invariably involve the energy sector. And given the size of their economies, the entire Caucasus and Central Asia region will feel the impact should Russia-Iranian relations tilt one way or another. Iran and Russia will likely continue to pay lip-service to the idea of an economic partnership, but each side will remain preoccupied with larger concerns. This is a tale of unfulfilled economic potential.

The short-term impact of the oil price war

Iran and Russia held a round of talks on coordinating oil policies prior to the OPEC meeting in early March. At the same time, the U.S. and the UK were reported to have doubled crude oil purchases from Russia, which Moscow claims was a result of U.S. sanctions on Iran and Venezuela. Meanwhile, there is no evidence that Iranian Oil Minister Bijan Zanganeh was in any way able to shape Russia’s decision at the OPEC+ meeting.

With Tehran previously advocating for an oil production cut by OPEC and Moscow, Russia’s decision to abandon cuts was a net loss for the Iranian position. Tehran should not have been surprised though. Moscow is engaged in a separate and much larger competition for global market share against Saudi Arabia and American shale oil exporters. Iran was never a factor in Moscow’s decision, and it was no surprise to hear Zanganeh call the OPEC meeting “the worst” he had ever attended.

Following the imposition of sanctions by the U.S. at the end of 2018, Iran’s oil exports have plummeted from around 2.5 million barrels a day in April 2018 to an estimated 250,000. And with the Russian-Saudi oil price war, Tehran will now find it even more difficult to sell the remaining oil it can produce as oil exporters are forced to offer steep discounts. No other country needs to jump over American sanctions like Iran and few will envy Tehran’s position today given it was once a mighty global oil player.

Separately, state-owned company Russian Railways recently pulled out of $1.3 billion rail project in Iran, which was to be 85 percent financed by the Russians. The project was to connect Turkey via Iran to Turkmenistan and Kazakhstan and would require electrifying an existing railway line between Garmsar in Iran and Inceburun in Turkey. Russian Railways cited U.S. sanctions as the reason for pulling out, which may well be true.

Still, Russian Railways is not the only Russian company to halt projects in Iran, and the Kremlin is doing little to encourage Russian companies to invest there. This is indicative of Moscow’s long-term economic plans for Iran, or rather lack thereof.

All of this is not what the Iranians had hoped to see. Russian companies signed many billions of dollars in contracts in Iran following the 2015 nuclear agreement, none of which have been realized. Paradoxically, Russian Railways’ decision to walk away was made as Moscow continued to emphasize Iran as a land-bridge between South Asia and Europe. Both Moscow and Tehran only recently pledged to establish transport links through Iran to the Caucasus and Russia to ensure cheaper and more efficient options for Europe-Asia trade.

When Iranian President Hassan Rouhani met with Russian President Vladimir Putin in September 2019, the two leaders discussed ways to increase economic cooperation. As Rouhani wanted to present it, “with the political will of the two governments, the relations between Iran and Russia are now closer and more sincere than ever before.” This might be the case on a limited, tactical level — such as joint efforts to keep Bashar al-Assad’s regime in Syria alive — but rhetoric from both sides has so far fallen short in advancing the idea of an economic partnership. One needs only to look at the energy sector, where for a long time Moscow and Tehran promised grand projects but nothing ever came to pass.

The energy vision that never was

Slow progress cannot be attributed to a lack of creative thinking. Consider Iran’s ambitions to join the Russian-led Eurasian Economic Union, the oil-for-goods barter agreements to trade in ruble and rial rather than the dollar, or the direct financial transfer mechanism established between Iranian and Russian banks. Even without U.S. sanctions, there would still be an issue of structural economic incompatibility between Russia and Iran. Both are energy exporting countries, so the idea that Russia would be the major beneficiary of American sanctions on Iran has simply not panned out. The one exception here is Russia benefiting by absorbing the oil market share lost by Iran due to U.S. sanctions.

Iranian authorities had hoped that trade in energy, such as the export of natural gas, would encourage further economic cooperation and integration with energy-importing neighboring states like Armenia, Turkey, and Pakistan. In November 2017, a few months before the Trump administration re-imposed sanctions on Iran and Washington abandoned the 2015 nuclear deal, Tehran and Moscow signed a $30 billion “strategic” cooperation agreement in the energy sector.

Iran and Russia wanted to pull the rest of the region, including the Caucasus and Central Asia, into this promised giant energy venture. This included energy exporters Azerbaijan, Kazakhstan, and Turkmenistan and energy importers Armenia and Turkey. Russian Energy Minister Alexander Novak, who has morphed into the chief envoy of President Putin to Tehran, spoke of an agreed economic package of projects worth “$35 to $40 billion.”

When Rosneft CEO Igor Sechin visited Tehran in November 2017, he spoke with National Iranian Oil Company (NIOC) executives about a swap mechanism. Russian oil and gas and derivatives would be delivered to Iran at Caspian Sea facilities while the NIOC would deliver to Russia’s customers from its export terminals in the Persian Gulf. Sechin — viewed by many Iranians as President Putin’s right-hand man — used his visit to focus on cooperation in the upstream sector. At the same time, Russia’s Lukoil and Zarubezhneft were busily assessing the Iranian market while bidding for projects. Visits by Russia’s top oilmen to Tehran between 2016 and 2018 reflected Moscow’s ambitions to maintain economic influence in the Iranian economy once sanctions are lifted.

The energy sector is a sensitive policy area. This is particularly the case with upstream investments and the issue of foreign ownership of oil and gas fields, which is constitutionally forbidden in Iran. And yet, energy remains both a priority for Tehran and a field where Russia is best placed to compete with Western players like Shell and Total. Among the key political factions in Tehran, hardline allies of Supreme Leader Ayatollah Ali Khamenei see greater Russian participation in the Iranian economy as a way to check President Rouhani’s Western-centric foreign investment agenda.

Many frustrated Iranians believe Russia was too quick to pull out of Iran after the Trump administration re-imposed sanctions in November 2018. In a sense, Iranian disappointment in Russia’s lack of commitment to a closer economic partnership also reflects a lost opportunity to pursue long-term, pan-regional economic integration with neighboring states to the north.

In recent years, Iran has been following the same basic strategy of attracting long-term foreign investment in key projects that are difficult and costly to reverse. The aim is to give foreign partners like Russia a stake in Iran’s return to the global political and economic mainstream while making it difficult for the West, particularly the U.S., to isolate Iran in the future.

One example of this strategy was Iran’s willingness to consider a proposal by the Hyundai Development Company Group to invest in the port of Anzali on the Caspian Sea. The port is Iran’s largest in the north and a key maritime route for trade with Russia and the Central Asian states. The South Koreans would not only offer finance and knowledge in developing the port, they would be investing in a project that offered them important access to the landlocked region of Central Asia.

The Rouhani government had hoped that projects of this nature would not only generate political support for Tehran in foreign capitals, but also help Iran work toward its ambition of becoming a key hub for trade between East Asia and Central Asia. On paper this all sounded good but what Tehran has repeatedly found out — often the hard way — is that companies in Russia, as well as those in the Caucasus, Central Asia, or Turkey, must consider the possibility of breaching U.S. sanctions on Iran. This makes them hesitant to engage with Iran while it is still resolving its differences with Washington.

Alex Vatanka is a Senior Fellow at the Middle East Institute and Director of the Iran Program. The views expressed in this article are his own.