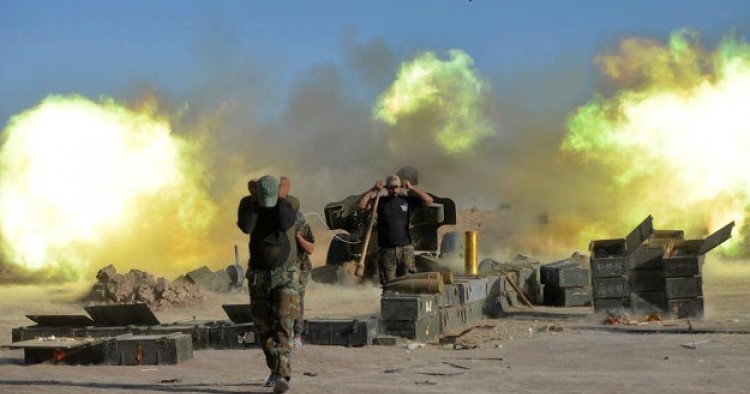 A senior commander of the Iraqi Popular Mobilization Force (P.M.F.) has announced that forces from al-Hashd al-Turkmani will play a major role in the military operation to liberate the city of Tal Afar from the Islamic State, Iran’s Fars News Agency reported today. Abu Mahdi al-Muhandis, the chief operational commander and deputy head of the P.M.F., made the statement after meeting with the leaders of Hashd al-Turkmani, a P.M.F. unit close to Iran and strongly anti-American. Muhandis discussed operational details, including a plan to simultaneously enter Tal Afar from all fronts, with Hashd al-Turkmani commanders at the Iraqi Joint Operations Command (JOC) headquarters. According to the report, P.M.F. forces also made significant advances against Islamic State positions in southern parts of Tal Afar on Wednesday.

Comment: On Sunday, Iraqi Prime Minister Haider al-Abadi announced the launch of an offensive to retake Tal Afar, a predominantly Turkmen city about 40 miles west of Mosul. The city is strategically important as it lies on a supply line between Mosul and Syria.

P.M.F. commanders say their paramilitary forces are actively participating in the operation. The Badr Organization, another powerful Iranian-supported P.M.F. group, announced on Sunday that its forces have captured “mountainous regions” in northwestern parts of Tal Afar. A report in Fars News Agency, which is affiliated with the Islamic Revolution Guards Corps, said P.M.F. forces in cooperation with the Iraqi Federal Police recaptured four regions in Tal Afar on the first day of the operation. P.M.F. Spokesman Ahmed al-Assadi also reiterated that the paramilitary forces closely coordinate their operations with the Iraqi security forces. Assadi had previously revealed that as many as 20,000 P.M.F. fighters are expected to participate in the Tal Afar operation.

Akram al-Kaabi, the leader of Iranian-backed P.M.F. group called Harakat al-Nujaba, also boasted about the paramilitary forces’ participation in the operation. “Despite international pressures – particularly by America, Turkey and Saudi Arabia – Hashd al-Shaabi [P.M.F.] will play an extensive role in the operation to liberate Tal Afar,” he was quoted by Fars News Agency as saying.

Tal Afar has been a major Islamic State stronghold since 2014. Once inhabited by both Sunnis and Shiites, the population in the Turkmen-majority city is now largely Sunni.

The participation of P.M.F. – which are dominated by Shiite groups supported by Iran – in Tal Afar operation has been a matter of concern for Iraqi Sunnis and regional Sunni leaders, who have repeatedly expressed the worry that Iran-backed sectarian groups may engage in revenge killings against Tal Afar’s Sunni inhabitants once the Islamic State is ousted. Turkey, in particular, has warned that it would not remain silent to the P.M.F.’s advances into Tal Afar – although Ankara has recently toned down its criticism of the role of Iran and its proxies in Iraq.

The P.M.F.’s potential participation in Tal Afar operation may have serious implications for post-Islamic State stabilization efforts in Iraq as well, as the city could yet again turn into a dangerous flashpoint for sectarian violence and proxy wars between regional countries.

Furthermore, with the Islamic State on the verge of collapse in Iraq, Iranian-supported P.M.F. groups have launched a vicious propaganda campaign against the U.S. and its regional allies – posing security risks to U.S. military advisers that are helping the Iraqi security forces in the country. “Abu Bakr al-Baghdadi is a protégé of America. His actions and movements are supervised by this country’s [U.S.] intelligence service,” Ali al-Husseini, who is a commander of al-Hashd al-Turkmani, said an exclusive interview with I.R.G.C.-affiliated Tasnim News Agency. “Al-Baghdadi is an American puppet, and this is undeniable. I believe Americans know where he is but they hide him,” he continued. The militia leader further alleged that American forces in Iraq were trying to transfer Islamic State fighters from Iraq to Syria and Libya.

Ironically, al-Turkmani’s forces in the ongoing Tal Afar operation is indirectly supported by the U.S.-led coalition.