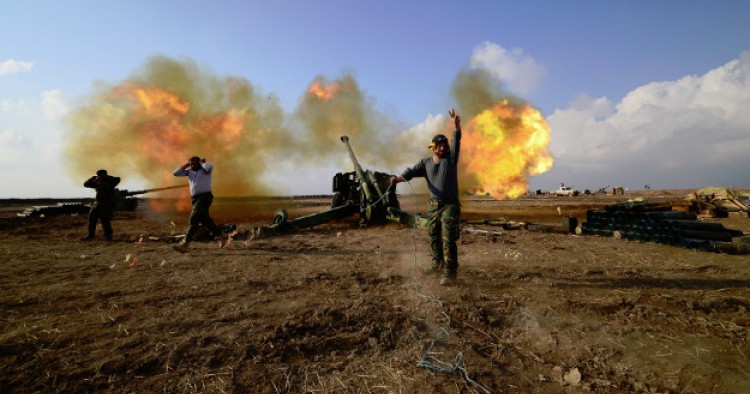 Fars News Agency (FNA) reports today that Iran-supported Iraqi Shiite militia group Harakat al-Nujaba commemorated the “martyrdom” anniversary of Hezbollah’s former military leader Imad Mughniyeh by firing missiles at Islamic State targets in northern regions of Iraq’s Salahuddin Province. According to FNA, an outlet affiliated with the Islamic Revolution Guards Corps (I.R.G.C.), the Shiite militia group launched an offensive dubbed “Operations for the Blood of Martyred Commander Imad Mughniyeh” to “liberate” the Islamic State-held region of Jabal Makhul (Makhul Mountains) in Salahuddin. “It is worth mentioning that the security of the region ‘Jabal Makhul,’ after the end of the operations to clear and liberate Baiji, has been assigned to the Islamic resistance movement of Nujaba,” the report added.

Comment: Harakat al-Nujaba is a notorious, sectarian Iraqi militia group that operates under the leadership of I.R.G.C. Quds Force commander Qassem Soleimani. The leader of the group, Akram al-Kaabi, makes no secret of his allegiance to Iran’s Supreme Leader Ali Khamenei or his close relationship with Soleimani. The I.R.G.C. uses the Nujaba group and other powerful Shiite units within Iraq’s Popular Mobilization Forces (PMF) not just to fight the Islamic State, but also as a pressure tool against the Baghdad government, regional Sunni states and the United States. Kaabi once famously stated that his forces would oust the Baghdad government if ordered by Khamenei. Unlike some other PMF units that receive their political and religious guidance from Iraq's top cleric Grand Ayatollah Ali Sistani, Kaabi has repeatedly made it clear that he only emulates Khamenei. Kaabi has recently declared that his forces will leave Iraq for Syria to fight alongside the I.R.G.C. forces and Syrian Army once the Islamic State is defeated in Mosul. The Nujaba group also has close operational links with the Lebanese Hezbollah in Syria.

Recently, Tehran has further strengthened its ties with the Nujaba group. Earlier this month, FNA reported that Supreme Leader Ali Khamenei’s representative to Iraq, Sayyed Mojtaba Hosseini, held a meeting with Kaabi in Iraq to discuss Iraqi and regional issues. The meeting was perhaps also an implicit warning to the Trump administration that the I.R.G.C. and its militia proxies would threaten U.S. interests in Iraq and in the broader region if Washington escalated the ongoing tension with Tehran over the latter’s controversial missile activity and support for terrorism. Recently the Nujaba group also test-fired sophisticated missiles to project power.