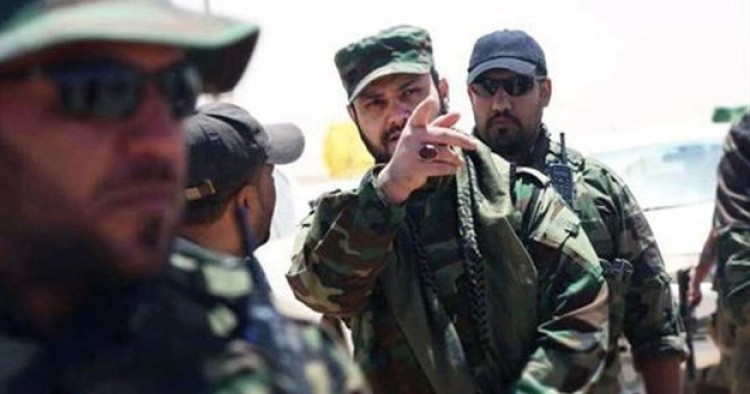 An Iraqi militia group today accused the Kurdish peshmerga forces of having “occupied” the province of Kirkuk and stressed that his forces are ready to “liberate disputed regions” in Iraq. “The Iraqi government should act with determination to liberate Kirkuk from separatist paramilitaries before it is too late,” Harakat al-Nujaba, an Iranian-sponsored group fighting in Iraq and Syria, said in a statement as Iraqi Kurds were casting their ballots for an independence referendum. Hashim al-Mousavi, the group’s spokesperson, further emphasized that the Iraqi forces should particularly focus on recapturing oil-rich regions within Kirkuk and not allow the Kurds to “steal Iraqis’ national wealth.” He said P.M.F. paramilitary forces are waiting for an order from the Baghdad government to seize Kirkuk. Harakat al-Nujaba yesterday had called on Iraqi Prime Minister Haider al-Abadi to declare an emergency situation in Kirkuk.

Comment: Tension between Kurdish peshmerga forces and Iran-backed paramilitary groups is escalating rapidly as Erbil went ahead with the independence referendum vote today despite strong opposition from Baghdad and Tehran. As the statement by Harakat al-Nujaba indicates, Kirkuk may prove a dangerous flashpoint between Shiite PMF groups and Kurdish forces that control the region.

Since Islamic State fighters drove out Iraqi security forces from Kirkuk three years ago, Kurdish peshmerga fighters have recaptured and controlled the oil-rich province. The K.R.G. conducted the referendum vote in Kirkuk against Baghdad’s wishes.

Last week, Qais al-Khazali, the leader of another Iran-backed Iraqi militia group Asa’ib Ahl al-Haq, accused the K.R.G. of executing an “Israeli project” by dividing Iraq and warned that his forces would not allow it to happen. "The enemies of Imam Hussein raised the flag of the homosexuals in Erbil at the wishes of the Israelis," he said in a speech to his followers. "Today while we celebrate by raising the banner of Imam Hussein in the south, there are those who raise the banner of his enemies in Erbil," he added. Denouncing the K.R.G.’s plan to hold an independence referendum, Khazali stressed that the project will not succeed. "The second state of Israel will not be obtained as long as Imam Hussein, peace be upon Him, lives in the conscience of every Iraqi."

Hadi al-Amiri, the head of Iranian-supported Badr Organization, echoed a similar threat. “If tension over the Iraqi Kurdistan’s referendum continues, it will certainly culminate in civil war” he was quoted as saying by Iran’s Fars News Agency. “Unfortunately, when the civil war breaks out, blood will be shed,” he added.

Another potential flashpoint could be Sinjar in the northwest. Iranian-backed Iraqi militia groups have warned that they would not allow any parts of Nineveh Province to be incorporated into the Iraqi Kurdistan Region. A senior official of Asa’ib Ahl al-Haq had earlier threatened violence against the leadership of the Iraqi Kurdistan, according to Fars News Agency. Adnan Faihan, the head of the group’s political office, warned Barzani against “marking the border with blood” and said his militia forces are ready to confront him if the Kurdish leader “tries to impose his will on disputed regions.”

Harakat al-Nujaba – also known as Harakat Hezbollah al-Nujaba – is a prominent P.M.F. unit operating both in Syria and Iraq under the leadership of Qassem Soleimani, the head of the I.R.G.C. Quds Force. The leader of the group, Akram al-Kaabi, makes no secret of his allegiance to Iran’s Supreme Leader Ali Khamenei or his close relationship with Soleimani. The I.R.G.C. uses the Nujaba group and other powerful Shiite units within the P.M.F. not just to fight the Islamic State, but also as a pressure tool against the Baghdad government, regional Sunni states and Israel, and the United States. Kaabi once famously stated that his forces would topple the Baghdad government if ordered by Khamenei. Kaabi has also declared that he will deploy more forces to Syria once the Islamic State is defeated in Mosul.

Asaib Ahl al-Haq – or the League of the Reighteous – is another Iraqi Shiite militant group fighting in Iraq and Syria. The group is funded by the Iran and reportedly has more than 10,000 fighters. According to the U.S. government accounts, the Lebanese Hezbollah upon a request by the Iranian government helped form and train AAH in 2005 to carry out attacks against the U.S.-led coalition forces in Iraq. AAH started as a splinter group of the Mahdi Army, the powerful Shiite Iraqi paramilitary force led by Moqtada al-Sadr. AAH has been accused of killing American soldiers and committing human rights abuses against Iraqi Sunnis.

Khazali has reportedly pledged allegiance to Iran’s Supreme Leader Ali Khamenei, and his group takes orders from Soleimani, rather than the government in Baghdad.