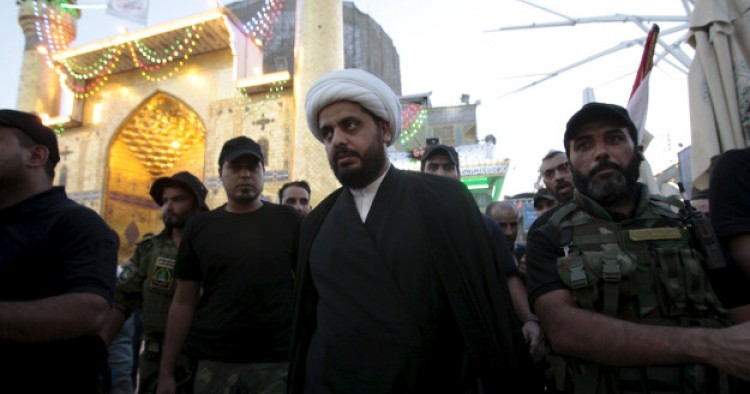 The spokesman of Asa’ib Ahl al-Haq (AAH), an Iraqi militia group with close ties with Iran’s Revolutionary Guards and the Lebanese Hezbollah, described the US presence in Iraq as “illegal” and called for the withdrawal of American troops from the country. His remarks were the latest in a series of similar statements against the US presence in Iraq by Iranian-backed groups in recent months. “After the victory over Daesh [ISIS], the presence of American troops has no justification and is in violation of the country’s constitution,” Iran’s Fars News Agency quoted AAH Spokesman Laith al-Adthari as saying in an interview with an Iraqi outlet. “America’s presence in the Iraqi territory is an act of aggression against the sovereignty of this country and the will of the Iraqi people,” he claimed. The militia commander said “resistance groups” managed to “expel” American troops from Iraq in 2011, and have “legitimate reasons to confront any foreign presence” now. He also cautioned that no political parties in Iraq should make a case for the continuation of US presence in Iraq that would violate the constitution and latest decisions by the country’s parliament.

Comment: With ISIS defeated and Iraqi parliamentary elections on the horizon, Iranian-backed militia commanders and politicians in Iraq have ramped up calls for the withdrawal of American troops from the country. Several units within Iraq’s Popular Mobilization Force (PMF) – such as the Iraqi Hezbollah, Harakat al-Nujaba and the Badr Organization – have increased pressure on Prime Minister Haider al-Abadi to “expel” American troops and have also threatened violence if Washington decides to keep its forces in the country.  Kata’ib Hezbollah, also known as Kata’ib Hezbollah, last month issued a statement warning that its fighters will begin to militarily confront American troops “at any moment.” The Nujaba group warned that American troops in the region are “legitimate” targets after the Trump administration declared Jerusalem as Israel’s capital.

On March 1, the Iraqi parliament also called on the government to set up a timeline for the exit of foreign troops that have helping the Iraqi security forces in the fight against ISIS. The vote was organized by the Shiite ruling coalition in the parliament. With the May 12 parliamentary elections nearing, Iran-backed Iraqi militia leaders and politicians have made the issue of US withdrawal a key election theme. By promising to expel all foreign forces from the country, these groups want to win the votes of nationalists, and they also put pressure on the Baghdad government.

Recently, Tehran and its allies in Iraq have also set their sight on the upcoming Iraqi parliamentary elections slated for May 12. Several prominent Iranian-backed Shiite PMF groups have formed the Fatah Alliance to compete in the elections. Hadi al-Amiri, the head of the Badr Organization, is head of the new coalition which also includes other Iranian-supported groups such as Asa’ib Ahl al-Haq and the Iraqi Hezbollah.