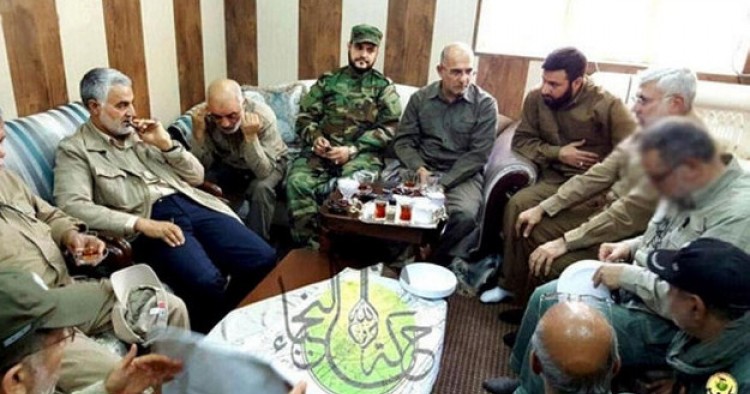 The chief commander of Iraq’s Popular Mobilization Units has said that the paramilitary forces are ready to go to Syria to fight ISIS and defend Iraq’s borders, Iranian and Lebanese media reported. Abu Mahdi al-Muhandis, the deputy chairman of Hashd al-Shaabi (PMUs), further stressed that his forces will “respond forcefully” to any potential ISIS attack originating from Syria. “We cannot remain passive vis-à-vis the Syrian-Iraqi border and attacks carried out by Daesh [ISIS] in Syria,” he added. The Iran-backed militia commander, who is blacklisted by the US government, also expressed a willingness to send his forces to Syria to help with the fight against ISIS. “If [Prime Minister] Haider al-Abadi issues an order, Hashd al-Shaabi is ready to enter the Syrian territory with the aim of defending Iraq’s borders,” he added.

Comment: Since PMU is legally a branch of Iraq’s security forces, its leaders often say that the paramilitary forces will fight in Syria only if it is ordered by Abadi, who is also the commander-in-chief of the Iraqi armed forces. But not all PMU commanders obey the central government. Indeed, groups such as Asa’ib Ahl al-Haq and Harakat al-Nuaba take their orders from Tehran rather than Baghdad. Without Abadi’s permission, several Iran-sponsored PMU units have been fighting to prop up the embattled regime of Bashar al-Assad for years. Recently, it was Tehran-supported Iraqi militia groups that crossed the border in Syria and helped the pro-Syrian regime forces to capture Abu Kamal – a strategic border town in eastern Syria that Iran needs for its “land corridor” to the eastern Mediterranean.

Muhandis himself is more loyal to Tehran than Baghdad. Last April, he said he took a pride in being a “soldier” of Iranian Quds Force Commander Qassem Soleimani, calling it “a blessing from God.” In a documentary aired on the Iranian state-run Ofoq television channel, Muhandis, reiterated his allegiance to Khamenei and the principle of the “Islamic jurisprudence.” He further explained that he fights for Iran because the Islamic Republic is the “mother of the Islamic community” and “our Mecca.”

According to U.S. government accounts, Muhandis participated in the bombing of Western embassies in Kuwait and plotted assassination of the Emir of Kuwait in the early 1980s. He has been convicted in absentia by the Kuwaiti government.

Under Soleimani’s supervision in 2007, he formed a group called Kata’ib Hezbollah – also known as the Hezbollah Brigades or the Iraqi Hezbollah – and employed Lebanese Hezbollah experts to train and prepare his militiamen in guerilla warfare to attack coalition troops in Iraq. Kata’ib Hezbollah now functions under the P.M.F. umbrella. Muhandis also reportedly played an instrumental role in smuggling weapons from Iran into Iraq and distributing them to anti-coalition terrorist groups.