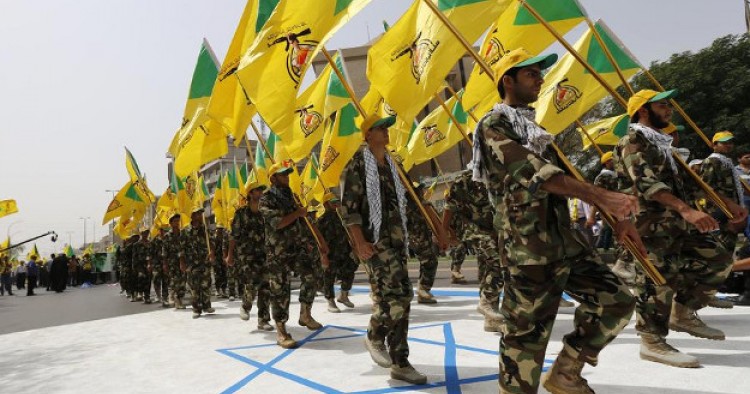 With ISIS militarily defeated, Iran’s militia allies in Iraq are increasingly threatening violence against American troops and calling for the US withdrawal from the country. On February 7, Kata’ib Hezbollah, an Iranian-supported unit within Iraq’s Popular Mobilization Force (PMF), issued a statement, warning that its fighters will begin to militarily confront American troops “at any moment” if Washington decides to keep a long-term military footprint in Iraq. Several other Iranian-backed PMF groups have made similar threats against US troops, which are training and advising the Iraqi security forces.

In an interview with the Lebanese al-Mayadeen TV yesterday, Jafar al-Hussaini, the spokesman for Kata’ib Hezbollah, described the American military in Iraq as an “occupation force” and called for their immediate exit. “Iraq will not see stability with America’s presence. The Americans have not entered Iraq based on the Iraqi government’s consent. Our combatants have limited weapons but a confrontation with the American forces may begin at any moment. Unlike in the past, the Americans this time will not benefit from any mediation.” He also accused Washington of creating ISIS in order to redeploy troops to Iraq and justify its presence in the Arab country. “An assessment of equipment, contacts and communications of ISIS in Tikrit indicated that ISIS terrorists were only in touch with the Americans,” he alleged. He further emphasized that Iraq does not need the US military to train and assist its security forces now that ISIS has collapsed.

On Monday, Saad al-Hadithi, the spokesman for the Iraqi government, confirmed media reports that the American forces in Iraq have begun to draw down and to transfer personnel and equipment to Afghanistan. A Statement by the Iraqi Hezbollah, however, urged the government of Haider al-Abadi not to fall into America’s “trap” and claimed that Washington is working to formalize its long-term presence in Iraq – which the group said will not accept. The statement referred to Pentagon Spokesman Eric Pahon’s Monday remarks that the US is not “signaling any significant drawdown in Iraq at this time.”

Several other Iranian-linked Iraqi groups have recently echoed similar threats against the American forces in Iraq. "The two governments should co-ordinate to ensure a full withdrawal. US presence will be cause for internal polarisation and a magnet for terrorists," said Kareem Nuri, the spokesman for the powerful Badr Organization, which has close ties with Iran’s Quds Force and controls Iraq’s Interior Ministry.

In December, Asa’ib Ahl al-Haq and Harakat al-Nujaba – two other Iranian-sponsored PMF units that fight both in Iraq and Syria – also threatened violence against the United States in Iraq and the broader region after a US congressional bill called for their designation as terrorist organizations. The Nujaba group also warned that American troops in the region are “legitimate” targets after the Trump administration declared Jerusalem as Israel’s capital. “Trump’s foolish decision to make Jerusalem the Zionist capital will spark a major uprising to excise this entity (Israel) from the body of the Islamic nation, and is a legitimate justification to target American troops,” said Akram al-Kaabi, the group’s leader, according to a statement published on Nujaba’s website.

Expelling US forces from Iraq

In addition to threats of violence by Iranian-led militia groups in Iraq, Tehran and its allies have been pressuring the Baghdad government to set a withdrawal date for the American troops. Last year, Supreme Leader Ali Khamenei said Iran opposed the presence of American forces in Iraq and urged the Iraqi prime minister not to rely on Washington. “Do not trust the Americans under any circumstances because they are waiting for an opportunity to do harm,” the supreme leader told Abadi at a meeting in Tehran. Khamenei accused the United States of sowing discord in Iraq for its geopolitical interests and added: “They should not be given this opportunity. Also, the deployment of American forces to Iraq under the pretext of training and other matters should be avoided.” The top Iranian leader also voiced support for PMF and cautioned the Iraqi prime minister not to listen to American advice on weakening or disbanding the force after the defeat of the Islamic State.

Recently, Tehran and its allies in Iraq have also set their sight on the upcoming Iraqi parliamentary elections slated for May 12. Several prominent Iranian-backed Shiite PMF groups have formed the Fatah Alliance to compete in the elections. Hadi al-Amiri, the head of the Badr Organization, is head of the new coalition which also includes other Iranian-supported groups such as Asa’ib Ahl al-Haq and the Iraqi Hezbollah. Iraqi politicians close to Tehran have also dialed up anti-American remarks.