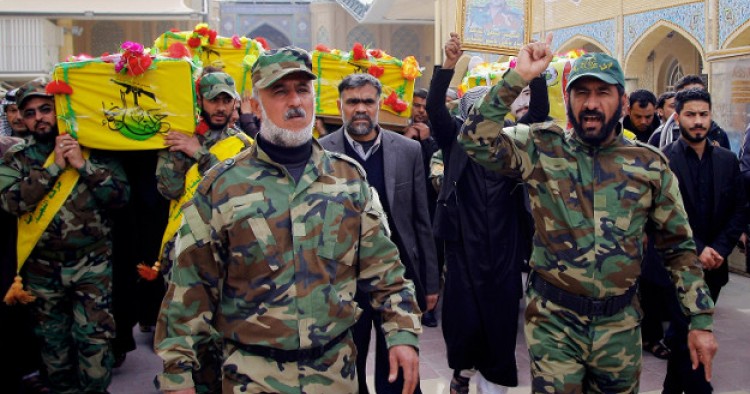 Over the past six years, Iran has played a key role in propping up the embattled regime of Bashar al-Assad in Syria, by sending Islamic Revolution Guards Corps (I.R.G.C.) military personnel as well as recruiting, funding, training and leading an extensive network of Iraqi, Lebanese, Pakistani and Afghan Shiite militia forces. Now that Iran’s ally in Damascus is in control of Syria’s key population centers, the Islamic Republic and its regional proxies are already planning to consolidate their presence in Syria for the long haul to secure Tehran’s geopolitical interests in the broader region. This has alarmed the United States and regional countries – particularly Israel, which is increasingly worried about the presence and influence of the Lebanese Hezbollah and other Iran-backed forces along its northern border with Syria. One prominent Iran-controlled militia group, for example, announced earlier this month that it had created a new brigade of well-trained combatants to fight Israel and reclaim the strategic Golan Heights from the Jewish state.

On March 29, Harakat al-Nujaba, an Iraqi militia group that fights under the I.R.G.C.’s leadership in both Iraq and Syria, said that Israel, not Sunni militants, is the real enemy and sought Damascus’s permission to fight Israeli forces stationed in the Golan region. “The Golan Liberation Brigade will fight shoulder to shoulder with its brothers in the Syrian Army. The axis of resistance is working on the main goal, which is the Palestinian issue. And these efforts have a great impact on reshaping the regional map by annihilating the occupying Zionist regime,” Nasr al-Shammari, the Nujaba’s deputy military chief said in an interview with Iran’s Mehr News Agency. “The weapons of the resistance and Islamic and Arab armies should target this regime. With this in mind, the Harakat al-Nujaba announced that a brigade should be set up to liberate Golan,” he added. “If this regime is destroyed, regional problems will be resolved completely.”

Shammari also claimed that Shiite militia groups forced the “occupying” U.S. forces to withdraw from Iraq and are able to replicate that success against Israel. “We are waiting to confront the Zionist regime instead of combating Takfiri groups in the region and their evil arms.”

The Nujaba movement announced three weeks ago that it had established a new brigade to seize the Golan Heights – claiming that “latest victories” against the Islamic State and Sunni rebels in Iraq and Syria have allowed the group and its allies to focus on Israel. Leaders of the group claimed that members of the new brigade are highly-trained, well-equipped and capable of fighting the Jewish state. “Israel is weaker than a spider web. Islamic resistance is capable of confronting the axis of evil and annihilating the occupying Zionist regime,” Nujaba’s Secretary-General Akram al-Kaabi told Lebanon-based Arabic-language al-Mayadeen news network.

The creation of the Golan Liberation Brigade further alarmed Israeli leaders about the increasing presence and influence of the Lebanese Hezbollah and other I.R.G.C.-supported groups in southwestern Syria. Israeli Prime Minister Benjamin Netanyahu during his recent trip to Moscow sought assurances from Russian President Vladimir Putin to prevent Iran from taking advantage of the conflict in Syria to station its proxies permanently on Israel’s northern border. “I made it clear to President Putin our resolute opposition to the consolidation of Iran and its proxies in Syria,” he told reporters after the meeting. “We see Iran trying to build a military force, military infrastructure, with the intention to be based in Syria, including the attempt by Iran to build a seaport. All this has serious implications in terms of Israel’s security.”

Given Israel’s military superiority in the region, Iranian proxies cannot seize the strategic Golan region. Also, the regime of Bashar al-Assad is still fighting for its survival against a wide range of Sunni rebel groups and is unlikely to engage in a self-defeating war with Israel. But Israeli leaders are worried that Iran and its proxies are expanding the Southern Lebanon front to the Golan Heights – threatening Israel’s security and stability. The fact that Iranian-sponsored Iraqi militia groups and the Afghan Fatemiyoun Division fighting in Syria have close operational links with Hezbollah, has added to Israeli concerns. Moreover, senior I.R.G.C. commanders have recently visited the Syrian-controlled regions of the Golan Heights on military and reconnaissance missions.

I.R.G.C. commanders have talked about helping Damascus reclaim the Golan region from Israel for almost three decades. Last year, Brigadier General Ali Asghar Gorjizadeh, a senior I.R.G.C. commander and a veteran of the Iran-Iraq war, claimed that the Syrian government had refused Tehran’s offer in the 1980s to send an I.R.G.C. battalion to help the Syrian Army to “liberate” the Golan Heights. But he explained that the I.R.G.C. has, over the past decades, used the Syrian territory to train anti-Israel “resistance forces,” particularly the Lebanese Hezbollah. And now that the six-year Syrian civil war has allowed the I.R.G.C. to gain a significant military footprint inside Syria, it is no surprise that the I.R.G.C. will seek to use its powerful Shiite proxies such as the Nujaba group to threaten the Israeli security.

The remarks by Nujaba leaders also indicate that the mission of Iran-sponsored Shiite militia groups will not remain limited to Iraq and Syria. Nor will the group only threaten the security of Israel in the future. I.R.G.C.-affiliated militia commanders in Iraq, for example, have already turned attention to their Iraqi rivals as the Islamic State is on the verge of collapse in Mosul. They have also made threats against regional Sunni states, particularly Saudi Arabia. Recent reports also suggest that the I.R.G.C. and Hezbollah are increasingly training and deploying Afghan and Arab Shiite militiamen to support Houthi rebels in Yemen. Iraqi Popular Mobilization (P.M.F) units with close ties with Iran have also stepped up anti-American propaganda in Mosul and across Iraq – posing threat to the safety of American military advisers that are helping the Iraqi security forces on the ground.

Harakat al-Nujaba – also known as Harakat Hezbollah al-Nujaba – is a prominent Iraqi sectarian group that operates under the leadership of I.R.G.C. Quds Force commander Qassem Soleimani. It has been fighting in Syria since 2013. The leader of the group, Akram al-Kaabi, makes no secret of his allegiance to Iran’s Supreme Leader Ali Khamenei or his close relationship with Soleimani. The I.R.G.C. uses the Nujaba group and other powerful Shiite units within Iraq’s Popular Mobilization Forces (P.M.F.) not just to fight the Islamic State, but also as a pressure tool against the Baghdad government, regional Sunni states, and the United States. Kaabi once famously stated that his forces would topple the Baghdad government if ordered by Khamenei. Unlike some other P.M.F. units that receive their political and religious guidance from Iraq's top cleric Grand Ayatollah Ali Sistani, Kaabi has repeatedly made it clear that he only emulates Khamenei. Kaabi has recently declared that he will deploy more forces Syria to fight alongside the I.R.G.C. forces and Syrian Army once the Islamic State is defeated in Mosul.

Recently, the I.R.G.C.-affiliated media outlets have raised the profile of the Nujaba group, and senior Iranian leaders have held meetings with its top commanders. Indeed, the press conference in which Nujaba announced the creation of  the Golan Liberation Brigade was organized by the Tasnim News Agency, which is a prominent I.R.G.C. media outlet. By focusing their propaganda against the U.S. and describing Israel as the “real enemy,” Iranian leaders are trying to justify their involvement in foreign conflicts and to convince the Iranian people and Muslims around the world that the Islamic Republic is the standard-bearer and true defender of Islam. But such claims ring hollow when most victims of the I.R.G.C.’s military adventurism and proxy wars are Muslims.