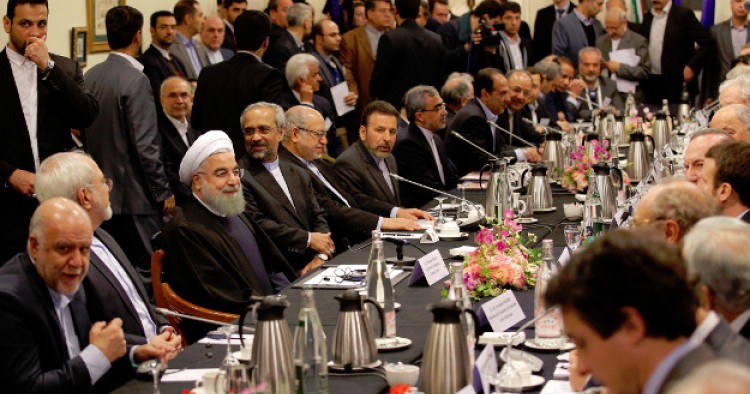 A senior Iranian official said that Tehran will not let the Trump administration to blame Iran if the nuclear deal falls apart. “America is seeking to walk away from the J.C.P.O.A. [Joint Comprehensive Plan of Action also known as the Iran nuclear deal] at the expense of Iran,” warned Ali Shamkhani, the Secretary General of Iran’s Supreme National Security Council. “Our side will definitely not provide this opportunity to this country [U.S.].” However, Shamkhani, who is also a senior aide to Supreme Leader Ali Khamenei, emphasized that “this does not mean remaining committed to the J.C.P.O.A. at all costs.”

The former chief commander of the Islamic Revolution Guards Corps (I.R.G.C.) Navy further noted that other signatories of the nuclear accord would not side with Washington to annul the deal. “From a political standpoint, five countries have actively stood up to America and they all have openly and implicitly consider America the violator of J.C.P.O.A. – which is a political achievement for Iran with minimal investment.”

Shamkhani also reiterated that Tehran will not halt its missile program under U.S. pressure. “Iran’s defense power has so far remained a deterrence against most threats. We will design and produce required conventional weapons for all threats,” he stressed. “The missile strikes by Sepah [I.R.G.C.] against Takfiri terrorists in Syria showed that the Iranian armed forces, by relying on domestic capacities, are at the highest state of readiness to respond to any evil and destabilizing actions against our country.”

Comment: As the Trump administration is ratcheting up economic sanctions on Iran and working with Washington’s Arab allies to push back against Iran’s growing influence in the region, Iranian officials are reaching out to potential allies around the world to minimize the impact of U.S.-led efforts to contain the Islamic Republic. Tehran, in particular, is trying to drive a wedge between the United States and major European powers.

On June 27, for example, Iran’s Foreign Minister Javad Zarif blasted the Trump administration’s travel ban and new U.S. sanctions on Iran in a meeting with his German counterpart Sigmar Gabriel in Berlin. The foreign minister of Germany, which is a signatory to the Iran nuclear accord, agreed with Zarif that the deal should be fully implemented by all parties involved. "We stand behind this agreement and want to support all the parties in their efforts to fulfill it," Gabriel said. "As the Federal Republic of Germany and as Europeans we would oppose any attempts to call it into question."

When French President Emmanuel Macron won the elections in France, President Hassan Rouhani congratulated him and urged the new government in Paris to play a more active role in the implementation of the nuclear agreement. According to the Iranian media, Rouhani praised the French government’s “influential” role in making the nuclear accord possible almost two years ago, whereas he criticized the U.S. for not honoring its commitments.

Several Iranian lawmakers expressed the hope that the Macron government will cultivate closer ties with Tehran. Hossein Taghva-Hosseini, the spokesman of the National Security and Foreign Policy Committee of the parliament, also emphasized that Tehran should exploit the widening gulf between the European Union and the United States to "work with Brussels to challenge Washington’s unilateralism."