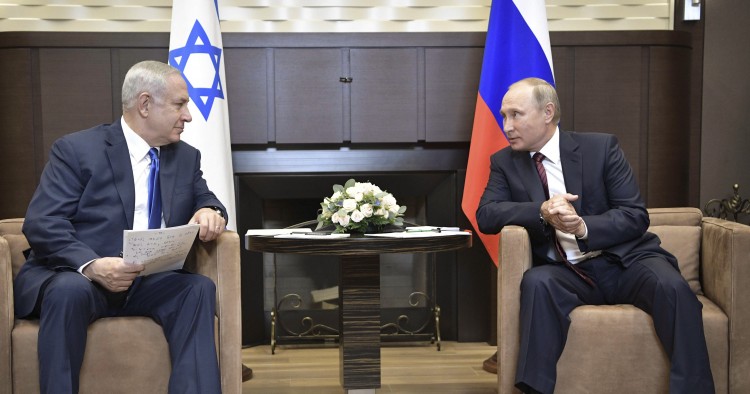 Even before Israeli Prime Minister Benjamin Netanyahu arrived at the Black Sea resort of Sochi last Wednesday for his sixth consultation in two years with Russian President Vladimir Putin, Moscow’s representative in Tel Aviv laid out a soothing if improbable vision of a Syria free of Iranian troops and Shiite militias.

“We agree that there should be no foreign forces in Syria, including the Iranian army,” Russian ambassador Alexander Shane Russian told Israel’s Channel One News. “But at this stage we must support the peace process, the current [Assad] government, and the struggle against terror.”

If the Russians and the Israelis agreed that ISIS and al-Qaeda are the only “terror” groups operating in Syria, Tel Aviv might be placated with the ambassador’s assertion that Moscow “always takes into account Israel’s security interests when it is conducting its counter-terrorism operation in Syria and trying to bring peace to the region.”

After all, the regime’s army has been depleted by battlefield casualties and dwindling recruitment, the territory of the Syrian state is on course to be diminished in the northeast by some form of Kurdish autonomy, and the nationwide destruction of basic infrastructure should leave Assad with very little to challenge Israel.

So far Putin and Netanyahu have avoided a direct clash as their air forces hit different targets—the Israelis bombing Hezbollah and Shiite militias, and the Russians targeting ISIS and rebel-friendly population centers. Still Netanyahu and the Israeli security establishment are clearly ill at ease.

The Russian control tower in Latakia maintains a hotline with the Israeli defense ministry, and it is acknowledged that the Israeli air force has conducted over 100 raids on Iranian and Shiite militia targets, but there are scores of these assets too close to Russian installations for Tel Aviv to hit without triggering a crisis with Moscow.

Meanwhile, Iran is building missile factories adjacent to regime bases in Tartus, and intensifying coordination with Lebanon’s Hezbollah. The Israeli leadership is concerned that Tehran’s support for the “axis of resistance” is as robust as ever. Assad’s government underscored its commitment to the alliance with Tehran and the struggle against Israel even as its state-run media largely ignored the Putin-Netanyahu summit.

“Syria and its allies, Russia and Iran, remain firm in their support of Arab and Palestinian rights despite all plots woven by the Americans, the Israelis, and the Arab Gulf regimes,” declared Assad advisor Bouthaina Shaaban in June. “What is happening in Syria, Iraq, and across the Arab nation is linked to the Arab-Israeli conflict as it seeks to divide Arabs and distance them from their allies in Iran and Russia,” she added.

Curtailing Iranian power in Syria would demonstrate Russia’s commitment to its espoused goal of advancing regional security and quell increasing domestic dissent over support for Assad—especially among its own large Sunni Muslim minority. But Damascus was already deeply intertwined with the Iranians prior to the Syrian uprising. The Syrians were reluctant to downgrade its relationship with Iran in exchange for peace with Israel, and it’s unlikely that Assad would be willing, or even able, to show them the door now.

Former U.S. ambassador to Israel Daniel Shapiro recalls an early effort by former President Barack Obama to engage the Assad regime on curtailing Iran’s presence in Syria. “I drew the conclusion that the odds of an agreement between Israel and Syria were exceedingly low, and it’s not because Israel wasn’t ready to consider the price,” Shapiro told me.

“There were serious discussions with a land for peace formula that’s familiar from earlier negotiations. But there was never an indication that I saw, and it also affected our own engagement strategy with Syria, that Assad was prepared to significantly reduce his ties to Iran and Hezbollah,” said Shapiro, now a visiting fellow at the Tel Aviv University’s Institute for National Security Studies. “That reliance was such a central pillar of his own regime’s ability to maintain control in Syria and maintain influence in Lebanon. As late as 2011, there were people in the U.S. and in Israel who thought such a deal would be possible, but I was not one of them.”

Assad’s commitment to the alliance with Iran has swelled as the current American administration has functionally abandoned the moderate Sunni rebels and partnered with the Russians on de-escalation arrangements in southern Syria—an effort that has also brought the Jordanians closer to Moscow.

With the Trump administration moving quickly toward Putin’s managed stability stance on issues including constitutional and security arrangements, disappointed Sunni opposition figures are criticizing the Israelis for not embracing the anti-Assad cause.

“There are influential entities in Israel that want to protect Assad,” said Fahad al-Masri, a former Free Syrian Army spokesman who now leads an opposition group based in Paris called the National Salvation Front.

In an attempt to shape the Syria policy of the incoming administration, the Masri’s group issued a detailed “road map” for Syrian-Israeli peace just five days before Trump’s inauguration declaring friendship with Israel, a call to expel all Iranian military advisers and Hezbollah troops from Syria, and a “fair settlement on the Golan issue that satisfies both the Syrian and Israeli peoples.”

Israel’s ambivalence to advance the cause of the F.S.A., and Netanyahu’s “realism” on Assad dashed Masri’s hopes. “Our initiative was aborted by some parties inside Israel still interested in a no peace, no war status,” said Masri.

Pro-Assad Syrians are gloating at Tel Aviv’s diminished room to maneuver with the Russians now in place. “It’s not the same Syria as two or three years ago,” Wael al-Hussaini, a Syrian-Lebanese blogger and a contributor to Russia Insider, told me. “Damascus can increasingly defend itself against Israeli airstrikes and I think both Putin and Assad could agree to remove the Iranians and Hezbollah, if the Israelis leave the Golan.”

No matter how frequently Netanyahu visits Russia, Israel is facing a grim outlook along its northern border. Iran and Hezbollah are expanding their influence in Syria, increasing Assad’s dependence on them for survival. Netanyahu’s tough talk can’t diminish the reality that Israel stands, for the moment, in a weakened position as a postwar Syria begins to emerge.