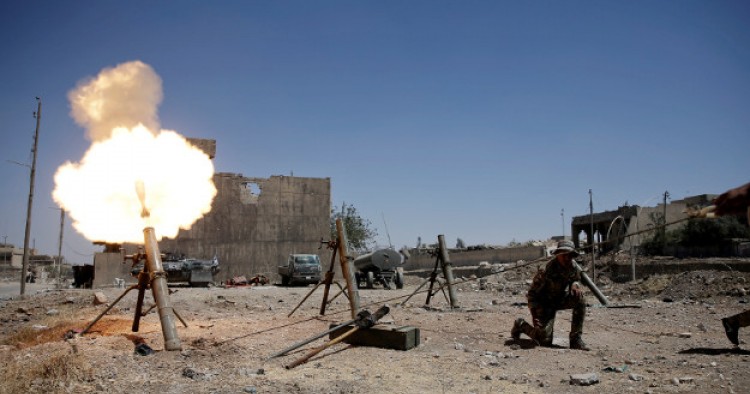 With the Islamic State ousted from Mosul, several Iraqi parliamentarians and media outlets affiliated with the Islamic Revolution Guards Corps (I.R.G.C.) have called on the Rouhani government to “prepare the ground” for Iranian companies to play a larger role in the Iraqi city’s reconstruction process. “Iran must make efforts to actively participate in the rebuilding of Mosul and other war-ravaged cities of Iraq and export Iran’s technological and engineering services and other goods needed in Iraq. This is a win-win relationship for both Iran and Iraq,” wrote I.R.G.C.-affiliated Fars News Agency. “With an active economic diplomacy with Iraq, it [the government] should not let this economic opportunity after the defeat of Daesh [Islamic State] to be exploited by countries such as America and Saudi Arabia, which have played a role in the creation of Daesh, or Turkey, which has prolonged the crisis in Iraq,” it added. Iranian economic analysts say Iran’s proximity to Mosul allows Iranian companies to implement construction and other projects in Mosul at a lower cost, and that these projects will stimulate economic growth and job creation inside Iran. “Because of economic recession in the country, tons of cement, tiles and other construction material are overstocked and Iraq can be a new market.”

Shakir Abdul Raziq al-Da’emi, Iraq’s trade attaché at the embassy in Tehran, has also encouraged the Iranian government and private sector to actively participate in Mosul’s reconstruction, highlighting that his country’s infrastructure has been destroyed.

Comment: The destruction of Mosul appears to be far greater than initially anticipated. While at least $1 billion is needed for the initial reconstruction phase to allow thousands of displaced Iraqi to return home, it will take several years and billions of dollars more to completely rebuild the city and provide social services to its inhabitants. Although the city is now liberated, there is no comprehensive plan or international will to start the reconstruction process. And if previous reconstruction efforts in Afghanistan and Iraq are any indication, lack of funding, corruption, incompetence and security problems will hinder a smooth rebuilding process.

While Iraq’s neighbors should be encouraged to play an active role in the reconstruction of Mosul and other liberated Iraqi cities, regional power play for influence in Mosul and across Iraq could have adverse impact.

In Iran, the line between state-run and private companies is blurred. The I.R.G.C. dominates the Iranian economy and its front companies under pseudo names operate both inside and outside the country. As the Iraqi and Syrian governments are reclaiming more territory and begin reconstruction, I.R.G.C. companies are seeking to play a large part.

In Syria, for example, the I.R.G.C. has already stepped up efforts to dominate Syria’s economic sector and expand Iran’s soft power influence over Syria. In January, Tehran signed several agreements with Damascus, including building a mobile phone network in Syria as well as mining and agricultural projects.

It is worth noting that Iran’s soft power tools are not benign, but are linked with Tehran’s broader expansionist agenda in the region. For example, the IRGC established the Iranian Committee for the Reconstruction of Lebanon (ICRL) after the 2006 Israel-Hezbollah war to rebuild Hezbollah-dominated regions in southern Lebanon; two years later, the United States Department of Treasury designated the ICRL as a terrorist organization because it “financed and facilitated” the activities of Hezbollah, a US-designated terrorist organization. Hassan Shateri, a Quds Force commander, headed the ICRL under the pseudonym Hessam Khoshnevis from its inception until he was killed in Syria in February 2013. According to Hassan Hijazi, a Hezbollah operative who worked with Shateri, the Quds Force commander had implemented over 5,000 construction and reconstruction projects in Lebanon. It was also the ICRL that built Hezbollah’s secret fiber optics network that sparked a dangerous political and military crisis in Lebanon in 2008.