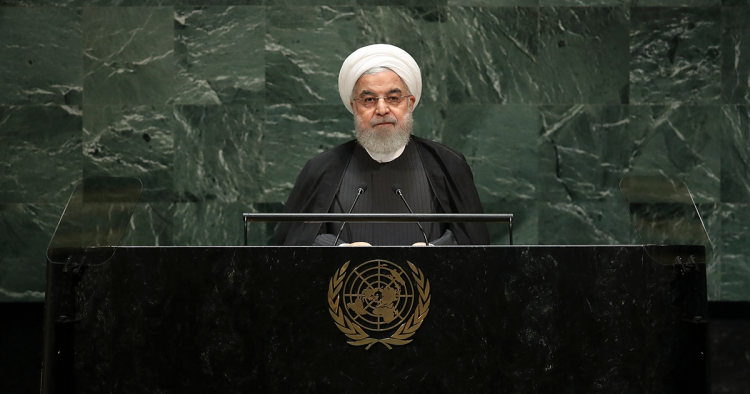 Last September, at the 74th session of the U.N. General Assembly, Iranian President Hassan Rouhani proposed the optimistically named “Hormuz Peace Endeavor” (HOPE). Unveiling the plan, Rouhani said that it was Iran’s historical responsibility to maintain security, peace, stability, and progress in the Persian Gulf and Strait of Hormuz and all littoral countries should join the “coalition for HOPE.” In addition, the permanent members of the U.N. Security Council have also been invited by Tehran to participate in a collective dialogue to achieve lasting peace. Over the past year, however, Iran’s plan has failed to gain any traction with the Gulf Cooperation Council (GCC) states, even as the region’s security environment has fundamentally changed in ways that are detrimental to the Islamic Republic.

Iran and the GCC states

Iran's relations with the GCC states are now more troubled than they were 12 months ago. The six member states of the GCC have largely ignored HOPE as a regional security initiative, and none of them has been willing to enter into tangible security cooperation with Tehran. Saudi Arabia, the largest and most influential GCC state as well as one of the main powers in the Arab and Sunni Islamic worlds, has completely ignored HOPE. Diplomatic relations between Tehran and Riyadh, which were severed in early 2016 following an extremist attack on the Saudi embassy in Tehran and the Saudi consulate in Mashhad, have not been re-established.

The war of words between Iran and Saudi Arabia continues. Saudi officials and the U.S. have blamed Iran for attacks against the Aramco oil-processing facility in eastern Saudi Arabia in September 2019. Iran denies the allegations and maintains that the attacks were carried out by Yemen’s Houthis, who Tehran says are responding to Saudi attacks on Yemen. However, a June 2020 report by U.N. experts released by U.N. Secretary-General Antonio Guterres confirmed that the missiles and drones used to attack Saudi oil facilities and airports were of Iranian origin. In the face of such evidence, it has been difficult for Iran to absolve itself of responsibility for the attacks. In the meantime, Iran's support for the Houthis in Yemen and Saudi Arabia's support for the U.N.-backed Yemeni government has kept both Riyadh and Tehran bogged down in the most destructive conflict in the Middle East.

Kuwait, for its part, has taken a different approach. While avoiding overt friction with Iran, it maintains close ties with the U.S. and is home to one of the major American military bases in the region. As part of the launch of the HOPE initiative, Iran had called for the withdrawal of supra-regional forces, including the United States, from the Persian Gulf. But Kuwait, which borders Iraq and Iran, two major regional powers, sees Iran's demand as opposed to its defense and security needs. Kuwait remains concerned about its two neighbors' future military plans and considers the U.S. military presence on its soil a strategic deterrent against both Tehran and Baghdad.

Qatar, which after Oman has the best relations with Iran among the GCC states, has not welcomed HOPE in practice. After Qatar was ostracized by Saudi Arabia, Bahrain, the UAE, and Egypt, and an economic blockade was imposed against Doha in 2017, Iran was quick to provide aid, including opening Iranian airspace to Qatari commercial flights and delivering food from Iranian ports to Doha. The emir of Qatar, Sheikh Tamim bin Hamad, traveled to Tehran at the beginning of 2020, an important event since few leaders from the GCC have visited the Iranian capital in recent years. He was there to reassure the Iranians that Qatar has no desire to pursue a hostile policy toward Iran. Nevertheless, Qatar prefers the United States to Iran when it comes to military and security cooperation. Doha has rejected Tehran's offer of security and defense cooperation within the framework of HOPE and, like Kuwait, has preferred to maintain strategic military and security relations with the United States. While Qatar hosts U.S. Central Command (CENTCOM) at al-Udeid base, Iran has declared CENTCOM a terrorist organization — a move it made in retaliation for the U.S. designation of the Islamic Revolutionary Guard Corps (IRGC) as a terrorist group.

Despite the above, the most important sign of the failure of HOPE is the agreement of Bahrain and the UAE to normalize relations with Israel. A day before the signing ceremony in Washington, Bahraini Interior Minister Rashid bin Abdullah al-Khalifa, referring to Iran's behavior in the region, called Iran a permanent threat to its national security. Senior Iranian political and military officials have accused the UAE and Bahrain of treason for normalizing relations with Israel. This war of words is clearly at odds with the goals of HOPE. There are even whispers of Oman's desire to normalize relations with Israel. Although Saudi Arabia has said it will not establish relations with Israel until a Palestinian state is formed, it has allowed Israeli aircraft to pass through the country for the first time on a flight to the UAE.

All of these developments signal a new and evolving security environment in the Middle East and the Persian Gulf — one that is increasingly to Iran’s detriment and is fundamentally different from the situation just a year ago.

A year ago, political officials and military commanders in Tehran, especially IRGC commanders like Qassem Soleimani, head of the Quds Force, saw Iran as ascendant. In their view, Iran had supported Syria and Iraq against ISIS and other armed opposition groups, preventing the fall of Iranian-backed governments. In Lebanon, too, it brokered the formation of a cabinet under the influence of Hezbollah, while in Yemen, the pro-Iran Houthis were in control of the capital, Sanaa. Iran not only reached the Israeli border in southern Lebanon, the Golan Heights, and the Gaza Strip through its proxy groups, but it also attacked the Aramco oil facility and brought the conflict directly to Saudi territory.

Now, however, the situation is quite different. Israel is entering the political, economic, and security environment of the Persian Gulf. Israeli businessmen are on their way to the region, and diplomats will soon follow. Iran, which just a year ago proposed the idea of ​​security cooperation with its Arab neighbors in the Persian Gulf, now sees them pursuing political, economic, and security cooperation with Israel instead, its regional archenemy.

The U.S. military provides support for the GCC states and the possibility of effective Iranian military action against them is almost zero. Moreover, any Iranian military action against the GCC states could unite the Arab world against Iran, and this would make things even more difficult for Tehran. Economically, Iran is already weakened and under sanctions; it is not in a position to pressure its southern Arab neighbors.

The failure of HOPE is undoubtedly due in part to the mistakes of the Islamic Republic itself. Its Middle East policy over the past decade, centered on the IRGC’s expansionist agenda and the marginalization of the Ministry of Foreign Affairs, has exacerbated security concerns among its neighbors in the Persian Gulf. Many Arab countries, mostly Sunni majority in make-up, feel that Iran is building a Shiite crescent and intends to interfere in their internal affairs. Statements by the Arab League, the Organization of Islamic Cooperation, and the GCC indicate that these concerns are widespread and not limited to specific countries.

This situation has prompted some politicians inside Iran to criticize the Islamic Republic’s Middle East policies and call for a different approach and better ties with the Arab world. This has been reflected in a softening of language, as one recent example made clear. While the IRGC has consistently spoken threateningly to Saudi Arabia, Ali Motahari, the former deputy speaker of Parliament, announced on Twitter that Kuwait and Saudi Arabia, which he said had resisted U.S. pressure, should be given further reassurances and said Tehran genuinely wants to pursue a balanced regional policy. On Sept. 21, Iran’s foreign minister told an American audience at an online event that Tehran deeply regrets Saudi Arabia’s dismissal of what Zarif called efforts to start a dialogue with Riyadh. Just two days later, King Salman of Saudi Arabia used his first-ever speech at the annual U.N. General Assembly to denounce Tehran’s regional agenda, saying, “Our experience with the Iranian regime has taught us that partial solutions and appeasement did not stop its threats to international peace and security.” Tehran hit back, dismissing Salman’s accusations as “delirious talk.” A year after Rouhani put HOPE on the table, it is clear that Tehran needs to do plenty more reassuring if it wants to change perceptions and reshape calculations in the GCC.

Reza (Morad) Vaisi is a journalist specializing in Iranian security and military history based in Washington D.C. The views expressed in this piece are his own.