Iran is learning from Russia’s use of missiles in Ukraine 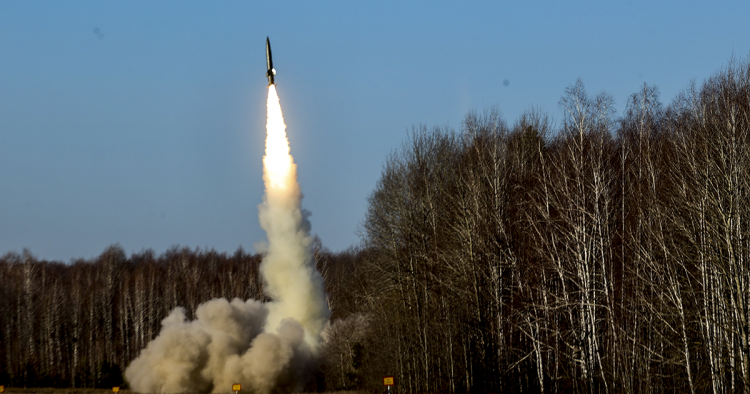 Russia’s invasion of Ukraine has turned into the largest testing ground for ballistic and cruise missiles in modern warfare. According to the latest figures from a senior U.S. official as of April 29, 2022, Russia had launched more than 1,950 missiles — far more than the 955 cruise missile strikes U.S. forces carried out during the invasion of Iraq in 2003.

Aside from scale, the use of missiles in the Russian operation is also different from previous 21st-century wars in terms of the combination of systems employed. Russia’s missile strategy has involved the use of ballistic strikes (the Iskander and Tuchka-M), cruise launches (Kalibr), hypersonic strikes (Kinzhal), and coastal defense systems attacking ground targets (the Bastion and Bal systems). In comparison, U.S. forces in Iraq relied only on cruise strikes, using the Tomahawk BGM-109 and AGM-86 CALCAM.

In fact, it’s the first time since World War II that tactical ballistic missiles have played a major role in battle. It is not hard to imagine that militaries around the world are watching these developments carefully, and Iran is certainly no exception. With its military doctrine heavily dependent on ballistic missile forces, Iran has a particular interest in the war in Ukraine and is taking notes on Russia’s use of missiles.

Missiles can deter; negotiations not so much

Despite recent reports about the series of explosions on the Russian side of the border, Ukraine’s limited long-range strike capability and inability to inflict costs behind frontlines into Russian territory have prevented the meaningful extension of the war into mainland Russia. The absence of such a threat influenced Russia’s calculus in starting the war and hampered the Ukrainian army’s ability to deter Russian aggression. This is how the Iranian military views the war in Ukraine. This logic is clearly laid out in an internal bulletin from the Islamic Revolutionary Guards Corps (IRGC), which states that, “Missiles, by building the balance of fear, can prevent war and will force adversaries to resort to diplomacy.”

Along the same lines, Iran’s Deputy Chief of General Staff for the Armed Forces Maj. Gen. Aziz Nasirzade said, “The key lesson from the Ukraine war is that you cannot close your eyes on deterrence and talk about limiting your missile (military) power.” Many conservative figures in Iran have also made similar comments, supporting the narrative that war is the fate of any country that surrenders its deterrent capabilities to adversaries and relies on security guarantees from foreign powers. On the latter point, they refer to the 1994 Budapest Memorandum, in which Ukraine transferred former Soviet strategic missiles and nuclear weapons to Russia in return for security guarantees.

The war in Ukraine reinforces the position of those who emphasize the importance of “power and deterrence” and adhere to a “no talk” policy when it comes to the U.S. and Tehran’s missile program. Negotiating with the U.S. government about Iran’s missile program is seen as risky and unreliable, while Tehran’s homegrown missile capabilities are portrayed as ensuring deterrence and stability. In this way, the war in Ukraine is likely to further support Iran’s perception that missiles are a critical tool of deterrence that should not be compromised.

Ballistic missiles have a battlefield value

In addition, the Ukraine war will likely impact the thinking about Iran’s missile doctrine, especially the ways in which its missile forces should be employed at a tactical level. Precision missile strikes proved a critical means for Russia to neutralize Ukrainian infrastructure and capabilities in areas where aerial bombing was risky. The Iskander precision strikes inflicted considerable damage and degraded Ukrainian capabilities when combined with mass firing. Russian targeting of Ukrainian military assets, railroads, and logistics in the western part of the country largely relied on missile strikes. Even now, after more than two months of war, missiles continue to play a major tactical role in Russia’s campaign.

These initial observations, again, reinforce Iran’s earlier assessments about the battlefield value of mass firing of short- and medium-range ballistic missiles. In recent years, Tehran has become more confident in signaling the operational value of its precision missiles. This has perhaps been most clear in Tehran’s use of its ballistic missiles to strike ISIS positions in eastern Syria in 2017, strongholds of Kurdish separatist groups in Iraq in 2018, the U.S. Ain-Assad airbase in 2020, and the alleged Israeli intelligence center in Erbil in 2022.

The Ukrainian case is proving that sustaining missile fires on enemy positions is both feasible and effective in a large conventional war as well. Especially when deterrence has failed and war is inevitable, missiles can help compensate for the absence of air power on the tactical level.

More controversies over the role of airpower

One of the main reasons for Russia’s heavy reliance on missiles in Ukraine is the failure of its air force to secure air superiority. For a country like Iran, which has an old fleet of fighter jets in need of modernization, the performance of the Russian Air Force in Ukraine provides critical lessons.

For years, there were discussions within the Iranian defense establishment about whether to invest in its air force or missile program. Amid sanctions and lack of access to the international arms market, Iran decided to prioritize its missile forces while trying to keep its old fleet operational through indigenous modernization efforts and the implementation of new technologies, such as unmanned aerial vehicles (UAVs). Iranian strategists have always been skeptical about the benefits of maintaining a conventional air force when confronting the much stronger U.S. Air Force. The April 2022 military parade of the Artesh (Iran’s regular military) demonstrated a shift in the choice of weapon systems, with missiles, mobilized surface-to-air missile (SAM) systems, and UAVs prioritized over fighter jets.

At the same time, the idea of reviving Iran’s air force by buying Russian-made jets has remained alive. Now, the question is whether the controversial role of Russia’s airpower in the Ukraine conflict will impact Iran’s assessment of the value of its own air force. Russia’s weak performance may raise doubts about the value of airpower in Iran’s military doctrine and the way it fights future wars. It may also deepen skepticism about spending Tehran’s limited financial resources on military jets. Thus, the Ukraine war may change the balance of power within the Iranian military establishment in favor of those who prioritize missiles over conventional airpower.

Russia’s experience in Ukraine has highlighted important issues about the quantity and quality of missile stockpiles as well. U.S. sources estimate that the failure rate for some Russian precision-guided missiles is as high as 60%. Whatever the reasons for this may be — Ukrainian electronic warfare, launch failures, low production quality, weather conditions, or maintenance issues — such a high failure rate means that more missiles have to be fired at a single target. In this case, the size of the overall missile stockpile becomes an important factor to maintain the tempo of an operation and have the desired results.

On April 24 open-source research organization Bellingcat reported that Russia has likely used 70% of its stockpile of precision missiles. Concerns over possible shortages and supply issues in a longer-term campaign may explain why Russia switches between various missile systems. For example, in an unusual move, Russia has used its Bastion and Bal coastal defense systems to strike ground targets.

Iran is keeping a close eye on these developments as well, noting the importance of having a larger stockpile of missiles for a war of attrition. For Tehran, numbers have been always an important factor. For years, the IRGC considered large missile salvos as a means to saturate and overwhelm missile defense systems. However, the Ukrainian war brought to the fore the direct link between qualitative factors associated with failure rates and the size of missile stockpiles. This fact is likely to spark debate among Iran's defense industries and the IRGC about the size of the country’s missile stockpile and how its maintenance systems can be improved.

The final word: The limits of relying on missiles

What can be stated with certainty is that the Iranian military has interpreted the war in Ukraine as evidence that it made the right choice in making missiles a pillar of its deterrence strategy. The war has provided invaluable insights about the operational requirements of employing missiles in a major war as well. However, the conflict has also highlighted the downsides of relying on missile forces: The Russian experience shows that precision missile strikes are unlikely to decisively affect the course of a war. They have limited value in taking and holding territory and are insufficient to secure a military victory. Missile strikes cannot transform the battlefield and create a politically favorable outcome.

These facts tell us a great deal about the limits of Iran’s power projection in the Middle East. Russia’s more powerful, precise, and diverse missile stockpile was not able to change the course of the war in Ukraine, so there is no reason to believe that Iranian missiles could ever do so, especially against a more powerful opponent. Missiles alone can hardly provide Tehran with a strategic advantage outside its borders. If combined with capabilities in other military domains — especially land forces, amphibious capabilities, and so on — missiles could potentially expand Iran’s power. In the absence of these capabilities, however, Iranian missiles will be mostly confined to their two classic roles: as a tool to deter aggression by raising the cost for the aggressor, and a means to demonstrate power in limited operational circumstances.

Dr. Abdolrasool Divsallar is an expert on Iran’s foreign and defense policy. He co-founded the Regional Security Initiative at the Middle East Directions Programme of the Robert Schuman Centre for Advanced Studies at the European University Institute (EUI). He is also an adjunct professor at the Universita’ Cattolica in Milan and a non-resident scholar with MEI’s Iran Program. He tweets @Divsallar. The views expressed in this piece are his own.