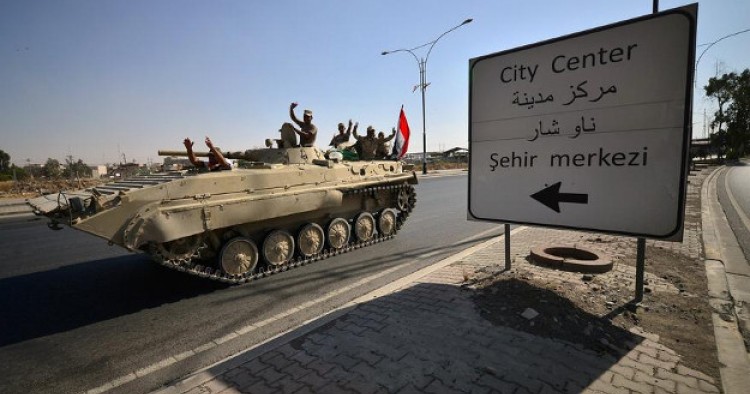 An Iranian official from the western province of Kermanshah said Monday that the Parviz Khan border crossing between Iran and Iraq was shut down yesterday because of “internal clashes between the Iraqi federal government and Kurdistan region.” Faramorz Akbari, the governor of Ghasreshirin in Kermanshah, added that all trade transactions and transportation through this border entry have temporarily been suspended until the “central government forces replace those of the Kurdistan region along this border.” According to the Iranian official, the closure of the border crossing was at the request of the Baghdad government. “Until the Perviz Khan border is closed, the Khosravi border crossing will be used as an alternative for all transactions,” he added.

Comment: Since the Iraqi Kurdistan region’s September 25 independence referendum vote, Tehran has joined hands with Baghdad and Ankara to pressure Ebril to cancel the result of the plebiscite. Iran has already halted all flights to and from Erbil and Sulaymaniyah in northern Iraq and the Iranina military launched war games near the Kurdish border. On Sunday, the Iranian government closed another border crossing called Bashmagh which enters the Iraqi Kurdistan region. Tehran is also helping Baghdad to take control of border crossings between the two countries.

But while Iranian military leaders and hardliners aim to punish Erbil over the vote, the business community in Iran hopes such punitive measures are only temporary as they harm the Iranian economy. About a quarter of Iranian exports to Iraq go the Iraqi Kurdistan region, and a severance of trade ties would adversely impact Iran’s businesses.

An Iranian official said two weeks ago that Tehran had stopped 600 trucks carrying about 13,000 tons of fuel to enter Iraqi Kurdistan as part of a trade embargo on Erbil, Fars News Agency reported. Seyed Hamid Hosseini, the head of Iran-Iraq Chamber of Commerce, told reporters in Tehran that the decision was taken after Iraqi Kurdish leaders held an independence referendum a week ago despite opposition from Baghdad and Tehran. He expressed the hope that the Kurdish dispute is over so that Iranian businesses can resume exporting their merchandise to northern Iraq. “It is expected that the Supreme National Security Council takes a decision regarding Iran’s relations with the Kurdish region taking into consideration all aspects, and that closing the borders will be the last option,” he said.

Hosseini emphasized that the Kurdish vote is not as risky for Iran as it may be for Turkey and Iraq. He, therefore, suggested that Tehran should not take the lead in imposing trade ban on Iraqi Kurdistan. Hosseini also raised doubt about relying on Turkey as a partner against Iraqi Kurdistan. “In the battle between pride and economy, Turkey has shown that it prioritizes economic and trade issues,” he said, adding that Ankara apologized to Moscow after shooting a Russian plane and resumed its trade relations.

The latest border closures come as Iraqi armed forces today entered the center of Kirkuk after driving Kurdish Peshmerga forces out of strategic regions in the disputed province.