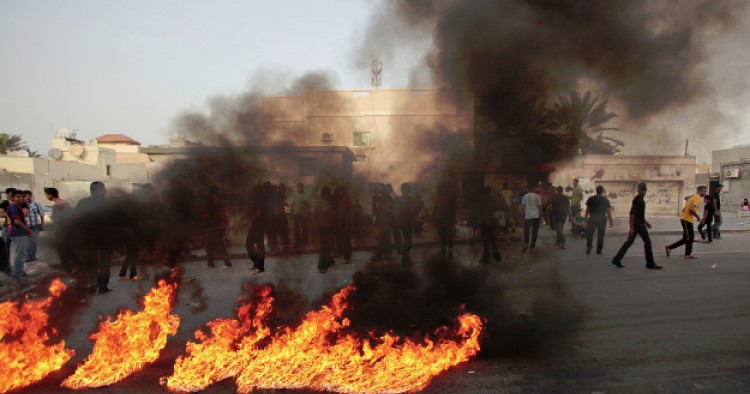 The leader of a prominent Iran-controlled Iraqi Shiite militia group has warned that his forces and other Shiite militant groups will respond to the Bahraini government’s prosecution of Ayatollah Isa Qassim. “The Hamad [bin Isa al-Khalifa] regime should not imagine that targeting Sheikh Qassim is an internal issue,” Akram al-Kaabi, the chief commander of the Harakat al-Nujaba, said in an interview with Iran’s al-Alam News Network’s Arabic channel. “It is targeting all the Shiites of the world,” he emphasized. “We in the Harakat al-Nujaba, many resistance factions, the Hashd al-Shaabi [Popular Mobilization Forces], and all world Shiites have the right to respond to the targeting of Sheikh Qassim,” he warned.

Ayatollah Qassim, the spiritual leader of the Bahraini Shiites, is being tried by the Bahraini government on charges of money laundering and collecting funds without the government’s permission. On Sunday, a high court in Bahrain delayed a rule on his trial for a second time. He may face years in jail and perhaps also expulsion from the Kingdom as authorities had stripped him of his citizenship last year.

Kaabi’s remarks drew a reaction from Anwar Mohammad Gargash, the United Arab Emirate’s Minister of State for Foreign Affairs. “Iran’s calling for violence in Bahrain is evidence of Iran’s meddling in regional domestic affairs. How long will this last?”

Comment: Harakat al-Nujaba is Shiite Iraqi militia group that operates under the leadership of Major General Qassem Soleimani, the commander of the Islamic Revolution Guards Corps (I.R.G.C.) Quds Force. The leader of the group, Kaabi, makes no secret of his allegiance to Iran’s Supreme Leader Ali Khamenei or his close relationship with Soleimani. The I.R.G.C. uses the Nujaba group and other powerful Shiite units within the Iraqi P.M.F. not just to fight the Islamic State, but also as a pressure tool against the Baghdad government, regional Sunni states and the United States. Kaabi once famously stated that his forces would oust the Baghdad government if ordered by Khamenei. The Nujaba group also fights in Syria and has close operational links with the Lebanese Hezbollah.

In March, the Nujaba movement announced  that it had established a new brigade to seize the Golan Heights from Israel.  “Israel is weaker than a spider web. Islamic resistance is capable of confronting the axis of evil and annihilating the occupying Zionist regime,” Kaabi told Lebanon-based Arabic-language al-Mayadeen news network.

Now, it appears that the I.R.G.C. may also use the group to pressure the Bahraini government.

Manama has repeatedly accused Tehran of inciting violence against the Bahraini government and supporting groups that have attacked Bahraini security forces in recent years. In March, authorities in Bahrain said that they had arrested 25 members of an Iran-backed “terror cell” involved in recent attacks on the Bahraini security forces, including a deadly jail break in January. A statement released by the Bahraini government added that those arrested belonged to a 54-member group that went to Iran and Iraq to “receive training in the use of explosives and firearms at Revolutionary Guard camps."

Any escalation by Iran against the Bahraini government will be closely watched not only by other Gulf states but also the U.S. military. The United States Navy has had a presence in Bahrain since the presidency of Franklin Roosevelt, and its Fifth Fleet is headquartered in Bahrain – a strategic location that helps the U.S. Navy to ensure the security of maritime activity in the region, support the fight on terrorism, and monitor Iran’s subversive activities across the Middle East.