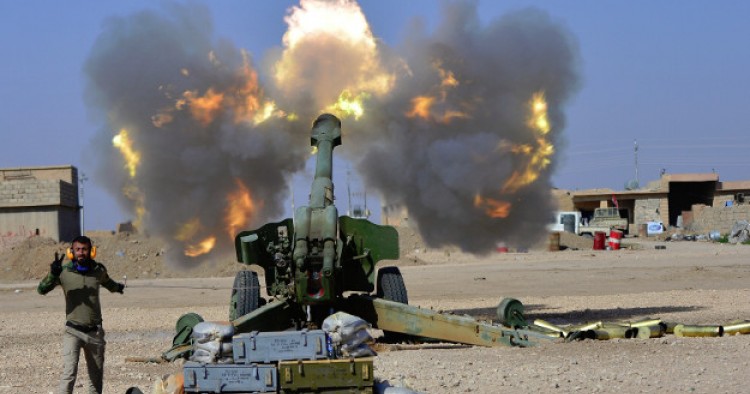 With the Islamic State on the verge of losing Mosul, Iran’s Islamic Revolution Guards Corps (I.R.G.C.) and its Iraqi militia proxies have recently launched a vicious propaganda campaign against the U.S. and its regional allies – posing security risks to U.S. military advisers that are helping the Iraqi security forces in the country. On March 16, a spokesman of Iraq’s Popular Mobilization Force (P.M.F.), accused the U.S. military and intelligence of supporting the leader of the Islamic State and trying to rescue terrorists trapped in western Mosul. “Abu Bakr al-Baghdadi is a protégé of America. His actions and movements are supervised by this country’s [U.S.] intelligence service,” Ali al-Husseini, who is also a commander of Iraqi Shiite militia group al-Hashd al-Turkmani, said an exclusive interview with I.R.G.C.-affiliated Tasnim News Agency. “Al-Baghdadi is an American puppet, and this is undeniable. I believe Americans know where he is but they hide him,” he continued. The militia leader further alleged that American forces in Iraq were trying to transfer Islamic State fighters from Iraq to Syria and Libya.

Husseini's allegations and threats were not restricted to American forces in Iraq. He also warned Turkey against militarily intervening in western Mosul. “The presence of Turkish forces is hostile and illegal. And we had announced at the very beginning that we would treat any military move by the Turkish army in Iraq as an invasion. Therefore, we will deal with any moves by [Turkish] forces the same way we dealt with Daesh [Islamic State].”

Threats to U.S. and its allies

Husseini’s remarks are the latest in a series of baseless allegations by Iran-linked Iraqi militia groups against the United States in the past one month. Jawad al-Talabwi, the commander of Asaib Ahl al-Haq, another powerful I.R.G.C.-linked P.M.F. group, last month accused the U.S. military of providing assistance to the Islamic State terrorists in the city of Tal Afar. Akram al-Kaabi, the chief commander of Harakat al-Nujaba, an Iraqi group that fights under the leadership of I.R.G.C. Quds Force Qassem Soleimani in both in Iraq and Syria, also threatened on March 11 that his forces would not allow American forces to take credit for victories against the Islamic State in Iraq. In recent weeks, I.R.G.C. media outlets have organized press conferences for several Iraqi militia commanders in Tehran.

The recent escalation in anti-American propaganda by the I.R.G.C. and its proxies portends two key issues: First, it indicates that the Iranian-backed militia forces in Iraq are likely to redirect their attention toward undermining the U.S. interests in Iraq once the Islamic State – the common enemy of Tehran and Washington at present – is defeated. Second, the I.R.G.C. may also be trying to send a message to the Trump administration that it will retaliate through its regional proxies if Washington pursued a more aggressive policy vis-à-vis Tehran. The inflammatory remarks by Iran-linked groups also endanger the presence of U.S. military advisers that are helping the Iraqi forces against the Islamic State in Mosul and across Iraq.

In his interview with Tasnim, Husseini also claimed that forces from al-Hashd al-Turkmani and other P.M.F. groups continue to actively participate in military operations in western Mosul, particularly in the Tal Afar region. He urged Prime Minister Haider al-Abadi to permit the al-Hashd al-Turkmani forces to enter Tal Afar. “This city is considered our region, and we should be given priority to enter it.”

Husseini’s demand for his forces to be allowed to enter Tal Afar is troubling. Tal Afar, a strategic city about 40 miles west of Mosul, has been a major Islamic State stronghold since 2014. Once inhabited by both Sunnis and Shiites, the population in the Turkmen-majority city is now largely Sunni. The P.M.F. forces – which is dominated by Iran-linked groups – have played a prominent role in the military campaign against the Islamic State in western Mosul. In recent months, P.M.F. forces have captured dozens of villages in western Mosul, took the control of an army airbase outside Tal Afar, and have cut off the communications and supply lines between Tal Afar and Syria.

The P.M.F.’s increasing role in western Mosul, particularly in Tal Afar, has been a matter of grave concern for Iraqi Sunnis and regional Sunni leaders, who have repeatedly expressed the worry that Iran-backed sectarian groups may engage in revenge killings against Tal Afar’s Sunni inhabitants once the Islamic State is ousted. Turkey, in particular, has warned that it would not remain silent to the P.M.F.’s advances into Tal Afar. Last month, Turkish Foreign Minister Mevlut Cavusoglu in a press conference warned that the participation of P.M.F. units in western Mosul could further inflame sectarianism in Iraq.

While some P.M.F. units are Iraqi nationalists and follow Iraq’s top cleric Grand Ayatollah Ali Sistani, what makes Iraqi Sunnis and regional Sunni states particularly worried is that, despite P.M.F.’s diversity, it is the Iran-backed militia units that are playing a leading role in western Mosul.