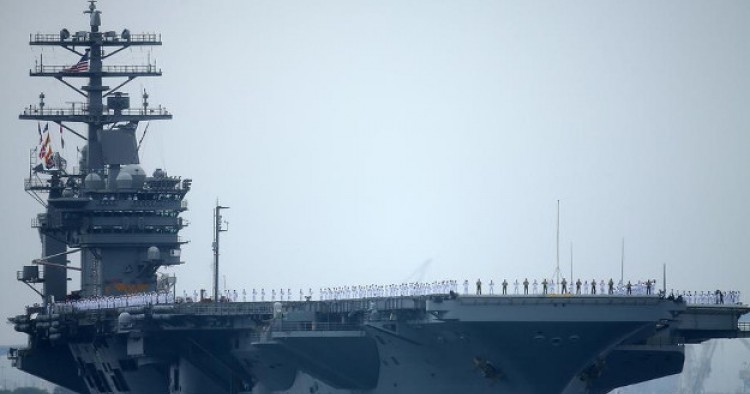 Iran sent another drone close to a U.S. Navy aircraft carried in the Persian Gulf on Sunday, the media reported today. Last week, an Iranian drone had an “unsafe” encounter with a U.S. Navy F-18 Hornet as it was landing aboard the U.S.S. Nimitz in the Persian Gulf. Navy Lt. "Despite repeated radio calls to establish communications and remain clear, the QOM-1's controlling station was unresponsive and the [unmanned aerial vehicle] did not use any aircraft navigation lights while it made several passes in close proximity to Nimitz and its escort ships during active flight operations, coming within 1,000 feet of U.S. aircraft," Navy Lt. Ian McConnaughey, a spokesman for the Bahrain-based 5th Fleet, said. "The failure of the Iranian UAV to utilize standard, internationally-mandated navigation lights during a night time approach of a U.S. aircraft carrier engaged in flight operations created a dangerous situation with the potential for collision and is not in keeping with international maritime customs and laws."

In June, U.S. military officials said  three U.S. Navy ships and a Marine helicopter had an “unsafe and unprofessional” encounter with an Iranian Navy vessel in international waters in the Persian Gulf. The amphibious assault ship U.S.S. Bataan, guided-missile destroyer U.S.S. Cole and dry cargo ship U.S.N.S. Washington Chambers were sailing through the Strait of Hormuz when an Iranian vessel came within 800 yards of the Bataan, according to a statement by the U.S. Navy’s Fifth Fleet. The Iranian vessel also shined a laser at the U.S. helicopter accompanying the ships. "Illuminating helicopters with lasers at night is dangerous as it creates a navigational hazard that can impair vision and can be disorienting to pilots using night vision goggles," the statement added. One U.S. defense official told CNN that the Iranian vessel was a missile boat.

In late April, American officials said that a U.S. Navy guided-missile destroyer fired a warning flare to deter an Islamic Revolution Guards Corps (I.R.G.C.) vessel approaching it in the Persian Gulf. According to McConnaughey, the Iranian vessel attempted to keep coming closer to the U.S.S. Mahan although the destroyer had changed course to avoid the escalation. Iran’s Foreign Minister Javad Zarif took to Twitter to defend the I.R.G.C.’s hostile move: "Breaking: Our Navy operates in — yes, correct — the Persian Gulf, not the Gulf of Mexico. Question is what US Navy doing 7,500 miles from home," he tweeted, also attaching a map showing a distance of 7,592 miles between the Persian Gulf and Miami.

In March, Centcom commander Gen. Joseph Votel told the U.S. Congress that the I.R.G.C. naval forces had increased their “unprofessional, unsafe and abnormal” maritime activities and regularly harassed U.S. ships in the Gulf region. "We have to hold Iran accountable,” he stressed. His comment came just days after the I.R.G.C. had sent fast-attack boats close to the U.S.N.S. Invincible in the Strait of Hormuz, forcing the U.S. ship to change course.

In reaction to Votel’s remarks, Iran's Defense Minister Hossein Dehghan called on Washington to leave the region. “What are the Americans doing in the Persian Gulf? It is better they leave this region and do not create trouble for the regional countries,” he said. “Is it acceptable that an armed, insane thief breaks into someone’s house and expects the red carpet to be rolled out for him?”

And on March 21, the George H.W. Bush – a U.S. aircraft carrier – confronted a number of Iranian Navy fast-attack boats approaching a U.S.-led, five-vessel flotilla as it entered the Strait of Hormuz. The incident reportedly prompted the U.S. warship to send helicopter gunships to deter Iranians speedboats, some of which had reached as close as half a mile away from the aircraft carrier. U.S. Navy commanders have warned that such Iranian provocations could result in miscalculation and trigger an armed confrontation in the Persian Gulf.

In another dangerous provocation, the top Iranian military official hinted earlier this year that the country’s naval forces would use speedboats manned by “martyrdom-seeking combatants” against the U.S. Navy in case of a naval warfare in the Persian Gulf. “These boats are not just a piece of equipment; they are a culture,” Major General Mohammad Hossein Bagheri, the chief of staff of the Iranian Armed Forces, said at a conference on speedboats in Tehran.  “The combatant that mans it is inspired by faith and trust in God and the martyrdom-seeking spirit of Ashoura [a major religious commemoration of the martyrdom of Prophet Muhammad’s grandson at Karbala]. He shuts his eyes to worldly attractions and steps into jihad [holy war] against the infidel front. He is ready to sacrifice his life,” Bagheri added.

Bagheri’s remarks indicated that to counter the U.S. naval supremacy in the region, Tehran is employing “swarm tactics” and has put increased emphasis on fast-moving vessels that could inflict severe damage to U.S. naval forces in a potential war. In the past, the I.R.G.C. has blown up large target vessels mimicking U.S. aircraft carriers in mock exercises by missiles and swarms of Iranian gunboats in the Strait of Hormuz.