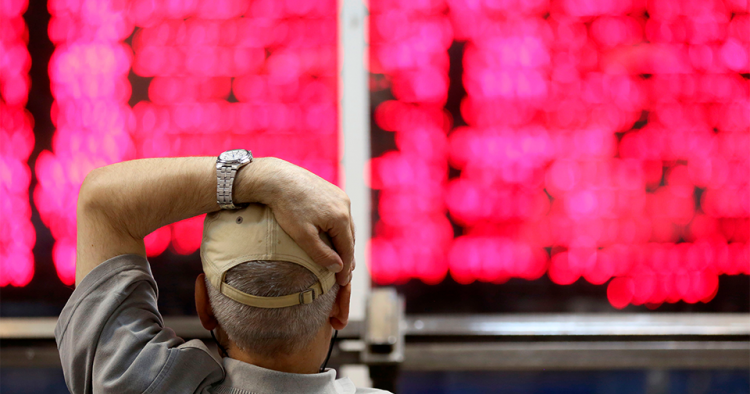 Following the outbreak of the COVID-19 pandemic, the Tehran Stock Exchange (TSE) took a different path than the rest of the financial world. As markets around the globe plunged, the TSE soared to new heights. In the first four months of the Iranian fiscal year (March 20-July 21), the value of trades increased by 625 percent as compared with the corresponding period a year earlier, and the market hit a record high in early August. In this bull market, even loss-making companies among the roughly 1,000 firms registered on the exchange saw their share prices rise. The TSE lists 500,000 active traders and a total of 12 million registered to buy and sell stocks — equal to around one-seventh of Iran’s 82 million people.

The fear of a bubble that could burst at any moment has captured the public’s imagination, particularly since the index began to tumble from its peak in early August, falling sharply in the following weeks and losing around 20 percent of its value over the course of a month. The government has had to come out with a simple message about the nature of the stock market: it is about investing for the long run, not a get-rich-quick scheme. On Sept. 8 it went further, pledging to invest 1 percent of its sovereign wealth fund, the National Development Fund, to shore up the market. Nonetheless, the story of the TSE is not primarily one of a financially unsavvy public. It is rather about the extreme measures a desperate government is willing to take to make ends meet.

The government’s role in the stock market

Most of the companies issuing stock on the TSE are government-owned. The revenue generated from the sale of stock in these companies as well as the tax on transactions (0.5 percent of the sale price) are two increasingly important sources of income for the government as it seeks to cover the annual budget deficit.

Following the U.S. withdrawal from the 2015 Iran nuclear deal — officially known as the Joint Comprehensive Plan of Action (JCPOA) — in May 2018 and the reimposition of American-led sanctions that November, the Iranian government faced a 38 percent budget deficit for FY2018-19 (March-March). Not only was Iran unable to export its oil as before, but it also received less revenue from what it could sell thanks to the plunging price of crude oil on the global market. By one estimate, the government is currently running a $200-million deficit every week.

The government of President Hassan Rouhani has identified three options to tackle the deficit:

In the last two years, the Rouhani government has been able to cover 7 percent of its fiscal deficit by selling government assets on the stock market, some analysts have estimated. The government is also considering selling crude oil on the local exchange to reduce its deficit even further.

Many of these so-called “private” companies are owned and managed by institutions that are either controlled by Supreme Leader Ayatollah Ali Khamenei, the Revolutionary Guards and organizations affiliated with it, the police force, the regular armed forces, or top state foundations like the Foundation of Martyrs and Veterans Affairs, Mostazafan Foundation, Astan Quds Razavi Foundation, SETAD, or the state-linked retirement funds.

In many cases, not only do these entities not pay taxes, they also use connections to state agencies to profit financially and are extremely hard to compete with without having political ties. According to 2016 data from the Iranian Parliamentary Research Center and the Court of Audit of Iran, only 16 percent of state-owned companies privatized on paper were actually privatized.

The stock market’s influence on society

In July, the National Statistics Office announced that 15 million people in Iran have obtained a “stock code” necessary to enter the market. This is in addition to the 49 million who have Edaalat (“Fairness”) stocks, which are shares in several governmental companies sold to low-income people. As a result, a large percentage of the Iranian population is now impacted by the performance of the country’s stock market. Many Iranians, whether seeking a quick profit or as a way to beat the rising inflation rate, have sold their assets, both liquid and illiquid, and bought shares on the exchange. Following the U.S. withdrawal from the JCPOA, Iran's inflation rate shot from 8 percent to more than 42 percent, and it is projected to top 34 percent in FY2020-21 (March-March).

The growth of liquidity in the country and the beginning of the devaluation of the Iranian rial led people to put their money into purchases of foreign currencies, gold, and real estate. Government measures like lowering bank interest rates and potentially imposing taxes on vacant homes further motivated people to invest in the stock market. The government has been accused by critics and the public at various points of manipulating the fluctuations of the exchange rate to cover its budget deficit. Even now, the government seems to be contributing to the stock market boom, possibly with an eye to generating revenue.

At one point, the government was able to make up for part of its budget deficit by manipulating the exchange rate bubble from the sale of oil revenues. Previously, taxes and higher gasoline prices were the two main sources of government revenue following the reinstatement of the oil export embargo. Using these measures, Iran has been able to survive in the months since the reimposition of U.S.-led sanctions on the country.

But the situation is precarious, the recent drop in the TSE has investors eyeing the exits, and a sudden nosedive will surely result in widespread public anger, if not outright unrest. Iran witnessed nationwide demonstrations in 2018 and 2019 that led to the arrest of more than 15,000 people and the killing of over 1,500 civilians. Economic factors played a role in both cases, including anger at rising prices, while the 2019 protests began with localized demonstrations by people who had lost their deposits in several private banks, before later spreading nationwide.

Amid the financial difficulties, the government’s priority has been paying the salaries of government employees and retirees, military and law enforcement agencies, and workers at state-owned companies, along with the military budget. The people who participated in the rallies and demonstrations in 2018 and 2019 were primarily from the lower echelons of society, which bear the brunt of Iran’s economic woes, including inflation, unemployment, low incomes, and non-timely payment of wages.

But many different sections of society are invested in and impacted by the stock market — from the people who sold their houses and cars, to the villagers who sold their livestock to purchase shares. While it would be a credit to the government if its plan to expand involvement in the stock market through encouragement and extensive advertisement succeeded, it could also become a great liability if the market continues to drop or there is a sudden crash. In the latter case, the whole government will have to answer to millions of people.

Potential unrest among this broad spectrum of society, alongside the already disaffected lower and middle classes, is like a time bomb. The government has two options for dealing with the issue, or at least delaying it. First, it can push for more people to join the stock market to continue its expansion. Second, it can sell more profitable and privileged state-owned companies on the bourse. These two measures could give the government time to wait for the results of the U.S. presidential election in November. The Iranian government is evidently confident of President Donald Trump's defeat, the return of the next U.S. administration to the JCPOA framework, and the removal of sanctions.

If the American sanctions on Iran continue, however, the Iranian state will likely be looking at new and more aggressive ways to raise revenue. In a recent example of what might be in the pipeline, a member of the Majlis claimed that Iranians keep some $35 billion in their homes. Mohammad Hossein Farhangi, a deputy from the city of Tabriz, urged the Central Bank to give Iranian households incentives to bring their savings back into the marketplace. Farhangi and other hardliners make it sound as if the only reason why Iranians do not invest their savings is because of a lack of incentives from the Rouhani government. This massively oversimplifies the problems facing the Iranian economy. It is not about whether it is a Rouhani government or a different one that is in charge. The incentives that Farhangi is asking for would be almost impossible for any government in Tehran to provide under the current conditions. The only “incentive” that can be offered is to threaten to punish people if they hang onto their money, which is basically what the Rouhani government has been trying to do. It is now illegal for Iranian households to keep more than €10,000 at home unless they have permission from the authorities.

In short, the average Iranian investor has nowhere else to go with their rapidly depreciating rial savings. The Iranian currency has lost some 30 percent of its value in the last three months alone, which is why there is a huge move by Iranians to convert their money from rials into dollars. Another $20 billion has left the country as Iranians purchase property in Turkey and Cyprus, in an effort to safeguard the value of their savings. Investing in the stock market is another way to do so while also hoping for some return. While the government and state-affiliated entities would benefit from continued growth in the stock market and the expansion of Iran’s investor base as they look to raise revenue, it is also a risky proposition. The market correction in recent weeks has made that all too clear, and they surely know that a sudden stock market crash in Iran is a guaranteed recipe to bring the restless Iranian public back to the streets.

Mohammad Hossein Ziya is a strategic consultant and researcher involved in political and social research, election analysis, and social media campaigns. He has been the chief editor of Saham News since 2010 and is a Non-Resident Scholar with MEI's Iran Program. Alex Vatanka is the Director of MEI’s Iran Program and a Senior Fellow with the Frontier Europe Initiative. The views expressed in this piece are their own.