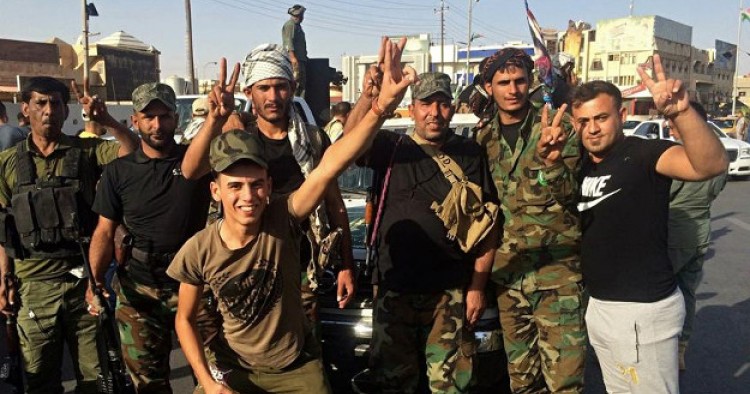 A senior Iranian official praised the Iraqi forces and Tehran-backed Popular Mobilization Forces (P.M.F.) for seizing the disputed province of Kirkuk and “thwarting” the Iraqi Kurdish leadership’s push for independence. Ali Akbar Velayati, a member of Iran’s Expediency Council, accused Masoud Barzani, the president of the Iraqi Kurdistan region, of advancing Israeli agenda in the region. “Barzani’s, and behind the scenes Israel’s, objective was seizing Kirkuk’s oil wells in favor of Israel. For years, no group or minority in the region had proudly raised the flag of the Zionist regime (but the Kurdish region’s authorities recently did),” said Velayati, who is a senior aide to Supreme Leader Ali Khamenei on international affairs. He made the remarks after Iraqi armed forces, backed by Popular Mobilization Forces, took control of the disputed city of Kirkuk on Monday.

Comment: Iranian officials and analysts continue to label the Iraqi Kurdish leaders’ bid for independence as an “Israeli project” aimed at countering Iran’s influence in the region. Grand Ayatollah Hossein Nuri Hamedani, a senior Iranian cleric, said last week that Tehran would not “allow a new Israel to take shape in the region.”

An article in Fars News Agency, which is affiliated with the Islamic Revolution Guards Corps (I.R.G.C.), echoed a similar view. “The Zionist regime is permanently vulnerable as it lacks a strategic depth. Therefore, a logical option in this regard is to introduce new territories for its continued existence in the region,” argued the piece entitled “Israel Needs a Country Named Kurdistan.” The article opined that Israel is worried about Iran’s growing influence in Iraq and Syria and is therefore hatching a new “plot” in northern Iraq to push back against Tehran and its allies. “The independence of Iraqi Kurdistan and a government based on Zionism thought process in charge of oil resources in Kirkuk could serve as a guarantor of this regime’s existence. Iran’s growing power alongside the axis of resistance and their victory over Daesh and Takfiri terrorist groups have pushed the Zionist regime more than any time before to execute the project of dividing regional countries.”

It was against this backdrop that Major General Qassem Soleimani, the head of Iran’s elite Quds Force, reportedly traveled to Iraq to mobilize the Shiite militia forces to help Baghdad retake control of Kirkuk.

After Israeli Prime Minister Benjamin Netanyahu declared support for the Kurdish independence, Iranian leaders found another reason to oppose the referendum. They argue that Israel, with U.S. support, aims to create a client state in northern Iraq against the “axis of resistance” – a term Tehran uses for its alliance with Shiite state and non-state actors in Syria, Iraq, Lebanon, Yemen and beyond. “The Zionist regime and the world Arrogance [U.S.] are behind this,” cautioned Major General Hossein Bagheri, the head of the Iranian Armed Forces.

Iranian-backed Iraqi militia groups deployed forces to southern parts of Kirkuk, according to Iranian and Arab media. Ahmad al-Assadi, a spokesman of the Popular Mobilization Forces, claimed the aim of the ongoing military operation in Kirkuk was to recapture all regions that were under the control of the Iraqi federal government before the rise of the Islamic State in 2014.

When Iraqi forces lowered the Kurdish flag and hoisted the Iraqi one in Kirkuk today, several leaders of Iran-linked P.M.F. groups were present.