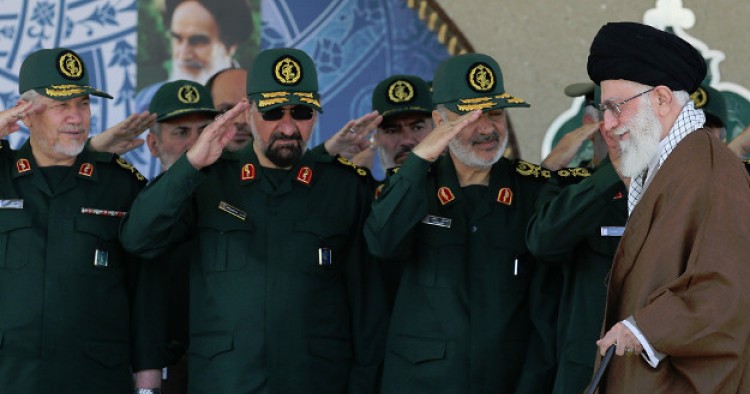 A rare video circulating on Iranian social media shows a university student strongly denouncing the Iranian regime’s acts of oppression at home as well as costly military engagements abroad at the expense of domestic priorities. “Mr. Hassan Abbasi: Your theory is the theory of terror and horror and exporting arms and war. Your theory is supporting dictator and murderous Bashar al-Assad,” the student said to applause from the audience at the Azarbaijan Shahid Madani University. Abbasi – who is the head of an Islamic Revolution Guards Corps (I.R.G.C.) think tank called Center for Borderless Security Doctrinal Analysis – was a guest speaker at the university in Tabriz, the capital of East Azerbaijan Province. “Yes, your theory is playing with national and religious emotions of the people, and defending non-existent shrines in Homs and Idlib. What shrines are there?”

He continued: “Hassan Abbasi: You theorize terrorism. Your theory is to climb other countries’ embassies. Your theory is to spend the country’s budget on the Lebanese Hezbollah. Hassan Nasrallah himself said their weapons, salaries, food and even their underwear are provided by Iran’s budget… We will neither forget nor forgive your betrayals and crimes.”

His bold criticism was not restricted to the Iranian government’s meddling in foreign countries. He also lambasted the regime for the 1999 mass executions and continuing acts of “torture and imprisonment” of political activists.

Comment: The student’s fiery anti-regime speech in front of an I.R.G.C. officer indicates that many Iranians have run out of patience and are risking their lives to counter the Iranian leaders’ narrative that the I.R.G.C. fights in Syria and Iraq in order to preserve Iran’s national security. An opinion survey published last November showed that support for the Iranian regime’s involvement in the Syrian war had declined from 90 percent in 2014 to 24 percent in late 2016. As shown in this video, many Iranians now openly question the moral and strategic wisdom of a costly war in support of a brutal dictatorship in Syria. Iranian Sunnis, in particular, have recently increased their criticism of the Iranian government’s sectarian war in Syria, and many have been arrested in Khuzestan and Sistan and Baluchestan Provinces.