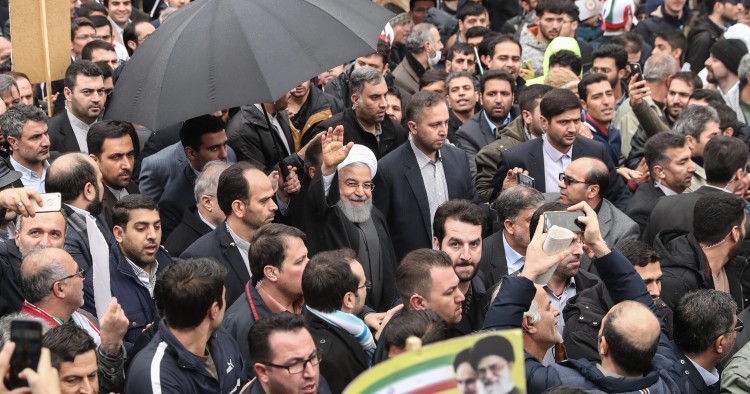 As Iranian leaders celebrate the 40th anniversary of the Islamic Revolution, the country’s economic challenges have reached a crisis point. Inflation is nearly 40 percent, the Iranian currency has lost more than 70 percent of its value over the past year, more than one-third of university graduates have no job, and ordinary Iranians’ purchasing power has seen a double-digit decline lately – triggering antigovernment protests across the country, including in rural areas traditionally supportive of the regime.

The 1979 revolution promised to uplift the downtrodden (mostazafin), but with more than 30 percent of the Iranian people living below the poverty line and ordinary Iranians lining up for hours to purchase subsidized meat, it is clear that the revolution has failed to deliver on its economic pledges.

In 1977, Iran’s economy was 26 percent larger than Turkey’s and more than double the size of South Korea’s. In 2017, however, Turkey’s GDP was more than twice as big as Iran’s while South Korea’s was seven times larger. Class divisions are also deepening as the government has reduced subsidies and the elites continue to enrich themselves.

Iranian leaders acknowledge the dire situation. “We’re facing the biggest economic pressure since the revolution,” President Hasan Rouhani warned in a speech commemorating the revolution. But instead of carrying out long-overdue reforms to tackle the corruption and mismanagement that have stifled Iran’s economic potential since the revolution, they blame all problems on sanctions. “Today, our problems are mostly because of pressure by America and its followers,” Rouhani said. “Instead of condemning America, one should not reprimand the dutiful government or the great Islamic system.”

But Iranian leaders can no longer satisfy people’s growing economic grievances by externalizing the problems. While hundreds of thousands of people today took to the streets to participate in government-organized rallies to renew allegiance to the regime, others protested with placards carrying slogans like “No to Embezzlement,” “No to Profiteering,” and “No to Elitism.”

Egypt’s political climate has been rather turbulent of late. On Feb. 3rd of this year, a coalition of parliamentary representatives submitted a proposal for constitutional amendments to the floor. Those amendments are sweeping in scale, dealing with changes to the presidential term limits, changes to the role of the army, granting the military authority to “protect the constitution and democracy,” increased parliamentary representation of minorities, the reinstitution of the upper house of parliament, and changes to the selection of the heads of all branches of the judiciary.

There’s a process to be followed. Under Article 226 of the constitution, any amendment must be requested by either one-fifth of the members of the House or by the president himself. Any such proposal is then submitted to the general floor of parliament for review, where a simple majority of must agree to let the amendment be put up for debate. The amendment must then be approved by at least two-thirds of the legislature before being sent to voters for a popular referendum, at which point a simple majority will decide whether or not it passes. If it does pass, it would be the second amendment to the constitution in five years.

The amendments concerning the presidential term limits are currently getting the most attention.

The constitution currently states that the president is elected for a period of four years, renewable for one term only. It also contains constitutional provisions stating articles on re-election of the president “may not be amended, unless the amendment brings more guarantees.” However, since early last year, there have been persistent calls by parliamentary members to amend the constitution to extend presidential term limits. The current proposal on the floor would extend presidential terms to six years, rather than the current four, and allow presidents to be reelected once (i.e., to serve a total of two terms). This would make the current president, Abdel-Fattah el-Sissi, eligible for reelection when his term is up in 2022 and might potentially keep him in his position through 2034.

While all the amendments are of great significance, attention should be paid to potential presidential oversight over the judiciary, long a largely independent thorn in the sides of various executives. The amendments on the table would authorize the president to appoint the heads of various judicial bodies and the prosecutor-general, and to chair a Supreme Council for Judicial Bodies and Entities. Considering that Article 186 of the constitution firmly enshrines the independence of the judiciary, amendments that allow a sitting president to exercise control over appointments for all judicial bodies may seriously impact that independence. As a compromise choice for prime minister, Adel Abdul-Mahdi has taken on the role without the strength typically associated with the head of a leading electoral list. Yet, his credibility as a national figure who has worked to maintain principled and moderate positions toward the realization of democracy in the new Iraq may provide him with the moral standing to compensate for his deficit of political power. In his first 100 days as prime minister, Abdel-Mahdi has had to face unrelenting demands to address difficult issues: unsound governance and dysfunctional politicking; the acute inadequacy of basic services; rampant corruption; and the aftermath of the defeat of ISIS — both in terms of preventing its resurgence and in addressing the deliberate material and social destruction it left behind.

By the nature of the way in which he took office — with the numerous competing lists settling on him as the least common denominator — Abdul-Mahdi cannot be expected to address the difficult question of whether to incorporate the Popular Mobilization Units (PMUs) into the armed forces or to dissolve them; both prospects have been vocally rejected by PMU leaders. Abdul-Mahdi, instead, is faced with the need to balance multiple binaries: the conflicting relationships with the United States and Iran; the fragile entente among the lists that anointed him prime minister toward the filling of empty ministerial positions, among other urgent concerns; the opposed understandings of the Kirkuk situation and Baghdad’s charged relationship with Erbil; the growing centrifugal trends, in Basra and the south, as well as in Mosul and the north; as well as the simmering public frustration with the lack of political and administrative progress.

Simply stated, Abdul-Mahdi does not have at his disposal the tools to constructively address all of these issues. The measure of his achievement — uneasily met at the 100-day mark, and likely to be tested repeatedly in the days ahead — is his ability to avoid having any of these precarious situations degenerate into an out-of-control crisis, in anticipation of a path, not yet evident, for more forceful engagement in the future. Then again, given the low expectations, Abdul-Mahdi may yet be able to surprise.