Iran’s lit fuse does not necessarily favor the US 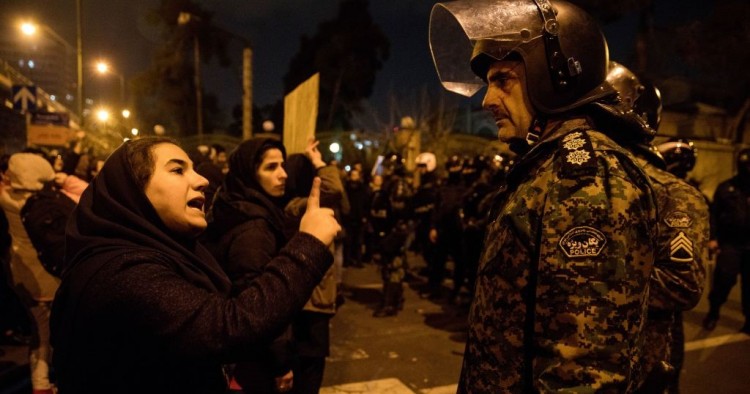 hawks and liberals are interpreting developments as validating their positions. Hawks are claiming victory for “maximum pressure,” arguing how the US strike against IRGC Quds Force Commander Qassm Soleimani frightened the now weakened ruling clerics into submission. Liberals argue that Iran took the high road, demonstrating a willingness to respond to incentives and negotiate. In turn, they advocate engagement, restraint and concessions. Both share President Donald Trump’s mistaken belief that Iran’s struggles will necessarily produce favorable results for US interests. Such an outlook dangerously overlooks nationalism, history and fundamental Persian traits.

Tehran’s clerical leaders are likewise arguing among themselves over how best to mitigate November’s fallout and this latest escalation with the US. Their job was made all the harder by the IRGC’s downing of a Ukrainian airliner. Juxtaposed against the brutality he earlier unleashed, Ayatollah Ali Khamenei had approved the term “martyr” for those “caught in crossfire,” while encouraging “Islamic mercy” from courts judging demonstrators “who had not pillaged and burned public property.” Such gestures reflected the regime’s acknowledgement that it was hardly out of the woods even before the preceding week’s rollercoaster that began with national unity until an IRGC surface to aircraft missile boomeranged those sentiments against the regime. The fuse now lit, the speed and severity at which it burns, however, remains as unclear to Tehran’s leaders, who seek to extinguish it, as it does Washington’s, who expect a coming explosion to topple the aging cleric cabal.

Iran’s theological leaders are faced with selfimposed limitationsircumstances, for example, that China’s communist government was not obliged to contend in restoring “normalcy” after Tiananmen Square. While its demonstrations were likewise nationwide, China’s death toll was concentrated in the capital and the victims largely students. China also had a stronger economy to mitigate much of the economic with which Tehran must contend. But China’s leaders had room to maneuver with concessions that they could firewall from political reforms without undermining communist party dogma and control. Iran’s clerics, , don’t have the luxury to compromise the strict religious interpretations that justify their policies and economic priorities. Concessions concerning women’s rights, attire and even canine ownership represent a slippery slope.

Months prior to the fuel price increases which ignited the recent uprising, Iran’s Ministry of Intelligence and Security (MOIS) and IRGC were already contending with evidence of dissent. The most alarming found not among the typical sources of progressive opposition or within the Arab, Baloch and Turkomen minorities the regime already scrutinized, nor even the frustrated and unemployed youth. Rather, the vulnerability was among those who had themselves once embraced the theological regime’s fundamental values and shared its obsessive belief that American meddling was behind of the country’s ills.

Cracks among those loyal to the revolution’s principles had developed owing to a sense of betrayal a regime that could dispassionately subject its own people to deprivation and brutality. Such one time and still outwardly loyalists struggled with the questionable sacrifices that Iran’s leaders justified in the interest of their own hold on power.

November’s nationwide protests and the regime’s brutal response was felt across demographic lines. The frustrated youth who burned banks and vilified the ruling clerics were not restricted to the existing opposition. The parents, siblings and friends who buried those whose bodies were returned, or want for news of loved ones still in detention, have relatives in every walk of Iranian life. Such circles extend to Iran’s armed forces, intelligence agencies, police, and ministries where those believed most loyal to the regime are expected to be found. Although Soleimani’s targeted killing has given the regime a breather, the growing divide between it and its subjects has not suddenly evaporated. November’s indiscriminate use of force might not trigger a broader uprising that includes security forces tomorrow or in the weeks and months ahead, but the seeds have been planted. As Americans know all too well, Iranians have long memories.

A little noticed July 22, 2019 MOIS press release alleged another round of spy arrests in which the ensuing exchange of barbs between Tehran and Washington was more revealing than the announcement itself. Iranian Intelligence Minister Mahmoud Alavi concurrently announced the airing of a documentary chronicling Iran’s counterespionage successes in which he is quoted as saying that President Trump was making “wrong and bizarre” decisions about Iran. Alavi suggested that the miscalculations may result from “a lack of access to reliable intelligence.” In turn, President Trump that the Iranian report was “totally false. Zero truth. Just more lies and propaganda…”

Whatever the facts behind the press release and despite Alavi’s boasts regarding Iran’s counterintelligence successes, life for the MOIS and IRGC just became a great deal harder. Despite whatever cycles of arrests claimed in the Iranian press and enmity for the US, CIA has been able to build stables of Iranian agents. That should be more worrisome to the Iranian regime than satisfaction those agents it has identified. Where the clerics see the public exposures as a deterren, it underestimates their people’s nature and could boomerang.

Iranians are loyal to their country, not necessarily those who rule, particularly when the mandate is illegitimate. They can be risk takers and non-conformists fiercely committed to Persian values. Extending the aggrieved now beyond traditional sources of dissent to others deeply placed within the regime will vastly expand the potential of those seeking retaliation or change from within. Some might indeed be more receptive to cooperating with foreign intelligence services, others will undermine the regime’s grip from the inside. But once committedworking with others on the inside or a foreign intelligence service, another obstacle can be persuading them to focus on priorities which do not align with their own belief in what we need to know or how to safely accomplish their tasks. not a revolutionary concept, but Iranian officials do not like to be told what to do and I have observed that their outlook and confidence as agents, leaders or negotiators can at times get the best of their judgment.

Whether or not deliberate, the Trump administration’s schizophrenic actions and messages erratically pivot between regime change and behavioral influence. And that is both to Iran’s advantage and peril. The clerics in Tehran have no daylight among them in seeking to preserve their regime at any cost regardless the price in Iranian blood and treasure. As evinced again by a telegraphed missile strike in which the Iranians pulled their punches, they are at ease with provocations that push the US to the edge of the envelop but not reckless enough to instigate an allout war. Such calculus is put at risk by US inconsistency, unpredictability and a lack of cohesion among its tools of power.

For two countries so obsessed over one another, their leaders’ respective decision making appears curiously driven less by unbiased intelligence and more by emotion. Foreign imperialism left Iran with deeprooted scars. Iran’s history, culture and social views permeate how they interpret American actions, assessing the world through the prism of an existential U.S. threat. This fixation is both a strength and a weakness. Fear of annihilation is rather motivating and unifying. It sets priorities and accounts for generous resources being aligned against the problem. Iran’s national tools of power are, to put it mildly, “all in” when it comes to defending the clerical regime.

There is an old Persian adage that Iran is “an easy country to devour, but hard to digest.” Intellectually at least, I suspect Iran’s rulers believe at least one thing President Trump says is true. While prepared to strike Iran, he has no appetite for an invasion and ensuing occupation. For the clerics, however, America’s economic warfare is a far graver threat to their rule than that which our military poses. To them, the war is in full swing.

Americans also bear 40 years of scars and a sense of unsettled scores. This includes the 444day mbassy hostage ordeal, hijackings, kidnappings, suicide attacks across Beirut, Kuwait, Saudi’s Khobar Towers, and the devastating losses from the IRGC’s introduction of (EFPs) used so effectively against our service members in Iraq. Neither side is satisfied at having appropriately achieved justice nor fully appreciates how such sentiments influence the other’s calculus. Sun Tzu would be terribly disappointed.

Outside of occasional flareups, Iran is not the first thing on US policy makers’ minds when they wake. US. focus, resources and priorities lack the same alignment or passion. Apart from the realities of its far broader international interests, domestic considerations, American politics and a free press exert far greater influence on the US. The reality is therefore that unlike Tehran’s ruling clerics, not even President Trump is “all in.”

America must likewise be “all in.” Iran’s clerical leaders will not go gently into that good night. Whatever fear they might have of U.S. military power or the CIA, and it is considerable, will be overtaken by desperation. While hawks believe Iran’s internal revolt needs just a bit more of a push, and liberals await change to come organically through the rise of a yet revealed politically progressive messiah, Iranians who resent their leaders and seek change are not necessarily well disposed to the US.

Prior to committing the country inextricably to the blood and treasure confrontation and containment might cost, the White House should also consider the old adage of being careful what you wish for. Iranian ill will towardthe US imore pervasive today than at perhaps any time since the 1979 revolutionhe notable exception being the deep emotional wounds across all walks of Iranian society from US support Saddam Hussein during the Iran-Iraq War.

There’s barely a segment of Iranian society naturally well disposed towardthe US. The Baloch, Turkmen and Sunni Arabs are not natural US allies, their leading activists more aligned with al-Qada and ISIS than the West. The Kurds feel abandoned and betrayed. And even those Shi’a desperate for economic and social reforms perceive US sanctions as particularly cruel. Among other areas of impact to the populace, they cite US sanctions targeting the medical sector and those denying visas that divide families and prevent students from studying in America. Like the unrealized assurances Washington gave in 2002 that Iraqis freed from Saddam’s rule would greet Americans as liberators, we should expect no better in Iran.

Critics will understandably oppose continued counsel for patience. Iranian behavior certainly presents a current and significant threat to US security and its international interests. But the natural American tendency to rush is ill suited to the region, and particularly Iran. There is room to advance our goals by leveraging what’s available to us now and holistically using all the tools of American power to influence the longterm objectives we seek. It requires greater appreciation of the factors which shape the outlook of both Iran’s leadership and its increasingly agitated populace.

History, culture and nationalism matter, and can likewise be manipulated in the more Daoist sense of using the river’s natural flow to guide it to where you wish it to run in harmony with its inherent tendencies. But then again, having been a spy for over 34 years, I’ve found manipulation based on good assessment far more effective and less prone to blowback than confrontation. It’s time the resident and his advisors consider doing the same.

Douglas London is a retired Senior CIA Operations Officer and an Adjunct Associate Professor at Georgetown University’s Center for Security Studies. Over the course of his 34 years in CIA’s Clandestine Service, Mr. London served in the Middle East, South Asia, Africa and Central Eurasia, including several Chief of Station assignments. Mr. London retired at the end of 2018, his last position as CIA’s Chief of Counterterrorism for South and Southwest Asia. You can follow him on Twitter @douglaslondon5. The views expressed in this article are his own.