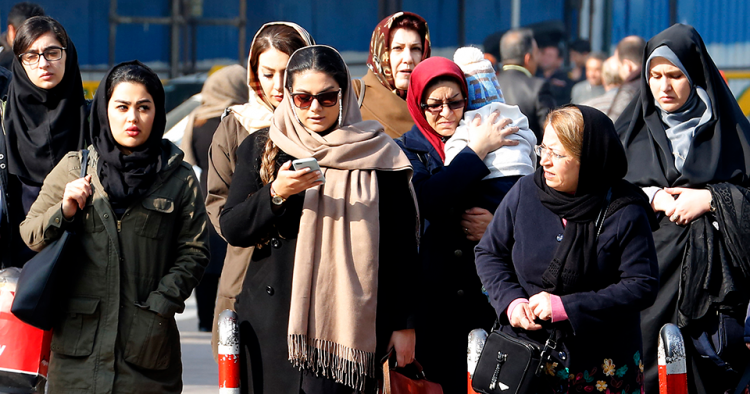 The ripple effects of the 2017 “#MeToo” movement shook Iranian social media this week as rape allegations were levelled against some of the country’s most prominent figures. The movement, which has led to the arrest of at least one alleged rapist so far, has triggered a broader conversation around sexual violence and harassment — an unspoken topic in Islamic Iran.

In the past few days the hashtags for rape and sexual assault in Persian, “#tajavoz” and “#tarozjensi,” have been among the top 10 most widely used on social media, with several celebrities in the entertainment industry and a well-known painter and art instructor accused of committing acts of sexual violence against women.

Tehran Police Chief Gen. Hossein Rahimi said on Tuesday that authorities had arrested Keyvan Emamverdi, a former Tehran University art student and bookstore owner, accused of raping several students. Dozens of survivors have emerged in recent days and named him on social media, particularly on Twitter, saying he pressured them to meet privately, before drugging and sexually assaulting them. At least 20 women joined in to expose Emamverdi as their assailant.

This is the first time Iranian authorities have responded to rape allegations publicly. In the past, rape cases were often presented as if sexual assault happened rarely or was the fault of the victim. Rahimi said the arrest was made after "intensive investigations" that followed women speaking out against Emamverdi on social media. He urged other survivors to lodge complaints with the police or through attorneys, assuring them that their identity would be shielded to protect them from stigma.

The campaign appears to have given courage to survivors and their supporters to reveal their own experience on social media, determined to end sexual harassment and violence. “Topics such as sexual assault and rape are common conversations among women,” wrote JeivaJ on Twitter. “One woman tells her account and the others say how it happened to them too.”

The campaign began after Sara Omatali, a reporter, wrote on Twitter how she had been assaulted 14 years ago by a celebrated painter, Aydin Aghdashloo, after she went to his office to interview him. Aghdashloo was naked with a brown robe over his shoulders, she wrote. He hugged her and pressed his lips against hers. She fought to release herself, she wrote, without elaborating what happened next. Later, after she ran out onto the street, he joined her as if nothing had happened. He showed her around while she recorded his voice for a story and wrote about him.

Her account triggered a barrage of allegations against Aghdashloo and other high-profile men. A Pandora’s box has been opened, but the situation remains in flux and the outcome is unclear.

The movement has grown to include both men and women. It is difficult to verify the identity of some of the social media users, but many men have revealed they were raped as kids. “If I was going to speak of #rape, prove it, and get away with it, then I had to explain that I did not become gay because I was raped,” wrote one male user on Twitter. Homosexuality is punishable by death according to Iranian Islamic law and so gay men and women are reluctant to come forward with their stories.

There are no official statistics on the number of reported sex crimes in Iran. The government has not published any official data on conviction rates where women have been able to prove their cases in the past. The topic is often ignored and sometimes women are punished for being involved in an extramarital relationship, which is considered illegal under Islamic law. Those who have come forward have paid dearly.Twitter users referred this week to the case of 28-year-old Zahra Navidpour, who died mysteriously in January 2017 after accusing Salman Khodadadi, the chairman of the Parliament’s Social Commission, of raping her. Navidpour said she received death threats after accusing Khodadai, but as is the cultural norm, some Twitter users still blamed her for being raped. One user called Sasankmali asked, “Why had she put herself in a quiet and private place where she could be raped?” He added, “That should become clear before the truth could be discovered.”

Rape victims rarely get support even if they seek help. As in many other cultures, survivors in Iran often feel ashamed even if the perpetrator is charged. Therefore, many victims of rape, sexual assault, and harassment remain silent in order to avoid public humiliation or even punishment. In October 2018, Iran’s judiciary hanged Zeinab Sekaanvand Lokran in Urumieh Prison in West Azerbaijan Province on murder charges. Sekaanvand, who was 24 when she was executed, spent almost a third of her life in detention. In February 2012, she was arrested and put on trial over the murder of her husband, a crime that took place when she was 17 years old. She had reported being raped by her brother-in-law and tortured by police after her arrest. What’s especially chilling about Sekaanvand’s case is the number of points at which the Iranian authorities could have intervened to help her. She had reported the abuse she suffered and spoken out, yet she was ignored.

Those convicted of rape in Iran can receive a death sentence. Farhad Salehi Jabehdar, 29, is currently on a death row in Karaj Prison in Alborz Province for raping a 10-year-old boy. But Iran’s orthodox Islamic culture has turned a blind eye to sexual harassment and violence and silences a public discourse about it. The perception is that if something is not spoken of publicly, it has not happened.

The state-run media often reinforces the dominant traditional norm by claiming that the higher number of reported cases of rape in Western countries is the result of their lack of morality. It often glorifies Iran’s strict rules governing women, such as the punitive measures for refusing to veil or for engaging in extramarital relationships, as necessary to maintaining a so-called moral society. But now, women are speaking out against the rules as well. A Twitter user wrote that an Iranian girl is taught from a young age at school that if she shows her hair, wears short clothes, does not cover her body from head to toe, or is with a man under the same roof and behind a closed door and is raped, it is her fault. “This is how in our culture the victim is guilty! The rapist is innocent,” added Farzan Vatan.

Yet, the campaign reflects the magnitude of the problem and the deep crisis of moral legitimacy in Iranian society that has silently wreaked havoc. It is too early to tell if it will change anything on a broader social level or in the laws, but it shows that survivors in Iran have finally risen up.

Pedram Soltani, an Iranian entrepreneur, praised the campaign and said that women in Iran have finally found themselves and one another to shift cultural norms. “Women will change the rules of the game and this patriarchal society,” he wrote on his Twitter account.