Iran’s presidential elections are all about the post-Khamenei era 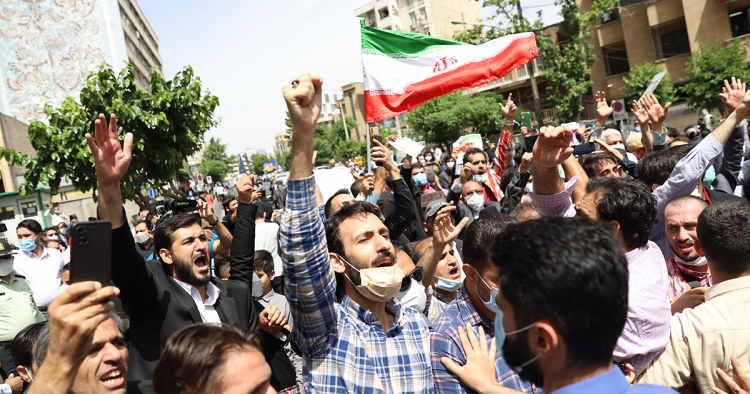 Iran will hold presidential elections on June 18 and despite considerable efforts by the authorities, the battle at the ballot box is set to be a lifeless affair. A solid majority of Iranian voters have by now entirely lost hope that voting makes any difference. Actual turnout could be as low as 20% as compared to the 73% recorded in 2017. Ayatollah Ali Khamenei, the unelected supreme leader who has ruled over Iran since 1989, is not on the ballot. Nor are the Revolutionary Guards, the armed defenders of the Islamic Republic’s theocratic system. These two institutions wield the real power in Tehran, not the Presidential Palace.

And yet, the Islamic Republic is addicted to holding make-believe elections every four years. For the June 2021 elections, aspiring candidates had five days to register. A total of 592 applicants, including 40 women, did so. In about 24 hours, some 93% of them were said by the Guardian Council not to meet the criteria. The 12-man council, which is controlled by Khamenei, decides who can run for office. No woman has ever been allowed to run in the Islamic Republic since 1979. Of the about 40 men that will be considered, all can be expected to be political insiders that Khamenei and the Revolutionary Guards can live with as possible occupants of the Presidential Palace.

In fact, Khamenei approved a last-minute change to the constitution allowing senior military men to run for the presidency, something which they could not do before. Among the candidates to be approved, a majority will come from the ranks of the Revolutionary Guards, including Mohsen Rezai, Hossein Dehghan, and Saeed Mohammad. This is not an institution without its schisms and rival factions, but the broader trend is that as a grouping, the Revolutionary Guards wants to have a more visible presence on the official political scene as a way to safeguard their future interests as the 82-year-old Khamenei’s reign is in its twilight years.

The reformist camp has put forth a number of candidates too, and one or two might be approved to run. This includes Eshaq Jahangiri, the current vice president under President Hassan Rouhani; Mostafa Tajzadeh, a former government official that was later put in prison for speaking out against the system; Ali Larijani, a former hardliner who has moved toward the center and hopes for reformist support; and Mahmoud Sadeghi, an outspoken reformist member of the Majlis (parliament).

The system, after all, likes to pretend this is a competitive election. Even if they are allowed to run, which will likely be the case with Jahangiri and Larijani, reform candidates will not bring voters out like they have in the past. If the reform movement’s core demand has been to curtail the powers of the supreme leader, then its best hope in this election might be its former nemesis, Mahmoud Ahmadinejad.

The former president is shameless but also daring, which is a sought-after commodity in the Islamic Republic’s stale politics. He is one of the very few registered candidates willing to openly blame Khamenei for Iran’s dire straits. That boldness alone will secure him support from various corners and he is by some accounts a front-runner among the minority of Iranians that might come out to vote on June 18. That said, as in 2017, Ahmadinejad will likely again be disqualified from running. After all, the path to the Presidential Palace runs through the Office of the Supreme Leader.

But Ahmadinejad actually wants to be disqualified or even imprisoned, as a number of his closest political associates have been in recent years. This quest for martyrdom is part of his strategy to secure his political fortunes after Khamenei’s death. In fact, Ahmadinejad’s ultimate hope is to break up the duality of politics in the Islamic Republic between “reformists” and “hardliners.” This dichotomy was born with the election of reformist President Mohammad Khatami in 1997, but given the lackluster state of the reform movement, Ahmadinejad has as good a chance as any to upend it. He wants to brand himself as a maverick figure that speaks truth to power and thus can garner support from the largest segment of society, namely disillusioned Iranians.

The list of candidates from the hardline camp is long and includes many military men. A month before the election, the conventional wisdom is that Ebrahim Raisi, the mid-ranking cleric who is the head of the powerful judiciary and came second to Rouhani in 2017, will soon be the frontrunner among hardline candidates. He has in fact sought to cast himself as an “independent,” but that is an incredibly hard sell for him given his political record as a loyal foot-soldier of the hardline faction. Raisi will likely end up with the same type of supporters that he won in 2017, namely those among the diehards, the estimated 20% of Iranians who still believe the Islamic Republic is worthy of continuing.

If Ahmadinejad is barred from running, which is the most likely scenario, Raisi’s main challenger will probably be Larijani. It is very hard to see how the Guardian Council can reject Larijani given the many senior roles he has held in the Islamic Republic since 1979. His supporters claim that Larijani will be Raisi’s main rival and that he is someone who can secure support from both the reform camp and traditional conservatives, which Raisi needs to do well among.

In the meantime, Larijani and Raisi both need other candidates to drop out in their favor, but it is too early to predict how this process will unfold. A race for the top between Raisi and Larijani is likely exactly the sort of outcome that Ayatollah Khamenei’s pre-election engineering was aimed at achieving. Both Raisi and Larijani, and anyone else that might be approved to run, will have to have the confidence of Khamenei. That is why the June 2021 presidential election is above all political theater, but it also provides a glimpse into the kind of fault-lines to expect in the post-Khamenei Islamic Republic to come.

Alex Vatanka is the Director of the Iran Program at the Middle East Institute. His most recent book is “The Battle of the Ayatollahs: The United States, Foreign Policy and Political Rivalry Since 1979.” You can follow him on Twitter @AlexVatanka. The views expressed in this piece are his own.