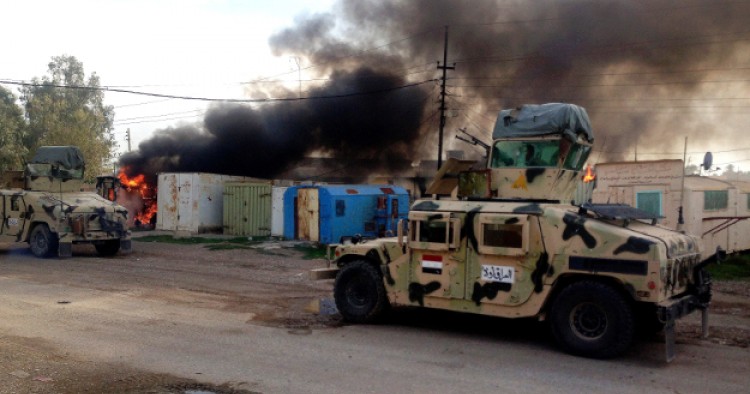 This article is the result of a recent visit by the authors to Baghdad where they met with government leaders, security officials, political party representatives from the various communities, and leaders of ten Iraqi think tanks. A version of this article appeared in the March 10 issue of the Arabic Al-Hayat newspaper.

Despite deep internal divisions, a massive security threat from ISIS, and a fiscal collapse due to low oil prices, the Iraqi government is struggling to move the country forward and deserves urgent support from international and regional players.

The Fight against ISIS

Although much of the Iraqi army collapsed in the face of the ISIS onslaught in 2014, army units, supported by the federal police and Sunni tribesmen, successfully drove ISIS out of Ramadi in December. This has given the government and its security forces new confidence and popular credibility. It has also given them some leverage over the Popular Mobilization Units (P.M.U.), a loosely grouped body of militias and volunteers that halted the ISIS advance on Baghdad in 2014 and forced ISIS out of Tikrit last year.

The government now has its eyes set on Mosul, as it begins preparing for an offensive to liberate Iraq’s second largest city. It prefers the army, the federal police, and local fighters from Mosul and Nineveh take the lead in the fight, but Prime Minister Haider al-Abadi is coming under increasing pressure to find a role for the P.M.U. He is also worried about the role of the Kurdish peshmerga and the Turkish military presence nearby in Bashiqa. The Iraqi government is receiving U.S. military assistance in preparation for this battle, but it is in the Baghdad government’s interest to resist granting the P.M.U. a major role. It also needs U.S. political help with Ankara and Erbil to help ensure the various players are on the same page and do not get in each other’s way.

While the government feels increasingly confident about defeating ISIS, it is aware that liberating towns without quickly and successfully repatriating populations will sow the seeds for a new wave of crises. The government needs international help in clearing liberated towns of IEDs and booby traps, reconstruction of destroyed homes and institutions, resumption of water and electricity services, and local conflict resolution.

There are also increasing risks related to the instability of the Mosul Dam. A breach would put 0.5 to 1.5 million Iraqis in mortal risk. The government just signed an agreement with the Italian firm Trevi to shore up the structure, but the international community needs to put together urgent action to stabilize the dam and protect—or relocate—endangered populations downstream.

If ISIS is defeated in Iraq but continues to thrive in Syria, Iraq will not be safe. Positive developments in Syria, including the severing of the Raqqa-Mosul road and the continued pressure ISIS faces around its declared capital of Raqqa, bodes well for Iraq. While an ‘Iraq first’ strategy made sense a year ago, it is now clear that the war against ISIS must proceed equally urgently in both Iraq and Syria.

As if the war against ISIS was not challenging enough, the government has to contend with a collapse of oil prices that has pushed their budget deep into deficit. Revenues are no longer sufficient to cover public sector salaries of around $4 billion a month and fund the war against ISIS, let alone cover the costs of reconstruction and repatriation. The government is drawing down dwindling reserves, prioritizing public salaries and the war on ISIS. Baghdad is in discussions with the I.M.F., the U.S. government and other institutions to stay fiscally afloat.

Of course, the current Iraqi fiscal situation is not only the result of low oil prices, but also the result of widespread corruption and the doubling of the size of the public sector in recent years. Prime Minister Abadi has promised, and undertaken some, long overdue reforms, but more needs to be done. In the meantime—and until oil prices edge up from recent lows—the government needs urgent financial assistance to avoid further collapse and to prosecute the war against ISIS.

Many in Iraq are already looking ahead to the challenges that will face the country after ISIS. One such issue is the fate of the P.M.U. Ayatollah Ali al-Sistani, whose fatwa in 2014 called on his followers to volunteer en masse to fight back ISIS, clearly regards the force as temporary, and wants it to disband when the ISIS threat is dealt with. But many in the P.M.U. want to become an institutional part of the government security structure, alongside the army, and get permanently on the government’s payroll. Some of the ideological groups imagine the P.M.U. as a permanent revolutionary guard, similar to the Islamic Revolutionary Guard Corps in Iran, protecting Shiite dominance in the state against future threats. They feel that the national army has not, and cannot, play this role.

In practical terms, a lot revolves around the details of the National Guard draft law now languishing in parliament. The government has no money to countenance extra layers of expenditure, and many Shiite lawmakers are wary of empowering a force whose leaders could compete with them in future elections. Shiite and Sunni politicians are also divided as to whether the command of this National Guard should be at the federal or provincial level.

A middle ground will have to be found. There are already thousands of Sunnis in the P.M.U., and more will be recruited in the fight for Mosul. These should not be abandoned after the battle, like the Sons of Iraq fighters were abandoned previously.

The Future of Iraqi Unity

But the largest question facing the country is the future of the Iraqi state itself. Can it pull itself together after ISIS, or will the Kurds, Shiite Arabs, and Sunni Arabs go their separate ways? The Kurdish leadership in Erbil seems to have given up on the federal framework and has announced plans to hold a referendum on independence. Sunni leaders are weak and divided between those calling for an autonomous Sunni region with its own budget and armed guard, and those calling for a more centralized formula with more equitable power sharing in Baghdad.

There is also division among Shiite leaders between those who no longer trust the Kurds and Sunni Arabs and are happy to maintain a smaller Shiite-majority rump state from Baghdad to Basra; and others who insist that the division of Iraq is only a formula for new waves of war over contested internal borders and resources.

Indeed, the various components of Iraq need to hang together or they will hang separately. There is enough flexibility in the Iraqi constitution to allow various levels of autonomy and decentralization. If Erbil believes it can achieve independence, then it should do so; if not, it should be encouraged to suspend that process and get back to the serious business of working out differences with the government in Baghdad. International and regional players should encourage Erbil in this direction, and lean on both Baghdad and Erbil to work out their differences.

For Arab Shiites and Sunnis, a renewed attempt at coexistence within the context of a unified but decentralized state is far preferable than an attempt at division that will tear further at the intermingled fabric of Iraqi tribes and families and lead to further conflict. The Shiite-dominated government in Baghdad needs to be more forthright in terms of sharing power, and the new Sunni leadership that is emerging, as Sunnis and Shiite fight together to defeat ISIS, could play an important role in laying the groundwork for renewed trust.

There is an Arabic saying: “you don’t make friends, except after a fight.” Despite the many tensions and conflicts that have afflicted Sunni-Shiite relations in Iraq in recent years, there is no promising alternative to coexistence and power-sharing in the context of a unified and decentralized Iraqi state. Regional players should turn away from the destructive logic of proxy war and use their influence to encourage Shiite and Sunni leaders in Iraq to find accommodation and common ground. International actors can use their influence with regional players in that direction, and help leaders in Baghdad hammer out new accommodations.

Iraqis have shown incredible resilience in the face of massive threats and the country is making steady progress in the war against ISIS. But the Iraqi government still needs urgent help in keeping the precarious state afloat and navigating the complex political, security, and fiscal waters ahead. Iraq should have a bright future, but unless we help it today, the country might sink under the weight of its current challenges.