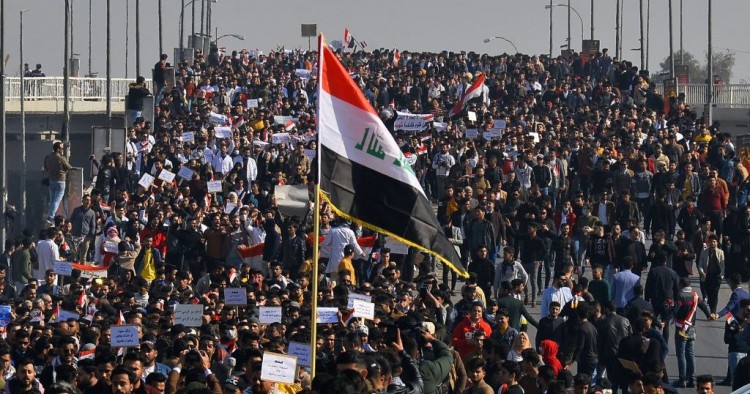 The protest movement in Iraq is now entering its fourth month, amid a broader geopolitical confrontation between the U.S. and Iran that is being played out within the country. Previous localized protests over the years have targeted their anger on one specific governance failure, such as water resources, electricity and fuel, or economic empowerment. Furthermore, they have tended to lean toward sectarian divisions, whereby organized groups have mobilized their supporters to protest in opposition to the government of the day.

The current protests raging across most of the south of the country, however, have remained non-sectarian in their tone and message thus far. There have been attempts to co-opt the protests, for example by the prominent Shi’a cleric Muqtada al-Sadr (threatening the movement periodically with the removal and reinstating of his support as a means to raise political capital), and counter-protests led by the paramilitary Shi’a militias known as the Hashd al-Shaabi that aimed to divide and insert themselves into the protest movement. By contrast, the religious leadership in Najaf, led by Ayatollah Ali al-Sistani, has thrown its support behind the protests — although this is not a major departure from its political positioning on previous protests over the years. The stance of other powerful actors in the south, such as tribal leaders and local government, is unclear and seems to shift in reaction to events on the ground. They appear to remain largely quiet, however, in an effort to preserve the power they have gradually amassed on a local level while also acknowledging the engagement of their own children in the movement.

For its part, the movement itself remains steadfast in its rejection of the political order, and all members of the political elite — a vast network of politicians, political parties, security forces, militias, and religious figures that make up Iraq’s muhasasa (sectarian power-sharing) political system.

The protesters have faced continuous violence that has left over 600 dead and tens of thousands injured — at least according to official, or what some call conservative, estimates. Protests have spread and been sustained in other major cities across the south of the country for weeks, dispersing the focus away from Baghdad but building a cohesive and more durable movement in the process. Meanwhile Iraq’s governance structure has ground to a complete halt. Already stagnating in the post-ISIS era, there is now little to no decisive governance action being taken on a day-to-day basis.

Following Prime Minister Adel Abdul-Mahdi’s resignation in October, political factions appear no closer to deciding on a replacement, despite the expiry of constitutional deadlines, and new deadlines imposed by the presidency, nor are they any clearer on pursuing the agenda for fresh elections and a new electoral system, as demanded by the protesters. The protest movement has worked to insert itself as a major factor in the decision-making over the prime minister’s nomination. The initial reaction in the squares to names floated in the media is now watched carefully. Up until now some political actors — such as Sadr — have also deliberately used the protests to disrupt the traditional political negotiations that are divided along party and sectarian lines.

The protesters continue to call for fresh elections, supporting the electoral law that was passed that shifted a broad proportional representation system to a full individual candidacy system. They believe this change in the electoral system, coupled with a newly constituted Higher Electoral Council, can break up the monopoly of power held by the current parties and create a more representative system. The country is now at an impasse where power shifts daily between the street and Baghdad’s infamous Green Zone, which houses the political chambers of government and Parliament.

This is a remarkably young movement, made up almost completely of those under 25. They remain the bulk of the movement but are periodically joined by their elders — mainly the families of those who have fallen or those protesting, or citizens intrigued to visit protest centers. It is easy to discard the demands of the protesters as a call for economic rights — a common way of analyzing social movements. Consecutive Arab Human Development Reports, as produced by the United Nations Development Programme (UNDP), have given us insights on what drives mass mobilization across the region. As is true across the Middle East, youth unemployment in Iraq is skyrocketing, and conditions imposed by the post-war economy have made life unbearably expensive for many. More pertinently, the continued cycles of violence experienced in the country post-2003 have imposed a significant governance burden. For those who are teenagers and young adults, they have experienced nothing but conflict and growing fractures between communities, imposing upon them a collective trauma that has now exploded into an outpouring of anger and grief.

As a result, the protests have not only surprised the political elite, they have also arguably surprised the protesters themselves. A demand for change, better governance, and a new political system that is both accountable and representative has developed into a growing debate on the very identity of Iraq today. This identity is wrapped in a non-sectarian ideology, posing a real threat to the way power is apportioned and balanced in the post-2003 political order. Although localized to the south — a majority Shi’a-populated part of the country — and despite the genuine safety and security threats that exist in the majority Sunni areas of the country, there are numbers of human rights actors and young protesters flocking to Baghdad each weekend from Anbar, Kirkuk, Mosul and Salaheddin according to anecdotal discussions with activists in those areas.

The protest movement has also been strengthened by a creative streak in a largely conservative and traditional society. Female participation in the protests has swelled, with young women not only defying the patriarchal vision of gender roles but also carving out their own leadership roles within the movement. A coherent and organized student movement has, at its heart, young female high school and university students leading it. The viral incidents during protests are driven by young women defying older male figures looking to silence them. They are not only gaining support from their male comrades but are garnering sympathy and empathy from citizens writ large. This alone marks a cultural revolution that can change traditional ideas surrounding gender roles, and women’s position in society. Alongside this, the creativity seen within the protected protest centers highlights the significant generational gap that exists now between the majority of Iraqi citizens — the MENA region’s youngest population — and its political leadership. The protests have produced artistic graffiti, rap videos, and citizen journalism as modes of political activism and civic engagement. As one female human rights activist noted, “The protest movement has managed to achieve in a matter of weeks, what we have worked ten years to achieve.”

The protests are also consistent and precise in their demands. There are the abstract calls for the removal of the current political elite, however it is partnered with a constructive transition process, and modalities to improve transparency and governance. As violence has contributed to the growing strength of the movement itself, it has further developed into a movement that bears witness to the state’s crimes. Accountability powers people to come out to protest.

The region is no stranger to social movements, nor is Iraq immune from instability. The violent response to the protests has worked to show the hand of the government and the varying militias. However, it has also shown its limitations. Pessimistic voices would argue that we are heading toward increased violence that will eventually evolve into a renewed conflict. While this remains a significant risk, more violence against an unarmed protest movement is neither desired nor warranted on the part of the state. In any case, the protesters have earned the right to explore a new identity for the country. But whether this social change can morph into a coherent political movement that can prove itself ready and able to take on power is a question that remains unanswered. It is a question for the movement, but also for those current leaders that can find the political courage to stand up from within. In supporting the movement to develop a more egalitarian, transparent, and accountable political system, they can avert another conflict in the country and begin building a durable and strong society that governs its people in a fair, just, and equitable manner.

Hafsa Halawa is a non-resident scholar at the Middle East Institute and an independent consultant working on political, social and economic affairs, and development goals across the Middle East and North Africa (MENA), and Horn of Africa regions. The views expressed in this piece are her own.