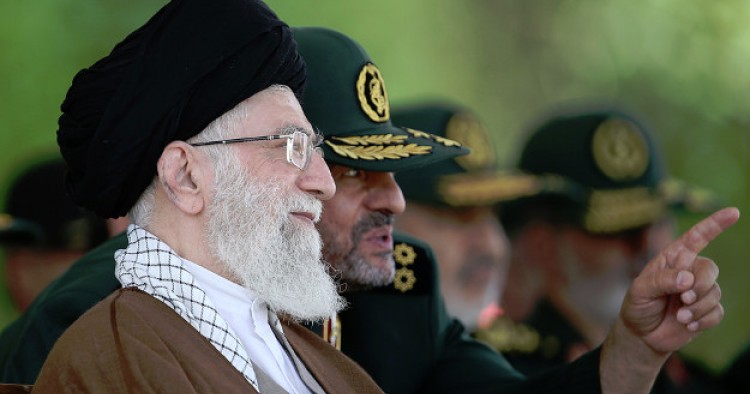 The chief commander of the Islamic Revolution Guards Corps (I.R.G.C.) says Iran’s revolution has now “crossed borders,” is expanding, and has defeated the “Arrogance” – a term Iranian leaders use for the United States. “This revolution has now turned into an instrument for the expansion of the Islamic revolution and promotion of the God’s religion around the world,” Major General Mohammad Ali Jafari told a gathering of I.R.G.C. commanders and top clerics on Tuesday. He  boasted that Iran’s regional proxies – what he termed as the “resistance front” – are exporting Iran’s revolution across the region, and stressed that Iranian youth are also more motivated now to defend the revolution, including in foreign countries, than they were during the Iran-Iraq war in the 1980s. He further explained that the country’s “Islamic revolution is at its third stage, which is the establishment of the Islamic government” around the world. “The main threat to our country is the danger of antirevolutionary vision based on American Islam that exists in the country,” he warned, in an implicit criticism of Iranian politicians and activists who advocate for improving ties with the West.

Comment: The remarks by the top I.R.G.C. commander indicate that the Islamic Republic remains committed to exporting its revolution abroad 38 years after Ayatollah Khomeini toppled the Shah and established the clerical regime in Tehran. Last November, Major General Yahya Rahim Safavi, a top military advisor to Supreme Leader Ali Khamenei and former I.R.G.C. commander, also claimed that a global Islamic government would soon be established with its axis in Iran.

I.R.G.C. leader’s provocative rhetoric and actions also validate claims by Washington and its allies that Iran is pursuing an expansionist agenda at the expense of stability and security in the Middle East. On March 9, Gen. Joseph Votel, the top U.S. general responsible for American security interests in the Middle East and Central Asia, said that Iran seeks to be the “regional hegemon” and poses “the greatest long-term threat” to regional stability. "We are also dealing with a range of malign activities perpetrated by Iran and its proxies operating in the region," the Centcom commander told the Senate Armed Services Committee.

Jafari’s remarks are also an unfortunate reminder that that the Iranian government has not changed its destabilizing behavior and ambitions in the Middle East despite the nuclear accord it signed with the United States and five other world powers in 2015. Quite the opposite, as noted in Jafari’s statements, the I.R.G.C. is emboldened by the growing power of its proxies forces in Syria and Iraq, and is trying to expand its influence in the broader region.